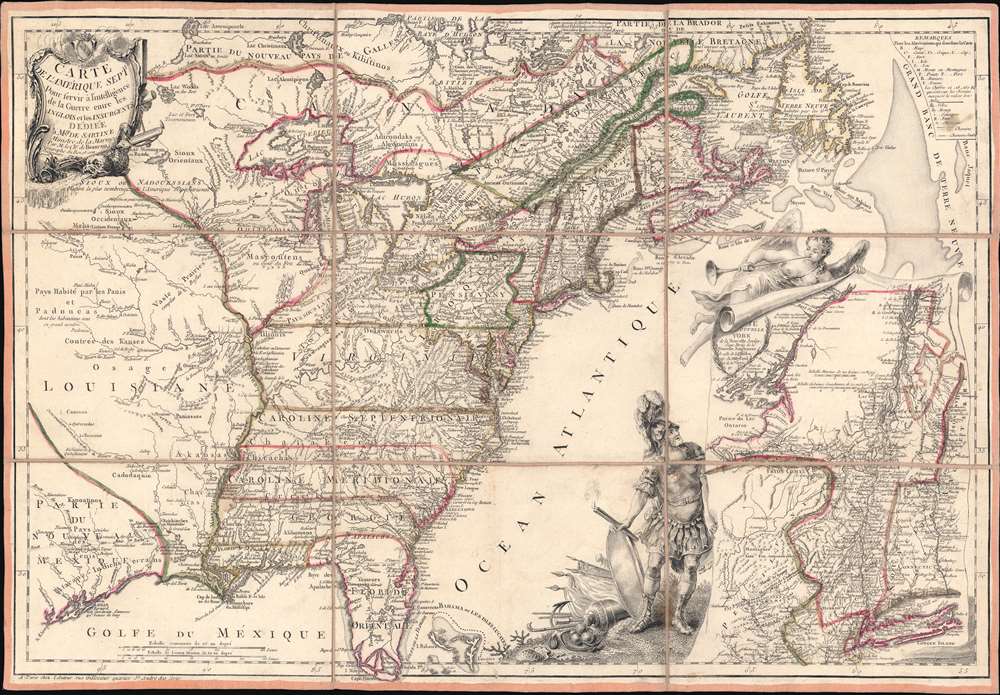 Mars, the God of War, look on as Fame proclaims the of the Birth of the United States.

This is a rare 1777 Jean-Baptiste Jacques de Beaurain map of the United States during the American Revolutionary War, issued in anticipation of French entry into the war on the side of the revolutionaries. The map includes a bold illustration of the goddess Ossa (fame) unrolling an expansive map of the Theater of War in the Hudson corridor, proclaiming the newly formed United States. Mars, the god of War, looks on, shield and torch in hand, his arsenal ready - much like France itself. This map is thus an instrument of propaganda intended to prepare the public for French participation in the American Revolution - an event which followed in early 1778.

Coverage extends from the Great Plains and Texas to the Atlantic, and from the Hudson Bay to the Florida Keys. Many of the colonies extend westward to the Mississippi, and the border with Spanish Louisiana (1762 - 1801), underscoring the French hopes that they will be able to reclaim their former colony, lost in the French and Indian War (1754 - 1763). The inset details the Hudson Valley corridor from New York to Montreal - a critical theater of the war where, in the year this map was issued, the Battles of Saratoga (September 19, October 7, 1777) saw the British soundly defeated and set the stage for French entry into the war.

The map is dedicated to Antoine de Sartine, then Ministre de la Marine, who was actively preparing charts and maps in anticipation of French participation in the American Revolution. Sartine was strongly pro-colonial and used his influence with the crown to argue for French aid to the Americans. Beaurain, in aligning himself with Sartine, is here declaring his own support for the fledgling United States.

Like many of Beaurain's maps, this map is based upon British sources - with whom he maintained close contacts. The main map is derived from John Mitchell's famous 1755 map Map of the British and French dominions in North America. But it is no slavish copy. Rather, Beaurain has incorporated extensive revision and updating to reflect changes following the French and Indian War, as well as the creation of new provinces, forts, and towns throughout. The inset map in the lower right is a miniature of the 1775 edition of Thomas Pownall's The Provinces of New York, and New Jersey; with part of Pensilvania and the Province of Quebec, an important Revolutionary War Era map in its own right.

This map was published in 1777, likely mid-year, but before the Battles of Saratoga in the fall of that year. It was published in Paris, France. No engraver is named, but it is likely in the hand of Beaurain himself. Examples are scarce. We note multiple entries in the OCLC, but all but six, some of America's most venerable institutions, are 'digital resources'. Scarce to the market.

Jean-Baptiste Jacques de Beaurain (1728 - c. 1785) was a French Geographer and military historian. He was born in Paris, the son of 'Géographe du Roi' to Louis XV, Jean de Beaurain (1696 - 1771). In 1765, Jean-Baptiste inherited his father's title 'Géographe du Roi' in 1771, this time to Louis XVI (1754 -1793), and in 1771 was awarded an annual royal pension of 800 pounds - something he was proud of and often incorporated into his imprint. He issued various military histories and military atlases, as well as tutored the King in geography. Beaurain was exceptionally active during the American Revolutionary War, when new cartography regarding the fledgling United States was in high demand in France. During this time, he maintained connections to British cartographers, particularly William Faden. Despite a royal pension and a wide corpus of publications, in 1785 Beaurain, possibly mired in debt accrued by his father, declared bankruptcy. No further maps are recorded and he may have died shortly thereafter. Learn More...