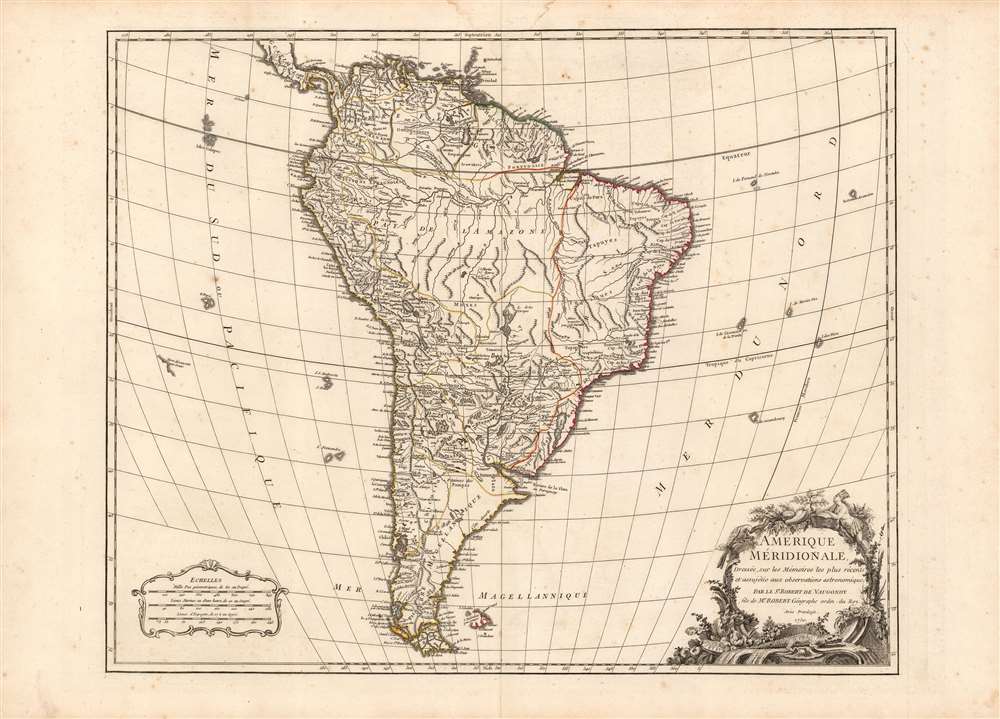 This is a beautiful 1757 map of South America by Gilles Robert de Vaugondy. It covers the continent from Panama to Tierra del Fuego and Cape Horn. Excellent detail appears throughout, depicting mountains, rivers, forests, swamps, cities, and a host of additional topographic features.

Differences from the First State

Vaugondy identifies the mythical Laguna de Xarayes, supposed gateway to paradise or El Dorado, as the northern terminus of the Paraguay River. The Xarayes, a corruption of 'Xaraies' meaning 'Masters of the River', were an indigenous people occupying what are today parts of Brazil's Matte Grosso and the Pantanal. When Spanish and Portuguese explorers first navigated up the Paraguay River, as always in search of El Dorado, they encountered the vast Pantanal flood plain at the height of its annual inundation. Understandably misinterpreting the flood plain as a gigantic inland sea, they named it after the local inhabitants, the Xaraies. The Laguna de los Xarayes almost immediately began to appear on early maps of the region and, at the same time, almost immediately took on a legendary aspect. Later missionaries and chroniclers, particularly Díaz de Guzmán, imagined an island in this lake and curiously identified it as an 'Island of Paradise'.

To the west of Chile, in the South Pacific Ocean, Vaugondy identifies the 'Land discovered by Davis', roughly where Easter Island is today. Terre de Davis or Davis' Land was supposedly discovered in 1688 by an English navigator of the same name. Many historians argue whether or not Davis Land was actually Easter Island, but it does seem likely.

The cartouche of the first state of this map, as classified by Pedley, appears to have been unfinished. The features at the top of the cartouche - the parrot, the Indian princess, the cocoa pod, and the chili pepper - were all present. The lower half of the cartouche's frame was much more Spartan, with a single and not-very-impressive alligator at the lower left of the privilege and date. The cartouche engraver's imprint - 'Gobin fecit' - lurks apologetically below. The present example is the second state of the map, and here the cartouche is artistically far superior. The upper elements are - from the Indian's ankle on up - unchanged, but below that the frame of the cartouche is much more substantial. A sculpted base, overgrown with flowers and vines, with a peck of peppers piled at the lower left and a more accomplished alligator arranged attractively at the bottom center of the cartouche. Gobin's imprint does not appear, but no other has been added to replace it.

This map was drawn by Robert de Vaugondy and first published in 1750. This example, though containing the same date, was published in the 1757 issue of Vaugondy's Atlas Universel. Some thirteen examples of various states of the map are separately catalogued in OCLC.


(?) Gobin (fl. 1743 - 1753) was a French engraver, specializing in decorative cartouches. His output appears to have overwhelmingly in the service of the maps of Robert de Vaugondy. Pedley speculates that Gobin dies in 1753, as no work appears with his signature after that date. Learn More...