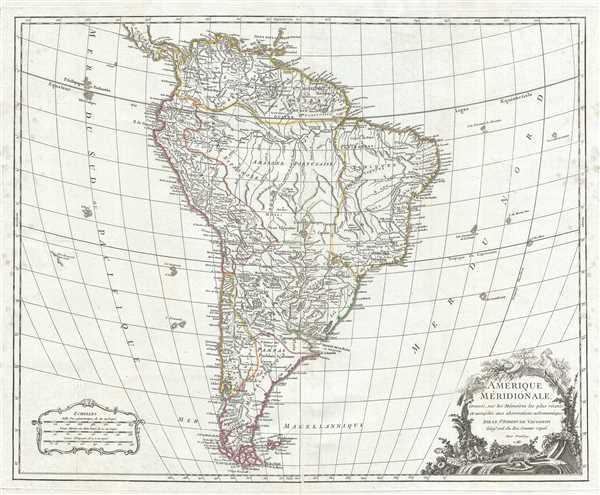 This is a beautiful 1783 map of South America by Robert de Vaugondy. It covers the continent of South America from Panama to Tierra del Fuego and Cape Horn. It offers excellent detail throughout showing mountains, rivers, forests, swamps, cities and a host of additional topographic features.

Vaugondy identifies the mythical Laguna de Xarayes, supposed gateway to paradise or El Dorado, as the northern terminus of the Paraguay River. The Xarayes, a corruption of 'Xaraies' meaning 'Masters of the River', were an indigenous people occupying what are today parts of Brazil's Matte Grosso and the Pantanal. When Spanish and Portuguese explorers first navigated up the Paraguay River, as always in search of El Dorado, they encountered the vast Pantanal flood plain at the height of its annual inundation. Understandably misinterpreting the flood plain as a gigantic inland sea, they named it after the local inhabitants, the Xaraies. The Laguna de los Xarayes almost immediately began to appear on early maps of the region and, at the same time, almost immediately took on a legendary aspect. Later missionaries and chroniclers, particularly Díaz de Guzmán, imagined an island in this lake and curiously identified it as an 'Island of Paradise'.

To the west of Chile, in the South Pacific Ocean, Vaugondy identifies the 'Land discovered by Davis', roughly where easter Island is today. Terre de Davis or Davis' Land was supposedly discovered in 1688 by an English navigator of the same name. Many historians argue whether or not Davis Land was actually eastern Island, but it does seem likely.

The lower right quadrant depicts an elaborate title cartouche with illustrations of an Indian woman, an alligator and a parrot. This map was drawn by Robert de Vaugondy and published in the 1757 issue of his Atlas Universal.

Rumsey 3353.102. Pedley, Mary Sponberg Belle et Utile: The Work of the Robert de Vaugondy Family of Mapmakers, 470, state 3.
Looking for a high-resolution scan of this?