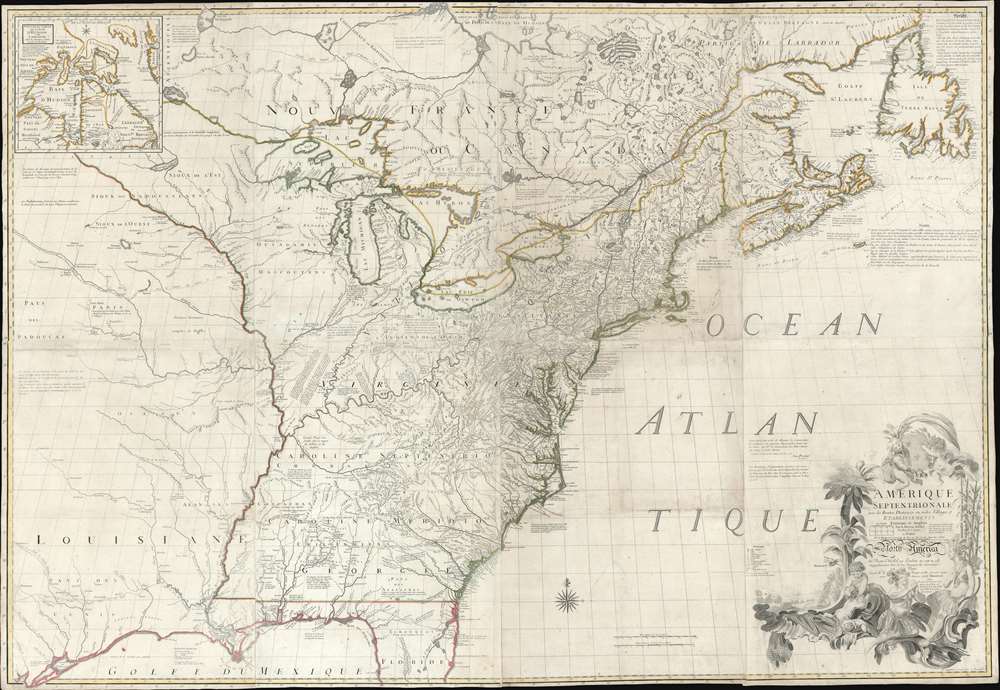 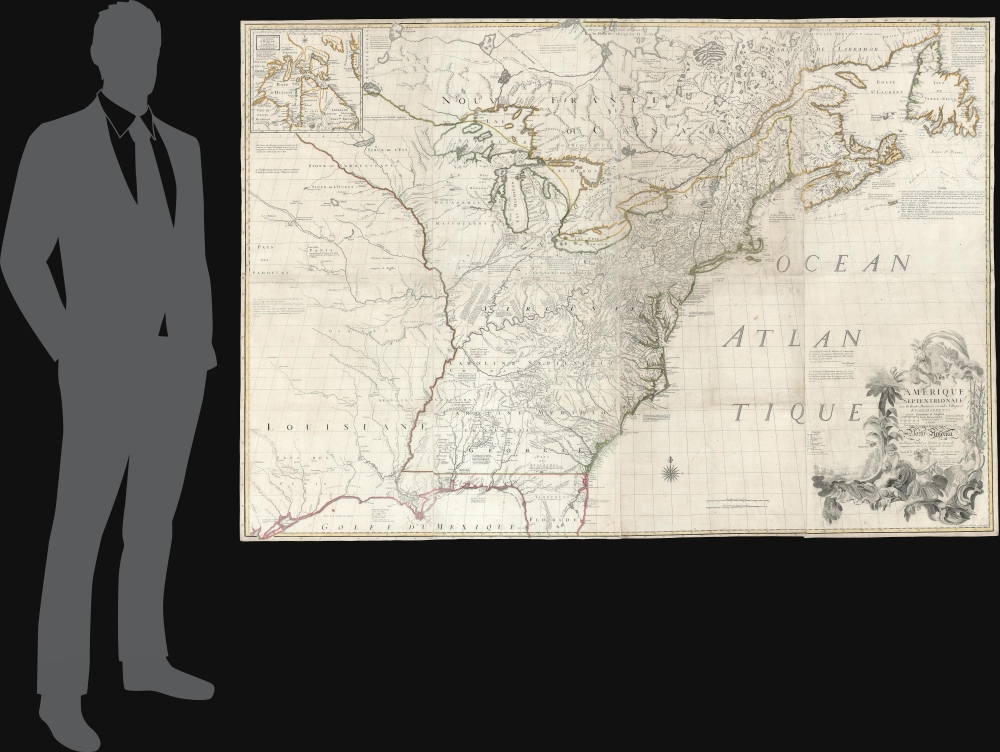 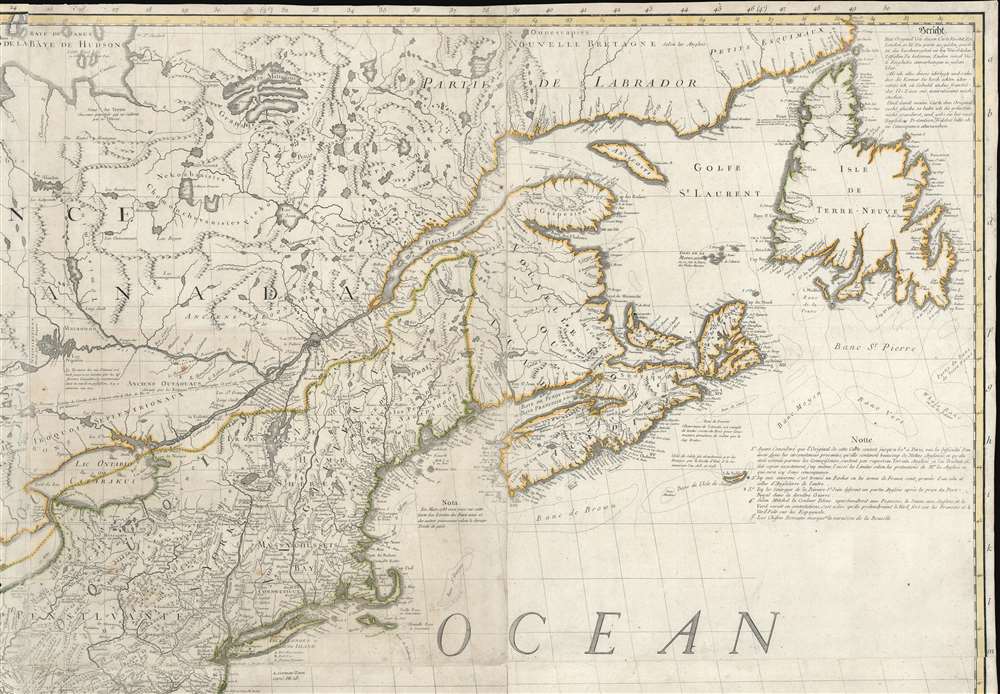 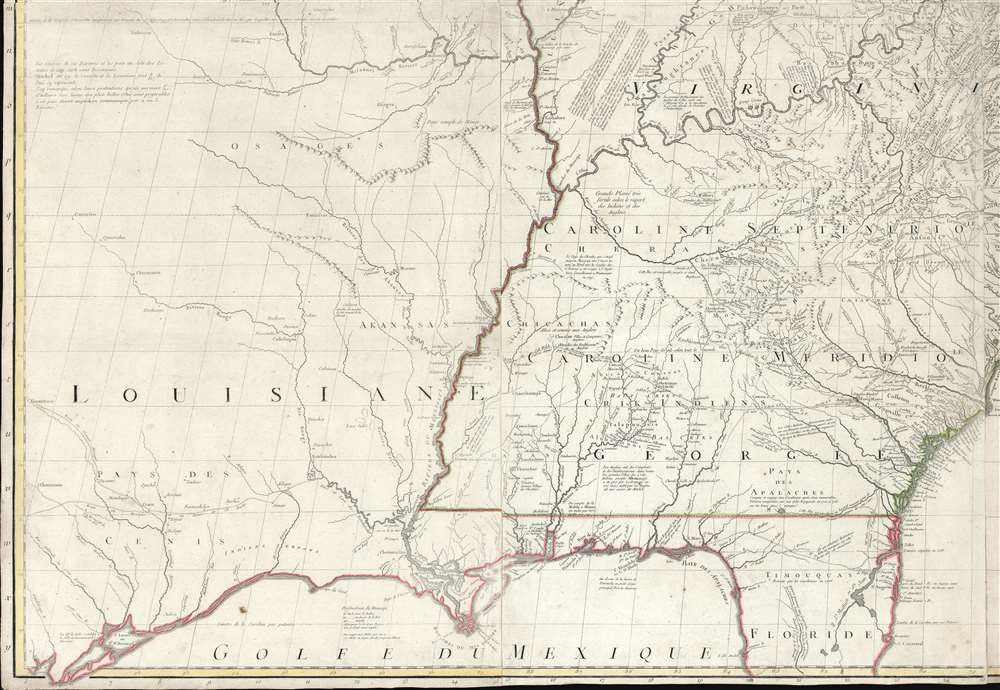 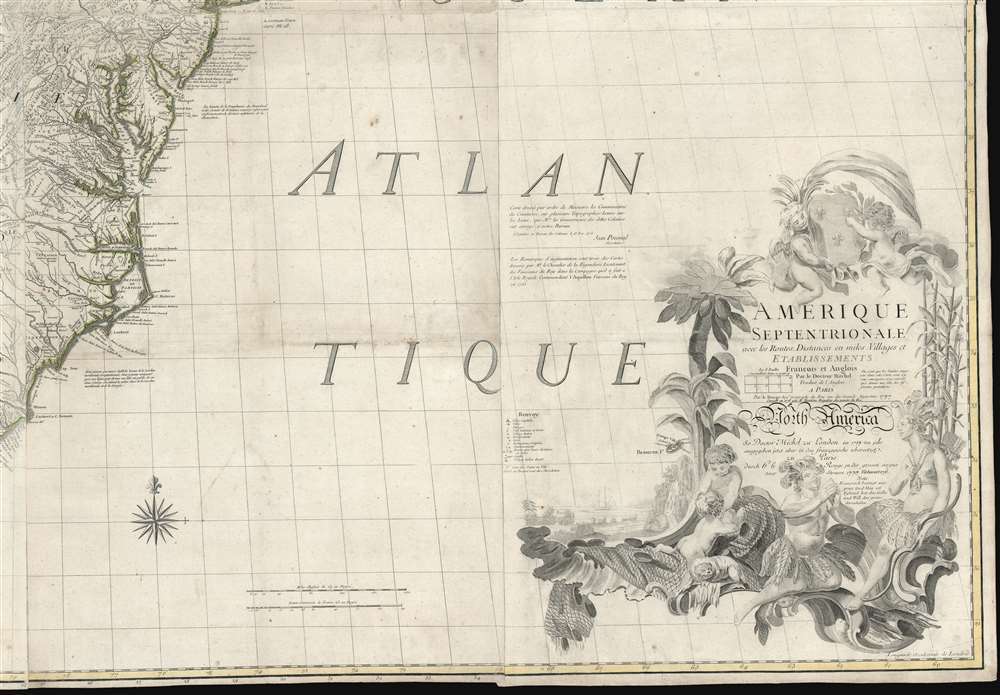 This is the rare and important 1777 Georges Le Rouge French edition of the seminal John Mitchell map of the eastern part of North America. The Mitchell map is considered the single most important map in 18th century American History. It was used as a primary reference for nearly every treaty and boundary dispute in colonial North America from the French and Indian War (1754 - 1763) through the late 19th century. The map is all the more astounding for the fact that this is Mitchell's one and only map - a truly remarkable work of virtuosity.

The Origins of the Map

Prior to 1749, John Mitchell was not a mapmaker. He was an educated man, to be sure, a botanist, physician, and general intellectual. His education and charisma made him a favorite in British intellectual circles. His connection with Virginia, made him the de facto London high society expert on all things American. With this in mind, George Montagu Dunk, 2nd Earl of Halifax (1716 - 1771), at the time head of the British Board of Trade, asked Mitchell to make a detailed large-scale map of the French and English colonies in America. Mitchell took to the project the characteristic earnest dedication.

This was a time of increasing political tensions and overlapping colonial claims. While embracing the most up-to-date cartographic sources, Mitchell advocated a very pro-British cartographic value system - expressing British claims to their fullest extent. As a propaganda mechanism, it was a brilliant move on the part of Halifax. By producing the most geographically advanced map, he expressed British intellectual dominance. By, at the same time, over-stating British territorial claims, he effectively produced a product that superseded the earlier French maps by J. B. B. D'Anville and others, that previously dominated the cartographic conversation. The marriage of geographical exactitude and political propaganda would prove a potent combination.

John Jay used a copy of the third edition during the negotiations of what would become the Treaty of Paris (1783). Thomas Jefferson recommended that Nicholas King use Mitchell's map in preparing a new map for Meriwether Lewis, saying: 'it was made with great care we know from what is laid down in those western parts with which we have lately become acquainted.'

To get even a partial sense of the historic uses to which the map was put, we quote Col. Lawrence Martin, the second chief of the Library of Congress Geography and Map Division:

[Mitchell's map] is thought to have been in use in the British House of Commons during the debate on the Quebec Act of 1774; it is known to have hung in the halls of Congress in 1802 and several times subsequently. It was used ... in the discussions of British land grants in the Ohio and Mississippi valleys, and in scores of controversies involving the boundary lines existing at the time of its publication. Great Britain and the United States agreed to its official status in the Convention of September 29, 1827.... it exerted substantial influence in the negotiation and ratification of the Webster-Ashburton Treaty of 1842, and serious argument was based upon it by Great Britain before the Court of Arbitration at The Hague in 1910 in connection with the North Atlantic Coast Fisheries Arbitration. It was submitted in evidence before the Law Lords of the British Privy Council in 1926 in the appeal of Price Brothers and Company, Limited, from a judgment of the supreme court of Canada, and in 1926-27 in the Canada-Newfoundland (Labrador) boundary case. It was used as evidence before the Supreme Court of the United States in the Wisconsin-Michigan boundary case, in 1926-27 in the Great Lakes level case, and in 1932 in the New Jersey-Delaware boundary case.

Mitchell's map was first published by Andrew Millar in 1755 - one year after the outbreak of the French and Indian War. The first issue was followed by a second edition in 1757, which added additional textual content regarding Mitchell's soured material. After Mitchell's death in 1768, the plates were purchased by Jefferys and Faden, who revised the map and issued a third edition in 1773-74. Faden published a fourth edition in 1775, with the title changed to A Map of the British Colonies in North America. Numerous editions followed, including the present French edition, as here, which despite pro-British content, was still the premier map of easter North America. Covens and Mortier also issued Dutch edition - which is extremely scarce on the market. All examples are desirable, with the first three British editions published in Mitchell's lifetime holding primacy. The present Le Rouge edition, is the only full-size example of the Mitchel reasonably obtainable by collectors, and as such, is highly desirable.

John Mitchell (April 13, 1711 – February 29, 1768) was and British-American mapmaker of great significance. He is known for one and only one map, the 'Mitchell Map', considered the most important map in 18th century American history. Mitchell was born in Lancaster County, Virginia, the son of a prosperous planter and merchant. Like many of his social peers, he was educated in Europe, at Scotland at Edinburgh University, where he studied medicine. Mitchell practiced medicine in Virginia for a short time prior to the French and Indian War. He was elected to the original American Philosophical Society in 1744. In 1745 Mitchell argued that a series of epidemics occurring in Virginia were due to unsanitary troop ships from Britain - at the time a revolutionary idea. He relocated to London in 1746 - presumably for the agreeable climate. Mitchell never practiced medicine in London, but was known to be an avid botanist, and was considered an exotic plant expert in London society circles. He was elected as a fellow of the Royal Society in November 1748, his candidature citation describing him as

A Gentleman of great merit and Learning, who Some time Since communicated to the Royal Society a very curious dissertation concerning the Colour of the skin in Negroes, and who from his long residence in Virginea, and from his great application to the Study of Natural history, especially Botany, is very well acquainted with the vegetable productions of North America, being desirous of being admitted a fellow of the Royal Society, is recommended by us from our personal knowledge of him as highly deserving the Honour he desires, as we believe he will be (if chosen) a usefull and valuable member of our Body.

As an educated American adopted into British high society, Mitchell became the de facto expert on all matters North American. In 1749, during a time of ever-increasing political tensions between British and French interests in America, Lord Halifax contracted Mitchell to produce a large and detailed map of British and French dominions in America. While embracing the most advanced geographical data, Mitchell also advocated pro-British interpretation of political boundaries. The resulting map was thus geographically unimpeachable and reframed the cartographic perspective from French to British terms. The map proved significant and was used in most subsequent treaties. Michell issued 3 editions in his lifetime. He died in London in 1768. Learn More...