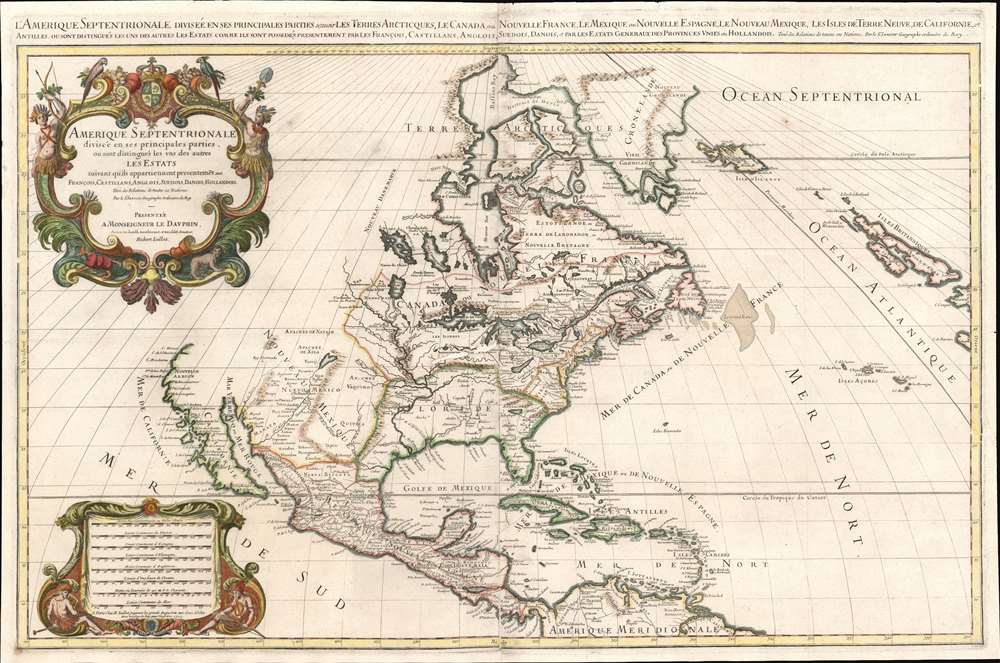 An impressive and scarce 1719 elephant-folio map of North America issued by Alexis-Hubert Jaillot on an impressive scale. This is the scarce final edition of Jaillot's map featuring numerous updates to California, the Mississippi Valley, and the Eastern seaboard. After the first edition, it is considered the most important due to its many significant changes reflective of the most up to date discoveries and speculations. The map covers all of North America and Central America from Baffin Bay to the Spanish Main. It extends westward to include a highly sepculative California and eastwards past the Azores to include the British Isles.

Jaillot derived this expanded format map from the earlier work of Nicholas Sanson, a figure who revolutionized French cartography. We can trace the fundamental design of this map to two Sanson maps. First, his 1666 map of North America - on which most of the basic cartography is based. Second, his 1657 map of California, which influenced the rise of the Insular California theory - despite the fact that in this 1719 edition, the northern part of Insular California has been removed reflecting general acceptance that California was not an island. The present edition is further influenced by the 1698 map of Louis Hennepin and the cartography of René-Robert Cavelier, Sieur de La Salle.

Jaillot's map also offers a ephemeral perspective on the Great Lakes. While all five lakes are present, Lake Superior (Lac de Tracy) and Lake Michigan (Lac des Illinois) are definitively lakes, a major change over earlier editions wherein these lakes were open at their westernmost extremes, thus illustrating the primitive sate of exploration in the region as well as the high hopes of European monarchs that one of these lakes may provide a passage to the Pacific and the lucrative markets of Asia. Lake Huron is identified according to its original Huron-Petun (Wyandot) name, Karegnondi (tr. 'Big Lake').

The Mississippi River, is relocated well to the west of its actual position, with its mouth corresponding roughly to the Sabine River. Although incorrect, this change represents a major advancement over previous maps in this series. Earlier states conflate the Mississippi with the Chucagua, which is here also mapped roughly where the actual Mississippi enters the Gulf of Mexico. Jaillot's reasoning behind this relocation relates to the cartography of Father Louis Hennepin, who issued an influential map corresponding to this error in 1698, and the subsequent cartography of La Salle.

In Spanish Florida, which extends north to include most of the American Southeast, Lake Apalache, often called Lacus Aquae Dulces or the 'Freshwater Lake of the American Southeast' is noted. This lake, first mapped by De Bry and Le Moyne in the mid-16th century, is a mis-mapping of Florida's Lake George. While Theodor De Bry, working in 1565, correctly mapped the lake as part of the River May or St. John's River, subsequent navigators and cartographers in Europe erroneously associated it with the Savannah River, which instead of Flowing south from the Atlantic (Like the May), flowed almost directly from the Northwest. This error was taken up by Hondius and Mercator who, in their 1606 map, invert the course of the May River thus situating this lake far to the northwest in Appalachia. Consequently, 'through mutations of location and size [this] became the great inland lake of the Southeast' (Cumming, 478) – an apocryphal cartographic element that would remain one of Le Moyne's most tenacious legacies. Lake Apalache was subsequently relocated somewhere in Carolina or Georgia, where Jaillot maps it and where it would remain for several hundred years.

This map was first issued independently as early as 1674, but was not published in Jaillot's spectacular L'Atlas Nouveau until 1681. The present edition is dated 1719, is identified by Burden as the final state. Unlike earlier states, which exhibit only minor changes over the first edition, the present example exhibits extensive updating and re-engraving, marking it as the most significant state after the original 1674 first edition.