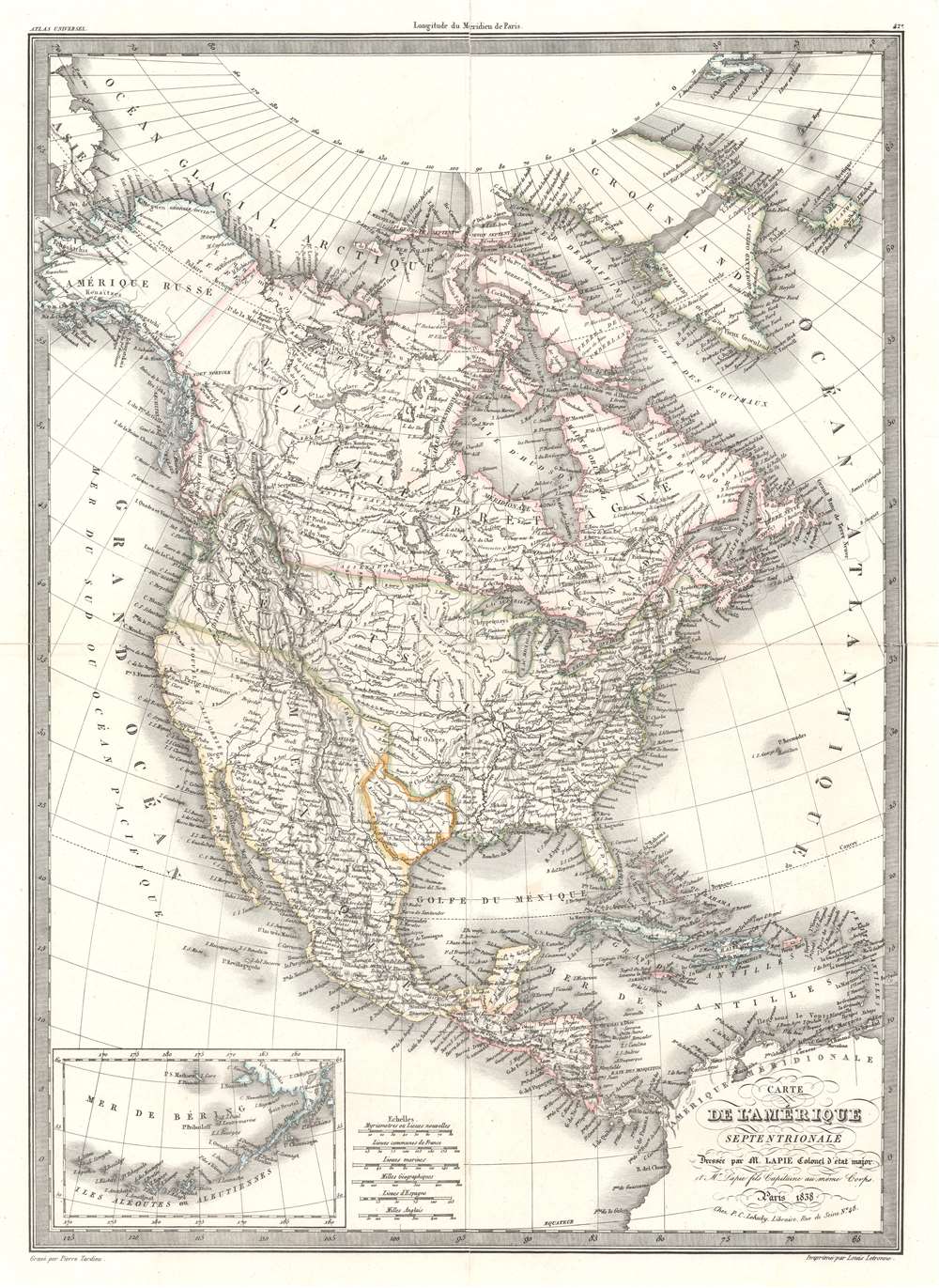 French recognition of the Republic of Texas.

A fine example of Lapie’s 1838 map of North America. The map covers the entire North American continent and Greenland, embracing the Caribbean. An inset in the lower left corner details the Bering Sea and the Aleutian Islands. This map was engraved by Armand Joseph Lallemand as plate no. 42 in the first edition of Lapie’s important Atlas Universel, and it was retained in later editions major updates by Pierre Tardieu. The hand color this example conforms to that of the 1838 edition, which is of significance because it is with color that the mapmaker illuminates the political borders on the map, particularly that of the Republic of Texas.

When Texas ceded from Mexico on April 21 of 1836, it immediately sought legitimacy through diplomatic appeals to major world powers - most of which were in Europe. Most European powers were reluctant to recognize the self-proclaimed Republic until it became clear that it could survive and what diplomatic ramifications, if any, formal recognition might yield. Nonetheless, France under King Louis Philippe recognized Texas on September 25, 1839. This act may have been partially trade inspired, and partially motivated by French antipathy towards Mexico following the First French Intervention or Pastry War (1838 - 1839). Recognizing Texas diplomatically allowed France to open official trade channels, particularly for cotton, a vital commodity in Europe and an increasing cause of tension between France and Britain. Moreover, the recognition of Texas accelerated the destabilization of Mexico, increasing the probability that any colonial aspirations the French may have had in potentially seizing California (something they were considering) would be successful.

Greenland is shown bisected by a massive strait, extending from Ilulissat (formerly Jakobshavn) in the west to Traill Island in the East. Frobisher's Strait began appearing on maps in southern Greenland following Sir Martin Frobisher's 1574 expedition to locate the Northwest Passage. When Frobisher returned from his voyage, he declared that he had discovered a strait with America on one side and Asia on the other, which he of course named after himself. It quickly became evident to his contemporaries that he had been mistaken about his true location, but had, in fact, been traveling through a strait near Greenland. This strait, still known as Frobisher's Strait, quickly began to appear on maps of the era. Cartographers and other explorers, however, could not completely agree on the correct location for Frobisher's Strait, which is we believe to be the reason for not one, but three different straits across southern Greenland in this work by Bellin.

This map was among those created by Pierre and Alexandre Lapie and engraved by Armand Joseph Lallemand for publication as plate no. 42 in the 1830 and later editions of their Atlas Universel de Géographie Ancienne et Moderne. It was subsequently updated by Pierre Tardieu, as here, and republished in many editions, with the present example exhibiting updates to 1838. We find separate examples (catalogued as 1830 issues) only at Florida State University and the University of Texas at Arlington. Various editions of the Atlas Universel appear in many institutional collections, eleven of which are of 1838 editions.

Good. Centerfold repair on verso. Laid down on archival tissue.