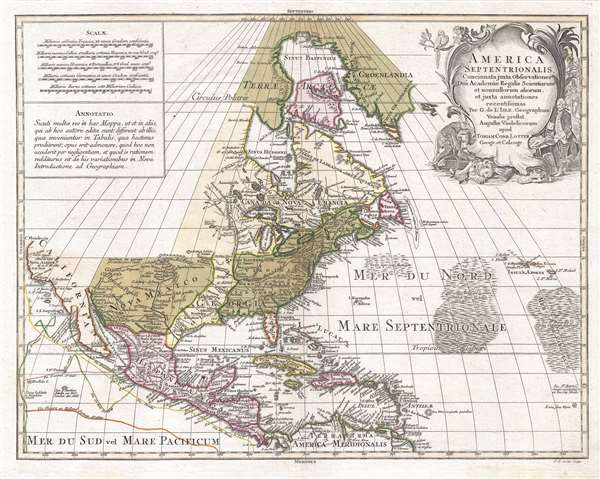 A visually striking c. 1772 old color Tobias Conrad Lotter map of North America. Centered roughly on New York City, the map covers from Baffin Bay to the northern part of South America and from California to the Azores. Cartographically the map is based upon the c. 1700 work of the French cartographer Guillaume de L'Isle. Nonetheless, it is not without updates and revisions.

The map reveals a post-French and Indian War (1754 - 1763) / Pre-American Revolutionary War (1775 – 1783) political configuration. The English colonies have extended tehir claims westward as far as the Mississippi. Louisiana is still distinct, but in fact, at this time, all of Louisiana west of the Mississippi had been ceded to Spain for its assistance against France in the previous war. Florida at this time, also distinct, is a British territory per the 1763 Treaty of Paris, however, it would be returned to Spain in 1783.

Since the map is drawing from a c. 1700 source, it is notable that California, while initially appearing peninsular, has indistinct borders, suggesting uncertainty with regard to whether it is an island or a peninsula. In the late 17th and early 18th centuries it was briefly believe that California was an island and it appears and many maps of the period as such. Although this dispute had been technically resolved as early as 1710 by the writings of the Italian Jesuit Eusebio Francisco Kino, whose travels in the region definitively proved that California was in fact a peninsula, cartography in Europe was often derivative and some map publishers, like Lotter here, were slow to adapt the most up to date data.

Also of interest, the map depicts the speculative Island of St. Brendan (San Borondón) in the midst of the Sargasso sea near the right border. Supposedly San Borondón is the 8th Canary Islands. Legend attributes its discover to the Irish monk St. Brenden, who it is said, discovered it in the 15th century. The island, according to the legend, is nearly impossible to reach for a number of mystical and mysterious reasons: it moved, it was shrouded in mist, surrounded by violent storms, and inhabited by 'fire-hurling demons.' Nonetheless, through religious zeal and perseverance, Brenden reached the island, where he established a church and lived for six years. One day, the island began to move and at last, sink. Brenden and his cohorts fled back to Europe where they shared their fabulous tale. The island was repeatedly sighted throughout the 16th, 17th, and 18th centuries, but finally disappeared from most map by the early 19th century. Today myth-mongers conflate St. Brenden's Island with the apocryphal island of Atlantis.

This map was published by Tobias Conrad Lotter in Augsburg, Germany. The map was engraved by Lotter's oldest son, Georg Friedrich Lotter.