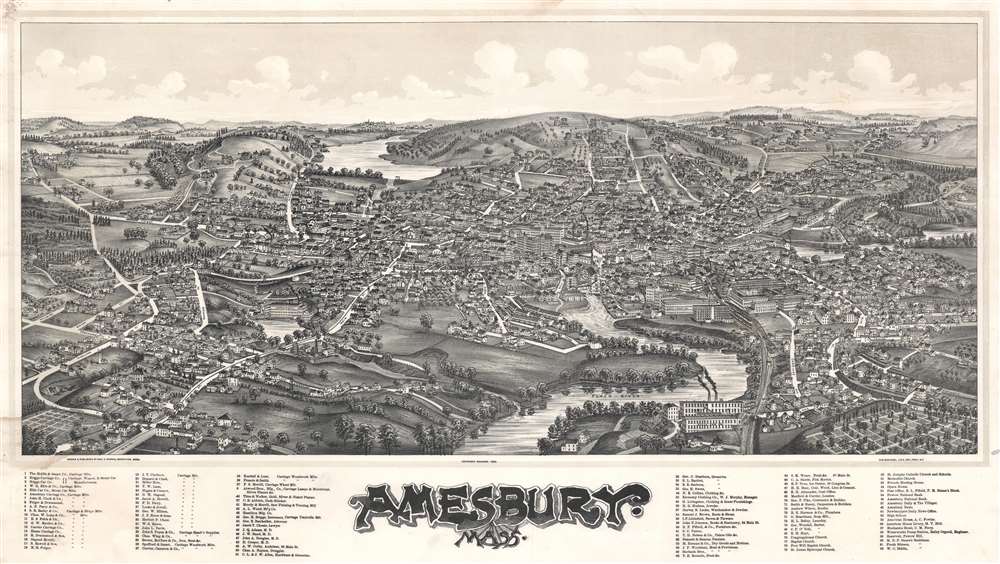 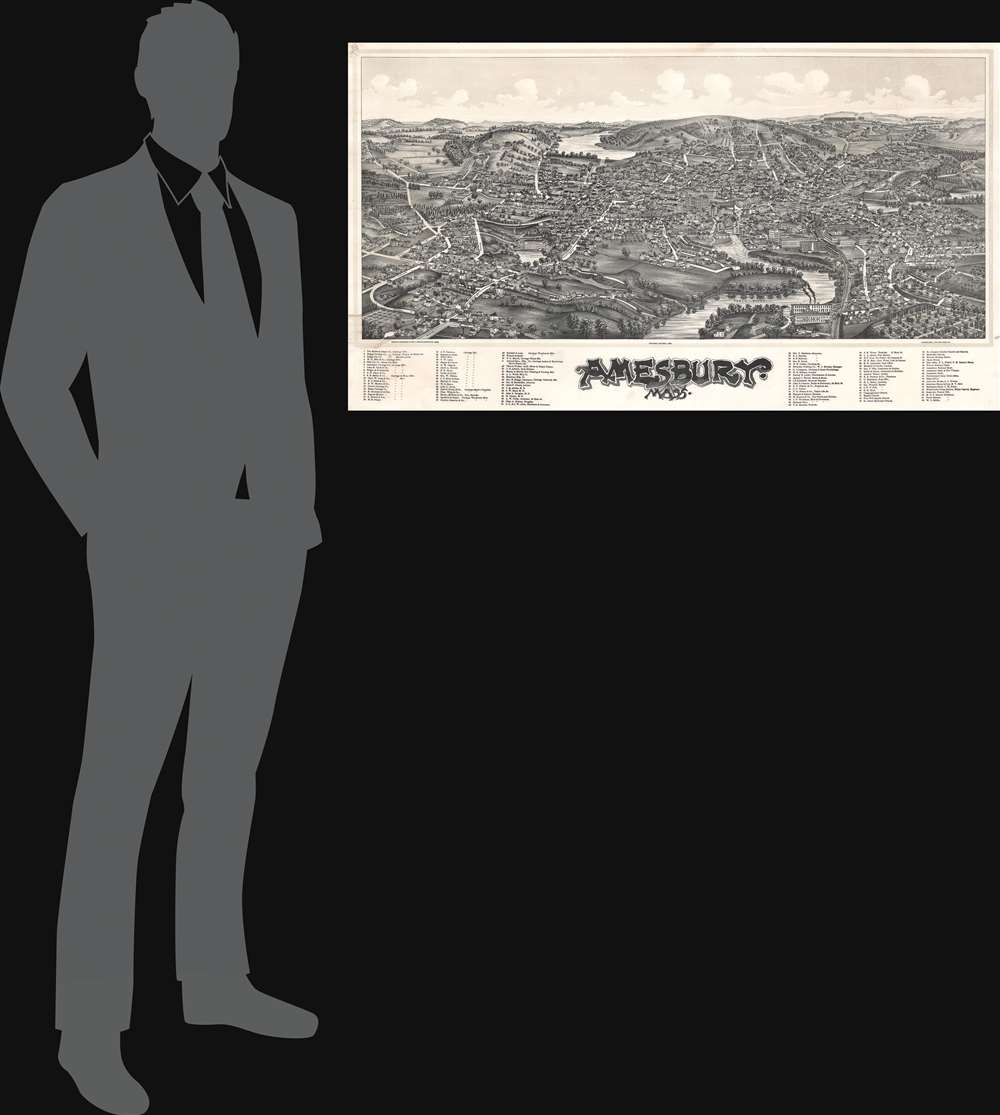 A stunning George E. Norris and Lucian Burleigh bird's-eye view and map of Amesbury, Essex County, Massachusetts. The view looks northeast on Amesbury from a high point above the Merrimack River. The Powwow River, which runs through town, appears at center. Mt. Prospect cemetery appears in the lower right. Main Street angles in from the lower let comer until it changes to School Street at top center. Some 92 important locations are noted, ranging from schools and churches, to local businesses. A rakish art nouveau title give evidence to the emerging aesthetic. The view follows the Great Amesbury Fire of 1888, when much of the town center burnt to the ground - here rapid rebuilding and urban renewal give evidence to the city's resilience and prosperity.

This view emerged at the height of Amesbury's prominence as a carriage manufacturing center, a fact underscored by the more than 40 here named businesses dedicated to that industry. Carriage making in Amesbury began in 1853, when Jacob R. Huntington (1829 - 1908), considered the father of the Amesbury Carriage, starting a small factory. It is estimated that by 1890, when this view was issued, more than 10,000 Amesbury shops and factories were involved in the carriage trade. The success of the Amesbury Carriage is based upon a grass-roots cottage industry, built upon the collaboration of many small shops, rather than dominant large-scale manufactories - although to be sure these existed too. Many of these old carriage factories still stand and today Amesbury hosts the 'Amesbury Carriage Museum.'

This is the second and largest of the three known bird's-eye views of Amesbury. The first was issued in 1880 by Beck and Pauli. This, the second view appeared ten years later in 1890, by Lucian Burleigh and George E. Norris. The third was not issued until 1914 by Hughes and Bailey. We note but one other surviving example, that being located at the Library of Congress and in inferior condition.

George E. Norris (1855 – 1926) was an American hotelier, publisher, and bird's-eye view artist based in Brockton, Massachusetts during the latter part of the 19th century. Norris began publishing views in partnership with Albert F. Poole, an established view maker who, at the time, was renting a house in Brockton from Norris' mother. His first views, most of which were signed by Poole, were published in 1883. In 1884 Norris partnered with Henry Wellge, publishing out of Brockton as Norris and Wellge, and later out of Milwaukee as Norris, Wellge and Co. Noris began drawing views independently around 1887. Most of these were printed by Lucien Burleigh of Troy New York. In total, Norris produced about 135 individual city views. In 1897 he left the view business to open a hotel, the Hotel Norris, in Brockton. Meeting some success in this field, in acquired the Hotel Grayson, also in Brockton, in 1912. He ran this until his death of cerebral hemorrhage in 1926. Learn More...


Lucian Rinaldo Burleigh (February 6, 1853 – July 30, 1923) was an American lithographer and view maker active in the latter part of the 19th century. Burleigh was born in Plainfield, Connecticut and studied civil engineering at Worcester County Free Institute of Industrial Science (Worcester Polytechnic). There he studied under George E. Gladwin who specialized in field sketching. Burleigh became one of Gladwin's prized students and this no doubt influenced his choice to become a viewmaker. Burleigh's view work stands out for two reasons. One, most of his town views are drawn form a lower than usual point of view enabling him to take greater advantage of profile perspectives. Two, his views do not integrate people or animals – most late 19th century American view artists added horses, people, carts, dogs, and even chickens to their views. Between the years of 1883 and 1885 Burleigh produced some 28 views of New York towns and cities. Most of these were published by either Beck and Pauli of Milwaukee or C. H. Voght of Cleveland. After 1886, Burleigh established his own Troy press and subsequent views were published in-house. Burleigh also worked as a lithographer for other view makers including J. J. Stoner and Albert Ruger, among many others. Burleigh contributed to the production of about 228 lithographic city views and personally drew about 120, marking him one of the most important and influential viewmakers of the 19th century. Learn More...