1818 Hall Map of the Yangtze River, China, and the Amherst Embassy 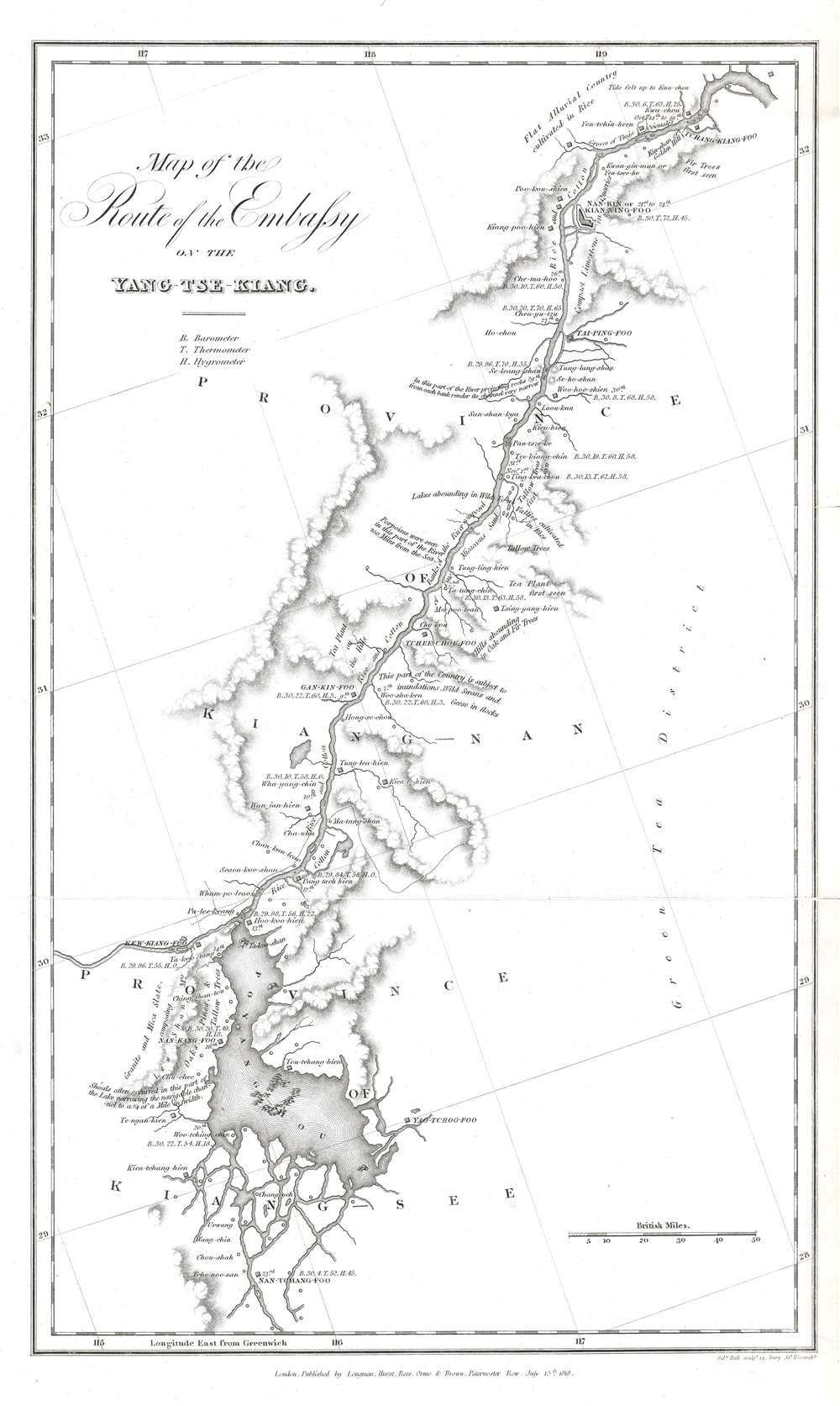 1818 Hall Map of the Yangtze River, China, and the Amherst Embassy

Comments on the region's wild birds and the porpoises seen in the river.
$400.00

This is an 1818 Sidney Hall map of part of the Yangtze River in China. Depicting from Zhenjiang south to Poyang Lake, incredible detail and additional commentary provide astonishing insight into a part of the Amherst Embassy's journey from Beijing to Guangzhou. Nearly all the commentary refers to the terrain and characteristics of the river, including riverbank composition, channel width, and navigation hazards. The features of the surrounding land are also remarked upon, such as the crops grown and whether the terrain was flat or hilly. One comment states that porpoises were seen in the river, while others wonder at the number of wild birds living in the area, including geese and swans. Cities, like Zhenjiang and Nanjing, are identified, as are numerous other towns and villages along the way. This map was reduced from a larger map produced by the Jesuits and included greater detail than the Jesuit map.

The British Crown sent William Pitt Amherst, 1st Earl Amherst (January 14, 1773 - March 13, 1857) as ambassador extraordinary to China's imperial court in 1816. Upon his arrival in China, he was met with some hostility and told that in order to be admitted to the Jiaqing Emperor's presence, it would be necessary for him to perform the kowtow (a reverential ritual done before the Chinese emperor in which one kneels and then bows so low that their forehead touches the floor). After receiving advice from the officials who accompanied him, Amherst refused to kowtow. He did offer one possible alternative, that an admission be made that the same reverence was owed to the British sovereign by Chinese when in their presence, just as Macartney had done in 1793. This stipulation was denied, and Amherst was refused entry into Beijing (Pekin), making his mission a failure. He and his party then set off south to Guangzhou (Canton) to sail back to Britain. This excursion overland was arranged before Amherst and his party left the Alceste after arriving in China. After meeting the Alceste in Guangzhou, she wrecked off Indonesia and the survivors were finally rescued from Batavia. This second ship stopped at St. Helena, where Napoleon had been exiled, and Amherst met the exiled French emperor. Amherst finally arrived back in England in 1817.

Abel, C. Narrative of a journey in the interior of China (London: Longman, Hurst, Rees, Orme, and Brown) 1818.

Very good. Verso repairs to fold separations. Blank on verso.
Looking for a high-resolution scan of this?