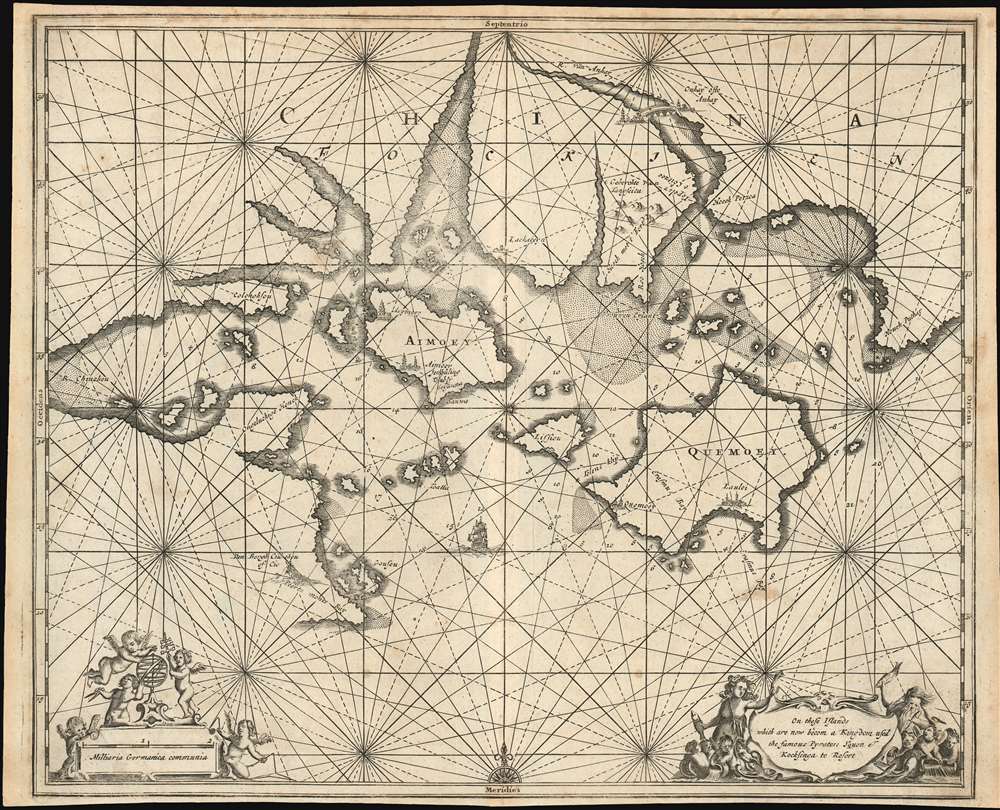 This is a c. 1675 Olfert Dapper piracy map of Xiamen (Amoy), Kinmen (Quemoy), and the Fujian coast in southeastern China. With Xiamen just to the left of center, this map represents the most detailed mapping of the region by the end of the 17th century. Myriad rhumb lines crisscross the map, aiding in navigation, and numerous depth soundings appear as well - something absent in all previous printed maps of the region. Illustrations mark settlements on Xiamen and Kinmen and a bridge crosses the Anhay River, whose modern-day equivalent is unclear. As the map's title suggests, Xiamen and Kinmen were havens for the pirates known in the West as Iquan and Koxinga.

This map was issued during a period when Dutch VOC hegemony in the East Asia trade was being challenged by the English. A careful observer will note that while the map most in Dutch, with Dutch nomenclature, the title and some annotations appear in English. This suggests that the map is derived from a Dutch manuscript (which we have been unable to trace), but updated for an English audience. We know the work was initially published in Dutch, but without maps, as is natural considered that maps of China and the East Indies were considered state and corporate secrets. Altouth the VOC was in decline in the late 17th century, they still exerted enormous power in the Netherlands. The map here was added for the subsequent English and German editions.

Piracy on the South China Sea: Iquan or Zheng Zhilong

Zheng Zhilong (1604 - 1661), was a Chinese pirate, merchant, and political and military leader during the late Ming dynasty and the beginning of the Qing dynasty. Born in Fujian, Zheng left home during his teens, and went to Macau, where he was baptized as Nicholas Iquan Gaspard. He then went to Nagasaki, Japan, where me met a man named Li Dan, the local Chinese headman, who became his mentor. Li Dan introduced Zheng to the Dutch, and Zheng soon found work as a translator for the Dutch, since he spoke Chinese, Japanese, and Portuguese. Li Dan also ran a group of Chinese traders that operated throughout the South China Sea. After Li Dan died in 1625, Zheng inherited this fleet. After acquiring the fleet, Zheng set about expanding it drastically. He adapted European military and sailing technology to his junks, rendering them superior to the Chinese Imperial Navy. This ingenuity allowed Zheng to prosper, and by 1627 he operated a fleet of over 400 junks and tens of thousands of men. He defeated the Ming Dynasty's fleet in 1628.

From Pirate to Privateer to Commander-in-Chief

Soon after this victory, Zheng decided to join forces with the Ming, which led to Zheng's complete dominance of the South China Sea by 1630. He soon operated a fleet of over 800 ships that ranged from Japan to Vietnam. Even though he had a reputation for mercilessly attacking shipping, he also sold 'insurance' to merchants and fishermen, offering them protection in exchange for a fee. At the height of his power, no one dared sail without one of these passes. He also defeated the Dutch East India Company and one of his former pirates in the Battle of Liaoluo Bay on October 22, 1633. Zheng continued to serve the Ming through the war with the Qing, even serving as commander-in-chief of imperial forces after the fall of Nanjing in 1645. He either surrendered himself or he defected to the victorious Qing in 1646, the historical record appears to argue on that matter.

Zheng Chenggong (August 27, 1624 - June 23, 1662), more well known by his Dutch-Romanized Hokkien honorific Koxinga, was a Ming loyalist who fought the Qing in southeastern China during the 17th century. He was also Zheng Zhilong's son and his continued resistance to the Qing precipitated his father's execution. Koxinga first led Ming forces in 1646, while his father was still commander-in-chief. It was during this year that Zheng Zhilong chose to not support the Longwu Emperor, withdrew his forces, and either surrendered himself or defected to the Qing. As a result of Zheng Zhilong's unwillingness to fight, the Longwu Emperor was captured and assassinated by the Qing. Koxinga chose to not follow his father and inherited command of his forces. He quickly recruited more men to the cause and used his superior navy to attack Qing forces along Fujian's coast. Koxinga continued his fight against the Qing until his 1656 defeat at Nanjing, when he and his forces were unable to maintain their siege.

Koxinga in Taiwan and the Philippines

Koxinga elected to attack the Dutch in Formosa / Taiwan in 1661. Koxinga landed his army to the island and laid siege to Fort Zeelandia, which ended in victory on February 1, 1662, effectively evicting the Dutch from Formosa. He also managed to convince the Taiwanese Aboriginal tribes to defect from the Dutch, another key to his success. That same year, Koxinga threatened to invade the Philippines with the goal of evicting the Spanish. His forces raided several Philippine towns, but the full invasion never materialized. Koxinga died in June 1662 of malaria.

This map was published by Olfert Dapper c. 1675. An incredible mix to English, Dutch, and Latin appears on this map. While the exact reason is lost to history, it is likely due to the extensive Dutch presence in the region and the 'extensive trade' conducted by the British East India Company with Xiamen, Koxinga's base of operations, during the 1670s. Four examples of this map are cataloged in OCLC, all with different publication dates. They are part of the institutional collections at the Bavarian State Library, the Erlangen-Nurnberg University Library, the Leiden University Library, and the Birmingham Public Library.