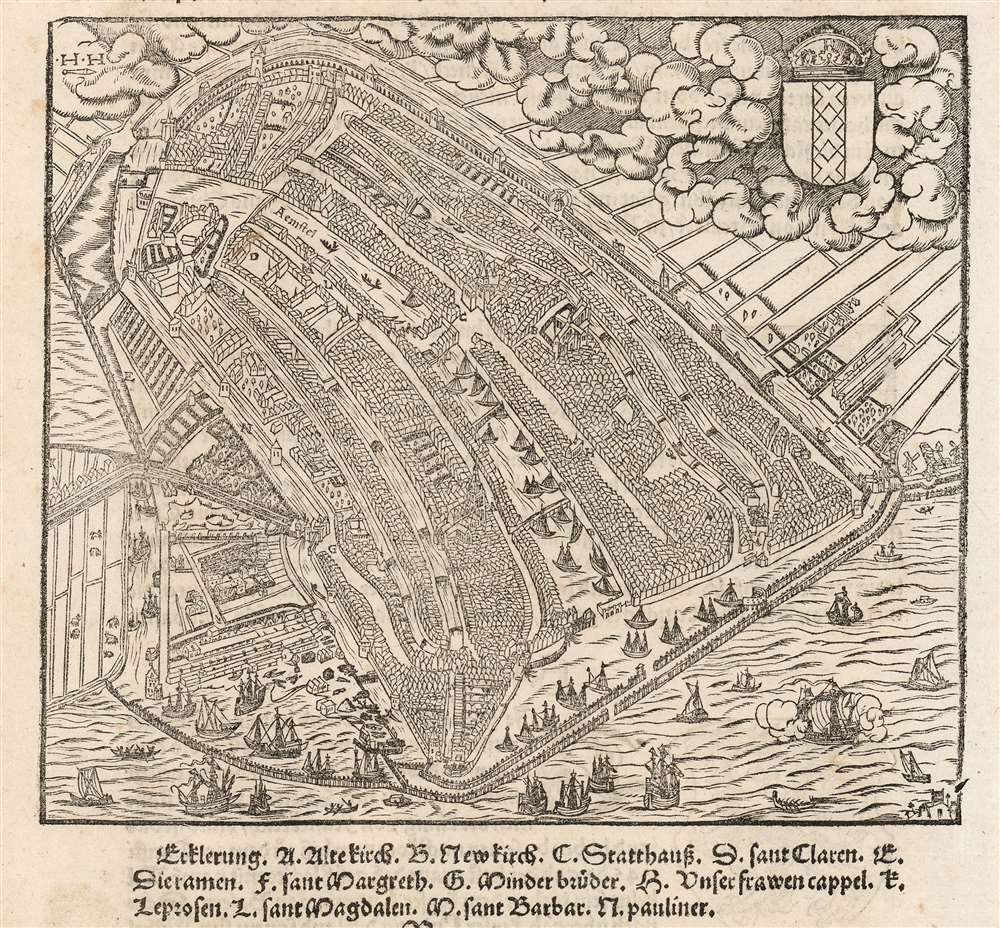 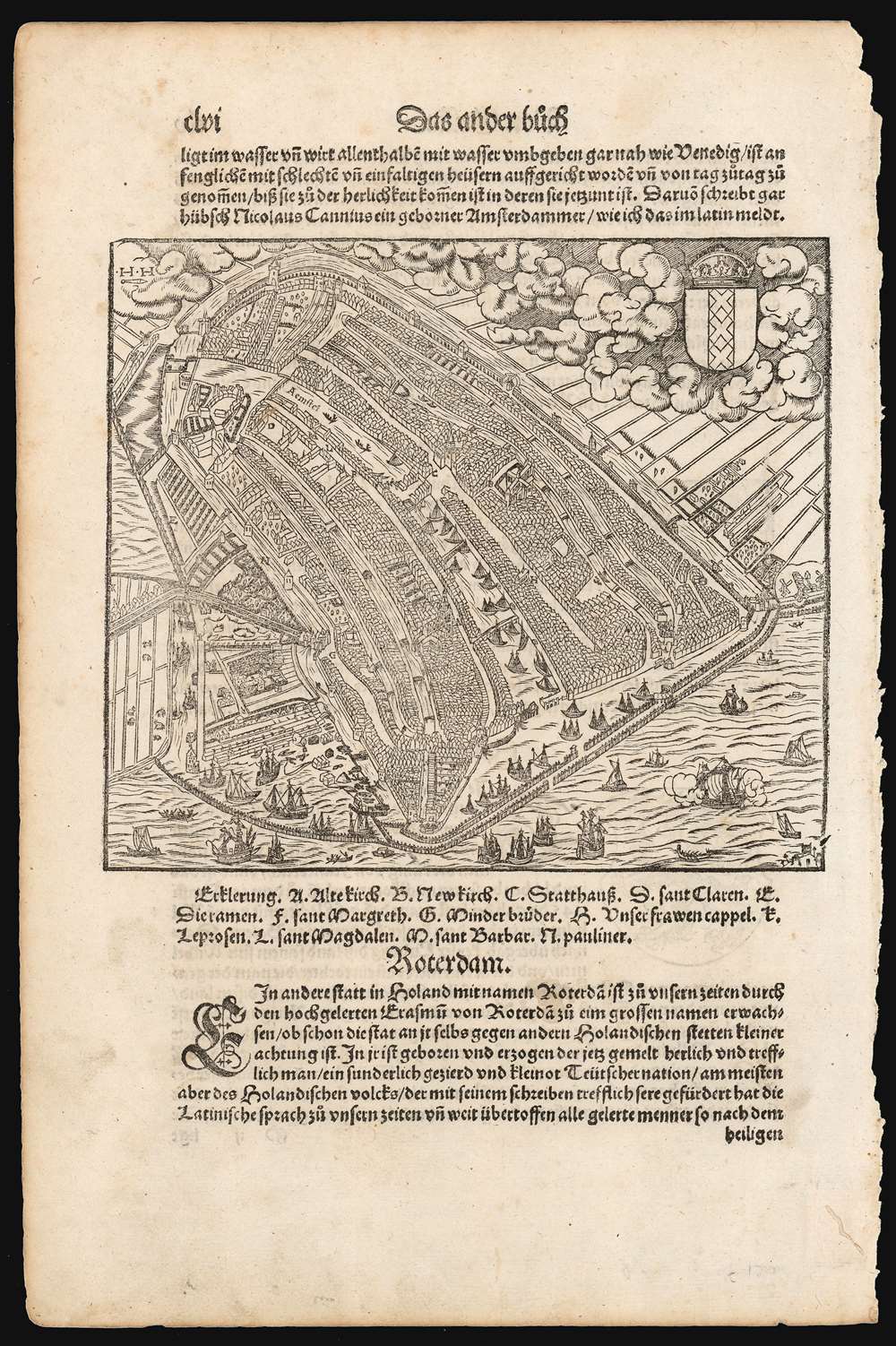 First edition of the earliest printed map of Amsterdam available to the collector.
$500.00

This Sebastian Münster's 1550 view / map of Amsterdam, the earliest acquirable printed map of that city. It was preceded only by the 1544 wall map of Cornelis Anthonisz, Münster's source for this view. Anthonisz's wall map - which survives in fewer than ten examples - represented the best (and only) firsthand depiction of Amsterdam. Its depiction in 1550 by Münster and in 1572 by Braun and Hogenberg established as the dominant 16th century Amsterdam image.

The view is oriented to the southwest. The river Amstel appears to the left, and at bottom the IJ teems with ships. A list of important structures appears below, keyed to the plan with letters. Most are churches, but the old town hall (replaced in 1648) and its leprosarium are also noted. The city arms are displayed at the upper right amidst a cloud background. To the upper left the artist Heinrich Holzmüller's 'H-H' signature can be seen.

The Amsterdam captured in this image, though not yet a seat of a globe-spanning mercantile empire, was nevertheless the most important trade city in the Holland. Is position at the mouth of the Amstel made it an essential grain-trading hub for the Low Countries, and a key link in the European lumber trade. The abundant sailing ships portrayed here express the city's vigorous mercantile activity. And yet, the 'Dutch Golden Age' expansion had yet to occur. Amsterdam's outer ring of canals would not be constructed for another century. And yet, the busy harbor scene depicted here foreshadows the city's later identity as a globe-spanning mercantile empire.

This woodcut accompanied a text on Holland credited to Nicolaus Cannius (1504 - 1555), pastor of the New Church in Amsterdam. It is not coincidental that the only painting of Cannius was made by none other than Cornelis Anthonisz. It is possible that both the text and the image were provided to Münster in the same correspondence. The view appeared at the end of the Holland text, and before Münster's text describing the city of Rotterdam. This has resulted in the alarmingly frequent misidentification of this view as not Amsterdam but Rotterdam - not only by modern cataloguers, but even in some posthumous editions of Cosmographia.

From its first printings in 1544, Münster's Cosmographia was notable for the number of maps and views depicting their subjects for the first time in print, often from residents of the regions shown. In subsequent editions, Münster labored to build the work by ordering the production of improved city views and additional decorative woodcuts. 1550 saw the addition of this cut, along with many other maps and views to appear in the body of the work. Cornelis Anthonisz's 1544 plan of Amsterdam, though a printed work, was not widely disseminated. The present work, superbly executed by formschneider Heinrich Holzmüller, would be effectively the only image of the city available to the literate layperson until the publication of Braun and Hogenberg's 1572 city book. Even after, the long and copious print history of Cosmographia meant that this iteration of Anthonisz's work would have a disproportionate reach.

This woodcut was executed, between 1548 and 1550, by Heinrich Holzmüller for inclusion in the 1550 editions of Münster's Cosmographia. It appeared in all subsequent editions. The present example conforms typographically to the 1550 German-text edition. Only one separate example is listed in OCLC. This woodcut appears on the market, albeit in many different editions and wildly varying condition.


Cornelis Anthonisz (c. 1505 - 1553) was a Dutch painter, engraver, and mapmaker. He was born in Amsterdam, the grandchild of painter Jacob Cornelisz van Oostsanen, from whom he probably learned painting. In 1538 he was commissioned by the city fathers to paint the first complete map of Amsterdam, as a gift to Charles V. He would thereafter produce a number of woodcuts, including his 1544 view of Amsterdam. This was a wall map, printed to twelve woodblocks. While only seven examples of this plan are known to survive, it was copied in smaller format by Münster in 1550 and Braun and Hogenberg in 1572, thus sealing its authority as the best map of Amsterdam available in the sixteenth century.

He also produced portraits of heads of state, allegorical prints. Two of his paintings survive that have been attributed to him. Learn More...


Heinrich Holzmüller (fl. 1541-1559) was Swiss goldsmith, calligrapher and formschneider who worked in Berne and Basel, notably producing woodcuts for Sebastian Münster's 1550 Cosmographia, in which he typically signed his work with the sign 'HH'. As is the case with such artisans, virtually nothing is known of his education or life details beyong his work itself, although he is thought to have been from Solothurn. Learn More...

Very good. Marginal mend and filled wormhole well away from printed image, some marginal soiling, else excellent with a bold, fresh strike.