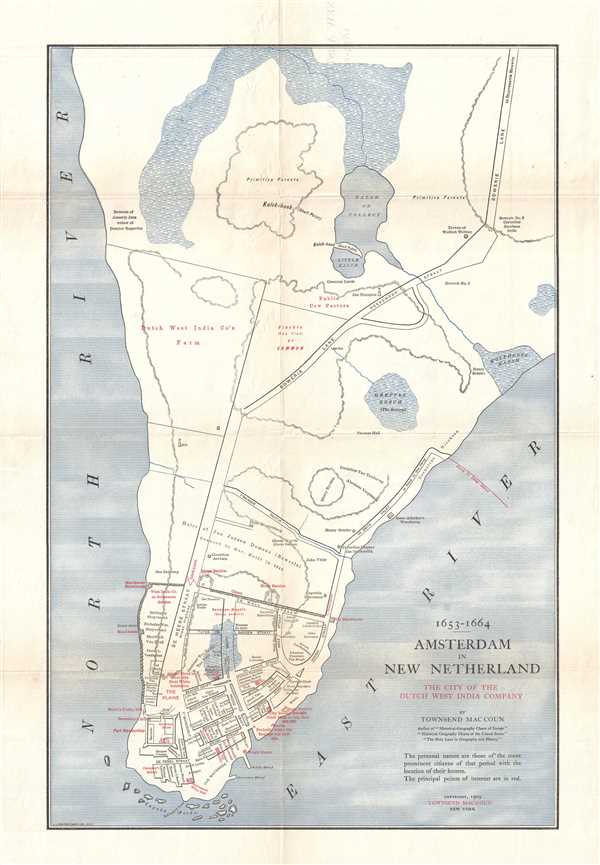 Illustrates the city of New Amsterdam from its incorporation to its surrender to the English.

This is a 1909 Townsend MacCoun city map or plan of the colony of New Amsterdam, now known as New York City, between 1653 and 1664. Located on the southern tip of Manhattan, the map depicts the region from the Hudson River to the East River and from Midtown to the Battery. The colony itself, however, is confined to the southernmost extreme of Manhattan from Wall Street to the Battery. Streets are illustrated and labeled throughout the settlement, as is Fort Amsterdam and the Wall that gave Wall Street its name. the residences of prominent citizens are labeled within the settlement as well, as are numerous other 'points of interest'. Outside the walls, several farms are labeled by the owner's name (including the Dutch West India Company Farm), along with streets, a mill, and Wolfert Webber's tavern.

The Colony of New Amsterdam

Originally founded in 1624 by the Dutch West India Company, New Amsterdam gained municipal rights on February 2, 1653, officially becoming a city. The city remained under the control of the Dutch until August 27, 1664, when four English frigates sailed into New Amsterdam's harbor and demanded the city's surrender. On September 6, Peter Stuyvesant, the director of New Amsterdam, sent six delegates to sign the official Articles of Capitulation, and the settlement was reincorporated as New York City in June of the following year.

This map was created by Townsend MacCoun and engraved and printed by the L.L. Poates Engraving Company in 1909.

Townsend MacCoun (1845 - September 10, 1932) was an American cartographer, publisher and historian active in the second half of the 19th and early 20th centuries. Townsend was born in Troy, New York, the son of John T. MacCoun and Angelica Rachel Douw (Lane) MacCoun. MacCoun attended Williams Collage, from which he was awarded degrees in 1866 and 1869. His composed several cultural and geographical works, including a history of the United States, another of the Holy Land, and a series of five historical maps of New York City. He also developed and proselytized employing a universal color coding system in all maps appearing in a single book or book series - a technique that remains in use today in many text books. He was a member of the Chi Psi Fraternity, the American Geographical Society, and the Paris Société Academique d'Histoire Internationale. Learn More...