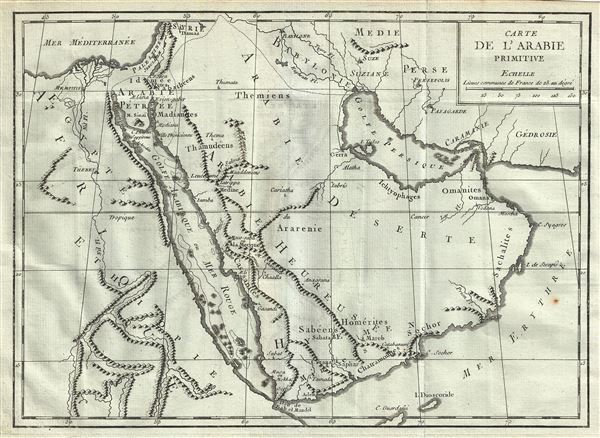 This is an interesting 1782 map by Jean- Baptiste-Claude Delisle de Sales, rendering Arabia, Ethiopia and Egypt in antiquity. Centered on the Red Sea (Golfe Arabique or Mer Rouge), this map covers the entirety of the Arabian Peninsula, the Persian Gulf and the Nile Valley as far south as Ethiopia. The map identifies the sites of forgotten towns, villages and the disposition of lands in the region. Ancient cities of Babylon and Thebes are identified, among others. This particular example used archaic place names. The map also notes rivers and topography, with mountains beautifully rendered. Mt. Sinai is identified. This map was issued as part of Delisle de Sales' Histoire des Hommes. Partie de l'Histoire Moderne. This volume is exceedingly rare as most of Sales' work was burnt under the censorship of heresy.