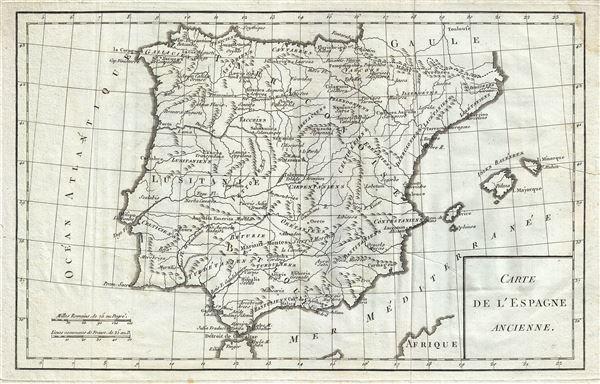 This is a beautiful 1770 map of Ancient Iberia or Spain and Portugal during ancient Roman times, by Jean- Baptiste-Claude Delisle de Sales. The map covers all of Iberia under the Roman Republic from the Atlantic Ocean to the Mediterranean Sea. The map identifies several important cities and towns and uses archaic names throughout. Rivers, islands, and other topography is noted with mountains rendered in profile.

Although the Romans controlled most of the Iberian Peninsula from about 218 BC, it took them close to two centuries to fully subjugate the region. This map was issued as part of Delisle de Sales' Histoire des Hommes. Partie de l'Histoire Moderne. This volume is exceedingly rare as most of Sales' work was burnt under the censorship of heresy.