1867 Hughes Map of the World According to the Ancients (Ptolemy, Srabo, Homer, Herodotus, etc.) 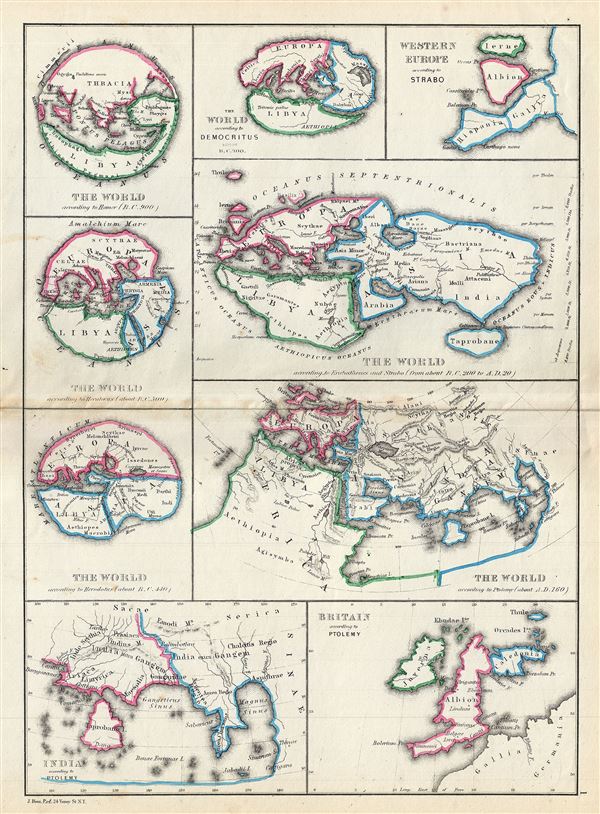 1867 Hughes Map of the World According to the Ancients (Ptolemy, Srabo, Homer, Herodotus, etc.)

A fascinating 1867 map by William Hughes featuring the world according to ancient Greek astronomers, poets, historians and geographers. This map includes nine maps on a single sheet, each illustrating the geographical views entertained at different periods and as expressed by prominent authorities of the time. Of course, the world of the ancient Greeks centered in the Mediterranean and the Americas were yet to be discovered. Europe Asia and Africa (Libya) however were known, leading prominent geographers of the ancient world to adopt the three part world model – a system that would remain in use until the era of Martin Waldseemuller in the early 16th century.

The first map features the world according the Greek poet Homer in 900 BC. He believed the world to be circular, with the river Oceanus flowing around it. Beyond Oceanus in the north, are the Cimmerii, an ancient people of the far north of Europe, described by Homer as the people living in perpetual darkness. He also notes Elysium, the place of the afterlife for the gods and the heroic. Homer in his Odyssey describes it as paradise:

to the Elysian plain…where life is easiest for men. No snow is there, nor heavy storm, nor ever rain, but ever does Ocean send up blasts of the shrill-blowing West Wind that they may give cooling to men.

The map of the world according to Hecataeus (a Greek historian) of Miletus in BC 500, was inspired by Anaximander. Here we see that the world is divided into three continents, Europe, Asia and Libya, and that the western countries of the Mediterranean have gained some form and proportion. The three important seas, the Mediterranean Sea, the Red Sea and the Black Sea divide the three continents and the Caspian Sea is noted. Herodotus, the 'Father of History,' in BC 440 made significant additions geographical knowledge. Having travelled over a great part of the eastern world, he writes in his forth Book of The Histories, 'I wonder then at those who have parted off and divided the world into Libya, Asia, and Europe, since the difference between these is not small; for in length Europe extends along by both, while in breadth it is clear to me that it is beyond comparison larger; for Libya furnishes proofs about itself that it is surrounded by sea, except so much of it as borders upon Asia.....' Herodotus also shows the landlocked Caspian Sea.

The map of the world in BC 300 by Democritus, considered to be the father of modern science and popularly known as the 'Laughing Philosopher,' shows an increase of geographical information, mainly in the easternmost parts. This comes from the information from the conquests of Alexander the Great in the east.

So far, maps were mainly based on an aggregation of facts, without any scientific treatment of geography. Hipparchus of Nice, in about BC 230, was the first to combine geography and astronomy. He determined latitudes and longitudes based on astronomical observations and developed trigonometry. We see this scientific influence in the maps following this period. The map of the World according to Eratosthenes and Strabo from about BC 200 to AD 20, show a much wider Asia. It identifies counties including India, Britannia and Italy. Eratosthenes also calculated the circumference of the Earth using simple geometric relationships. His calculations, made by primitive means, were unusually accurate. Calculations made by modern satellites come very close to his results. Strabo based his map on the knowledge of the Roman expeditions in many parts of the known world.

Ptolemy, the Greek mathematician, astronomer, geographer and astrologer, gathered new information and corrected old errors and gave ancient geography its final shape, until the explorations of Columbus and Vasco De Gama. It is worth noting the superiority of the Ptolemaic system which would come to dominate European cartographic presentation until the discovery of America. His map of the World in about AD 160, as well as his two maps of Asia and Europe may be somewhat difficult to understand at first glance, but upon closer examination, correspond to many actual locations and yield some of their secrets. The Ganges River Valley is readily identifiable as is the island of Tabrobane – an ancient reference to Ceylon. The Indian subcontinent itself is barely discernible. This map's most intriguing element is the southward extension of land running along the eastern edge of the map and extending beyond the border. This landmass reflects speculation, inspired by Ptolemy, that the Indian Ocean was landlocked. It was believed that this landmass extended far southwards before turning westward and connecting with eastern Africa. Though the exploits of Vasco de Gama and Magellan had proven that the Indian Ocean was not fully land locked, it was believed that a large tract of land, possibly even America, attached to Asia west of Malaya. Thus the 'Great Promontory' or 'Dragon's Tail' that appeared on many maps of this region well into the 16th century.

The City of Cattigara, located here in the bottom right corner of the map, is cited by Ptolemy as the southernmost known point. There has been considerable debate about the true location of Cattigara, certainly Magellan and the other great navigators failed to identify it, with some attaching the name to Hanoi or South China and others placing it on the shores of South America. Be as it may, the Ptolemaic model retained a great deal of influence well into the 16th century until Portuguese and Dutch navigators more fully explored the region.< br>
Overall, a fine, collectable, and early piece essential for any serious collection focused on the cartographic emergence of the world. This map was created by William Hughes, printed by J. Bien and engraved by G.E. Sherman, for issued as plate 26 in Sheldon and Company's An Atlas of Classical Geography.