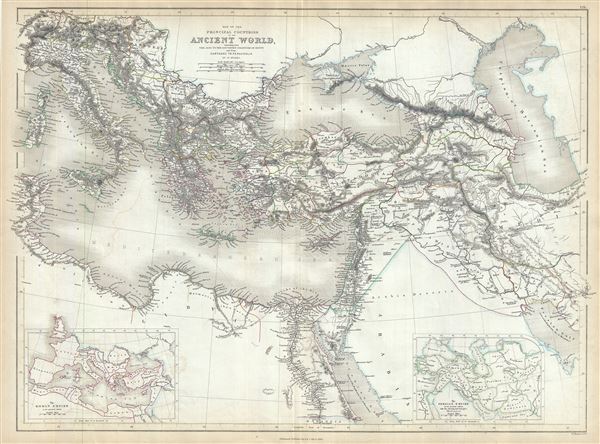 This is a scarce example of Adam and Charles Black's 1844 map of the principal counties of the Ancient World. The map depicts part of the Empire of Alexander the Great and covers from modern day Italy south as far as Egypt and from Corsica to Caspian Sea. An inset map in the lower left quadrant depicts the Roman Empire at its height and another map in the lower right quadrant features the Persian Empire at its height, divided into its Satrapies. Various towns, cities, mountains, rivers, oases and several other topographical details are noted with relief shown by hachure.

Hughes engraved this map to illustrate the conquests of the Macedonian King Alexander III, called ‘the Great,' conqueror of the Persian Empire and at just thirty, ruler of one of the largest Empires in history. Alexander the Great was undefeated in battle and is considered one of the most successful military commanders of all time.

Founded by Cyrus the Great in the 6th century BCE, the First Persian Empire or the Achaemenid Empire was, at its height, the biggest Empire in the world. Cyrus appointed twenty Satraps or provincial administrators that ruled in the name of the king, thus making it possible to rule over the entire territory.

The Roman Empire was established in 27 BC after Gaius Julius Caesar Octavianus, the grandnephew and heir of Julius Caesar was awarded the honorific title of Augustus. During the time of the Empire, Roman cities flourished. Trade spread as far as India, Russia, China and Southeast Asia. However, the sheer size of the empire and its success also contributed to its downfall. The Western Roman Empire collapsed in AD 476, when Romulus Augustulus was deposed by the German Odovacer. The eastern Roman Empire, evolving into the Byzantine Empire, survived until the Ottoman Turks captured Constantinople in 1453.

This map was engraved by William Hughes and issued as plate no. LIX in the 1844 edition of i>Black's General Atlas.