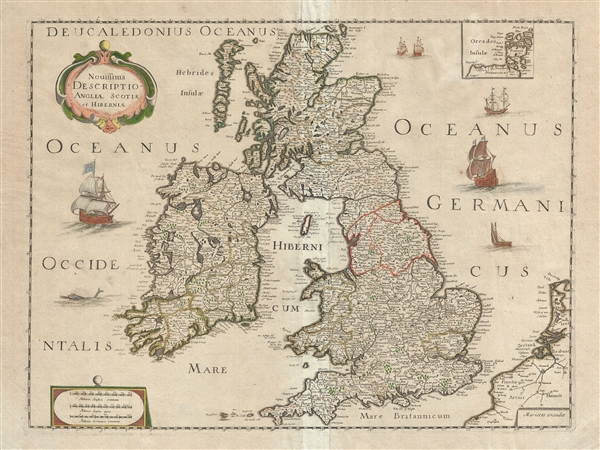 This is a beautiful c. 1650 map of the British Isles by Pierre Mariette and Nicolas Sanson. Covers all of England, Scotland, Wales and Ireland. Includes a small inset of the Orkney Islands in the top right quadrant. Beautifully detailed, it notes important cities, villages, lakes, rivers, islands and other topographic features with mountains and forests rendered in profile. The Wall of Hadrian, fortifications built by the Roman Empire to defend against the unruly tribes of the north, is noted.

In the surrounding waters, ships, galleons and a sea monster are illustrated. A decorative title cartouche adorns the top left quadrant. This map was issued by Pierre Mariette and Nicolas Sanson c. 1650.

Pierre Mariette (1569 - 1657) was a French publisher and engraver active in Paris during the first half of the 19th century. Mariette established himself as successful publisher of art prints, but decided to turn his energy to map with the purchase of Melchior Tavernier map plates in 1644. Tavernier had partnered with Sanson before his death and Mariette followed suite. Around 1644- 1648 Mariette partnered with Nicolas Sanson, a then nascent figure in French cartography, to produce folio maps and atlases. The Sanson-Mariette relationship depended upon Sanson to draw and obtain rights for the maps while Mariette engraved them and paid for the expensive printing process. The two then shared rights to the maps into perpetuity. The finished copper plates were split between two such that neither could publish an atlas without the other's assent. The relationship seemed reasonably amicable until Mariette's death in 1657, when disputes arose between Sanson and Mariette's heirs. A court battle finally returned the most of the plates to Sanson's own heirs in 1674. As a consequence, some printings feature the Mariette imprint, others the Sanson imprint, and still others both imprints. Learn More...