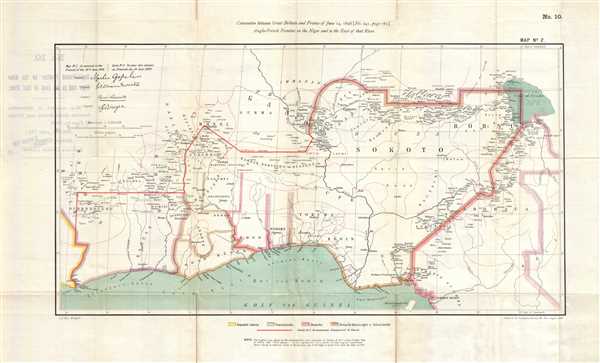 Delineates the border between British and French colonial possessions in West Africa.

This is an 1898 War Office map of West Africa. The map depicts the region from Liberia to Cameroon and from the Niger River to the Gulf of Guinea. Created from Justus Perthe's 1892 Map of Africa solely for the purpose of the Anglo-French Boundary Commission to illustrate the boundary east of the Niger River, 'all superfluous detail having to reference to the boundary east of the Niger, or to the fiscal zone, has been omitted.' Liberia is illustrated on the far left, and then French and German colonial possessions and British colonies and protectorates occupy the rest the map. The Bight of Benin is depicted and labeled. Cities, towns, and villages are labeled, along with some rivers and mountains. Numerous African tribes are identified by name, including the Sokoto, Bornu, Benin, Adamaua, Baule, Gando, and Mossi. Lake Chad is illustrated in detail along the right border. A key, explaining the different colors used to mark the lands claimed by which countries, is situated at center below the map.

This map was produced and printed by the Intelligence Division of the War Office.