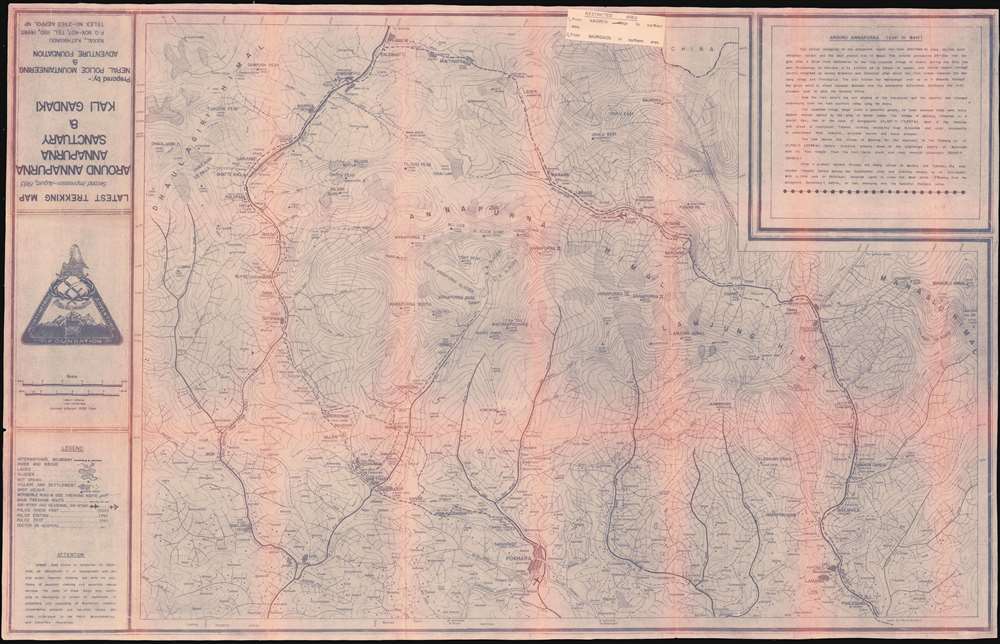 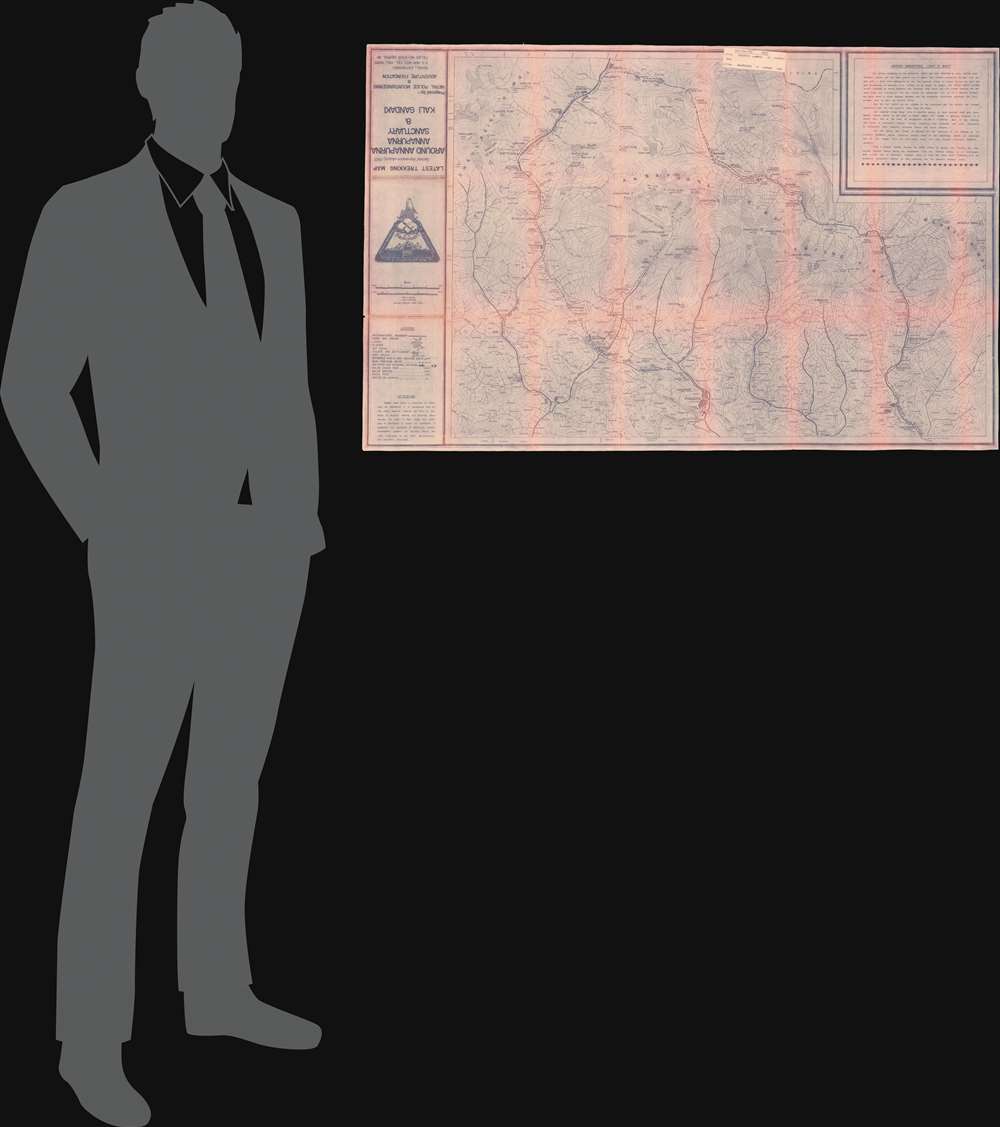 This is a 1983 Nepal Police Mountaineering and Adventure Foundation cyanotype map of the Annapurna Circuit. It is centered on the Annapurna Massif, showing the major towns as well as settlements too small to be named. Typical stops on the trek - Besisahar, Khudi, Bahundanda, Jagat, Dharapani, Chame, Pisang (upper and lower,) Manang, Letdar, the Thorong Pass, Muktinath, Marpha, Lete, Tatopani, Ghorepani, Birethani and Pokhara - are identified. In addition, the trekking path to Annapurna Base Camp via Ghandrung is shown.

The Annapurna area was opened to foreign trekkers in 1977, following the settlement of disputes between the Army and CIA-backed Khampa Guerrillas. The map shows no 'motorable roads' beyond Pokhara, so the trek as shown on this map would not involve any viable automobile roads and could be expected to last as long as 23 days.

An additional note, stapled to the top of the map, indicates that the regions north of Kagbeni and Naurgaon are considered 'restricted' - possibly related to Khampa activity in the region.

The cyanotype map shows rivers and bridges, lakes, glaciers, hot springs, villages and towns, and passable roads, as well as air strips, police stations and check posts, and hospitals. h6>Cyanotype: Why so Blue?Cyanotype is a photo-reprographic technique developed in 1842 by the British astronomer John Herschel (1792 - 1871). Sometimes called a 'sunprint', the technique employs a solution of ferric ammonium citrate and potassium ferricyanide, which painted on white paper or cloth, reacts when exposed to sunlight to dye the object a brilliant blue. Areas blocked from ultraviolet exposure remain undyed and white. Herschel developed the technique to reproduce his astronomical notes, but others quickly realized that any object capable of blocking light could be used to quickly and easily create a cyanotype image. By the late 19th century the process became popular with designers, military, architects, and engineers (blueprints), who used the cheap an effective technique to quickly and exactly reproduce images in the field. Cyanotyping is limited in that only a single copy can be made at one time, so it was only practical for short-term field work. It is also of note that cyanotypes remain extremely reactive to light and, over time, fade or degrade, making them extremely ephemeral. The process fell out of fashion in most places by the 1920s, but remains in use in some parts of the world, such as India and Nepal, to this day.

This map was printed in 1983 by the Nepal Police Mountaineering and Adventure Foundation. While it is not known how many were produced, the cyanotype printing process used was not conducive to large print runs. While we are aware of other maps printed by the NPMAF in price records and auctions, we see no other examples of this one. OCLC lists sixteen examples of a 1987 edition of the map in institutional collections, but only one of the March 1983 first edition. There are no examples listed in OCLC of this August, 1983 second impression.

The Nepal Police Mountaineering and Adventure Foundation was established by Nepalese Police Inspector General Khadgajeet Baral in about 1977 in order to establish mountaineering regimes for Nepali police officials, and to promulgate both mountain conservation and mountaineer rescue services. The NPMAF produced a series of trekking maps in the 1980s, sold in order to support these activities. Learn More...

Good condition. Toning of mimeographed image at folds, some mended wear at junctures.