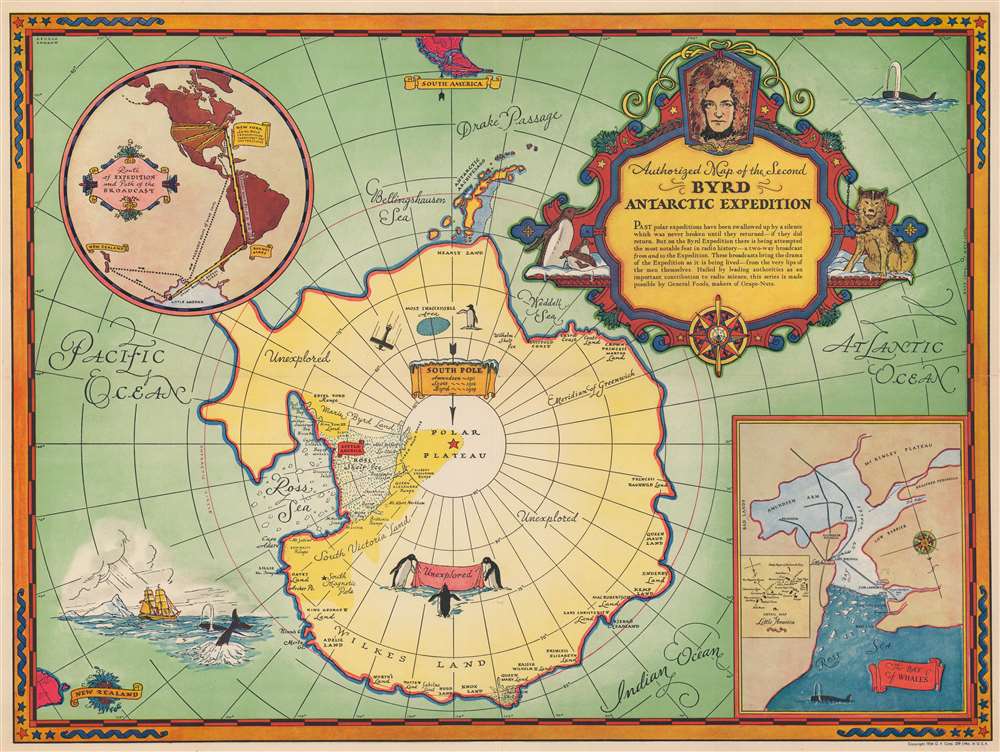 This is a fascinating 1934 George Annand pictorial map of Antarctica celebrating the second Antarctic expedition of Rear Admiral Richard E. Byrd. It beautifully illustrates the South Polar Region, including the southern tip of South America and the eastern tip of New Zealand. Explored regions of Antarctica are identified along the coast, especially near the Ross Sea. Unexplored regions are also labeled. The title cartouche is adorned with a sled dog, a compass rose, penguins, and the portrait of the man himself Richard Evelyn Byrd. A note below the title reads

Past polar expeditions have been swallowed up by a silence which was never broken until they returned--if they did return. But on the Byrd Expedition there is being attempted the most notable feat in radio history--a two-way broadcast of the Expedition as it is being lived--from the very lips of the men themselves. Hailed by leading authorities as an important contribution to radio science, this series is made possible by General Foods, makers of Grape-Nuts'.

Two insets, situated in the top left and bottom right quadrants respectively, detail the 'Route of Expedition and Path of the Broadcast', and 'The Bay of Whales'. A detail map of Little America (the expedition base camp on Ross Ice Shelf) is included within the inset of the Bay of Whales. Other illustrations of whales, penguins, ships, and airplanes, among other things, appear throughout.

A Short Chronicle of Antarctic Exploration

A banner over the South Pole indicates the previous expeditions of Amundsen in 1911, Scott in 1912 and Byrd's first expedition in 1929. The second Byrd expedition took place in 1934, and it was during this second expedition that Byrd spent five cold months alone at Advance Base and almost died. He would later describe his ordeal in his autobiography Alone.

This map was created by George Annand published by the General Foods Corporation as a promotional map celebrating Byrd's second Antarctic expedition and the groundbreaking radio broadcasts along the way. This piece is well represented in institutional collections.