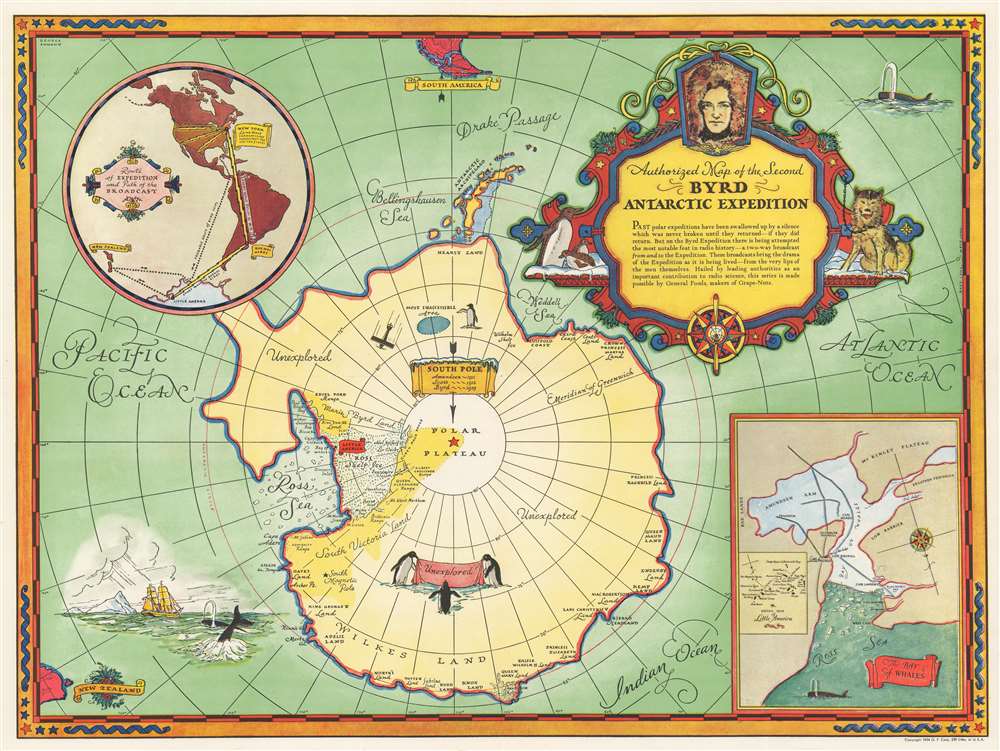 A pictorial map promoting Richard Byrd's second expedition to the Antarctic and the radio broadcasts he made along the way.

This is a fascinating 1934 George Annand pictorial map of Antarctica celebrating the second Antarctic expedition of Rear Admiral Richard E. Byrd. It beautifully illustrates the South Polar Region, including the southern tip of South America and the eastern tip of New Zealand. Explored regions of Antarctica are identified along the coast, especially near the Ross Sea. Unexplored regions are also labeled. The title cartouche is adorned with a sled dog, a compass rose, penguins, and the portrait of the man himself Richard Evelyn Byrd. A note below the title reads, 'Past polar expeditions have been swallowed up by a silence which was never broken until they returned--if they did return. But on the Byrd Expedition there is being attempted the most notable feat in radio history--a two-way broadcast of the Expedition as it is being lived--from the very lips of the men themselves. Hailed by leading authorities as an important contribution to radio science, this series is made possible by General Foods, makers of Grape-Nuts'. Two insets, on the top left and bottom right quadrants respectively, detail the 'Route of Expedition and Path of the Broadcast', and 'The Bay of Whales'. A detail map of Little America (the expedition base camp on Ross Ice Shelf) is included within the inset of the Bay of Whales. Other illustrations of whales, penguins, ships, and airplanes, among other things, are included throughout.

A banner over the South Pole indicates the previous expeditions of Amundsen in 1911, Scott in 1912 and Byrd's first expedition in 1929. The second Byrd expedition took place in 1934, and it was during this second expedition that Byrd spent five cold months alone at Advance Base and almost died. He would later describe his ordeal in his autobiography Alone.

This map was created by George Annand published by the General Foods Corporation as a promotional map intending to celebrate the Byrd's second Antarctic expedition and the groundbreaking radio broadcasts along the way.

George Annand (June 9, 1890 - September, 1980) was an American graphic artist and cartographer active in New York during the middle part of the 20th century. Annand was born in Croswell, Michigan, the sun of a Scottish immigrant doctor who immigrated to the United States via Canada. He received his early education at a one-room schoolhouse in Croswell before he and his parents relocated to Detroit. It was in Detroit that Annand was first introduced to the arts, enrolling in Art School. Later, as a young man, Annand move to New York City, where he continued his artistic studies at the Art Students League. In 1920 he married a childhood friend, Elizabeth Sinclair, who had been widowed during World War I. He adopted Elizabeth's two children and she and Annand shortly thereafter became pregnant with a third child. With a family to support and another 'bun in the oven' Annand turned to the booming New York advertising industry, taking work with the National Biscuit Company (NABISCO). He did well at NABISCO painting, as he liked to joke 'Fig Newtons in their native habitat.' He also took freelance work designing illustrated book covers. One of his first such jobs was illustrating a cover for C. E. Montague's Right off the Map. Naturally, given the nature of the work, the cover featured a map incorporating pictorial elements with aspects of baroque era cartography - Annand's first pictorial map. The Wall Street Crash of 1929 hit Annand's interests hard and he lost his job a Nabisco. Refusing WPA work for reasons of personal pride, Annand managed to get by on odd illustration contracts for various companies including publishers like Doubleday, Doran, and Charles Scribner, as well as pictorial map work for the Waldorf Astoria Hotel, General Foods, Sinclair Oil, and more. His cartographic work eventually drew the attention of the Chicago based map publishing giant Rand McNally, who commissioned him to produce two of their popular 'Romance Maps.' During and after World War II business began to pick up again and Annand produced a huge corpus of pictorial maps. His style combined decorative elements from 16th century Dutch decorative cartography, fine calligraphy, and more contemporary pictorial work. He wanted his maps are noteworthy for their clarity and the sense of space they convey. Annand was, according to Stephen Horsby in Picturing America: The Golden Age of Pictorial Maps, 'a cartographer's cartographer.' Annand continued to produce pictorial maps until forced to sop due to cataract surgery in 1970. He died 10 years later in 1980, at 90 years old.