1786 Bonne Map of the Florida, the West Indies, and the Gulf of Mexico 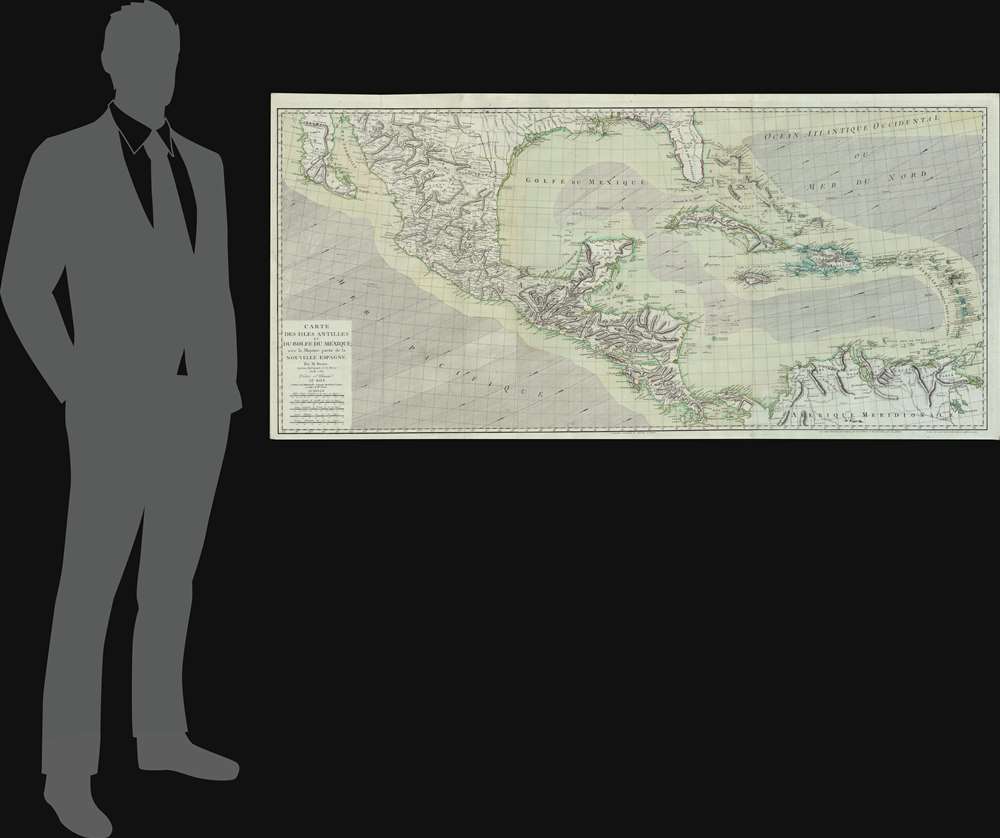 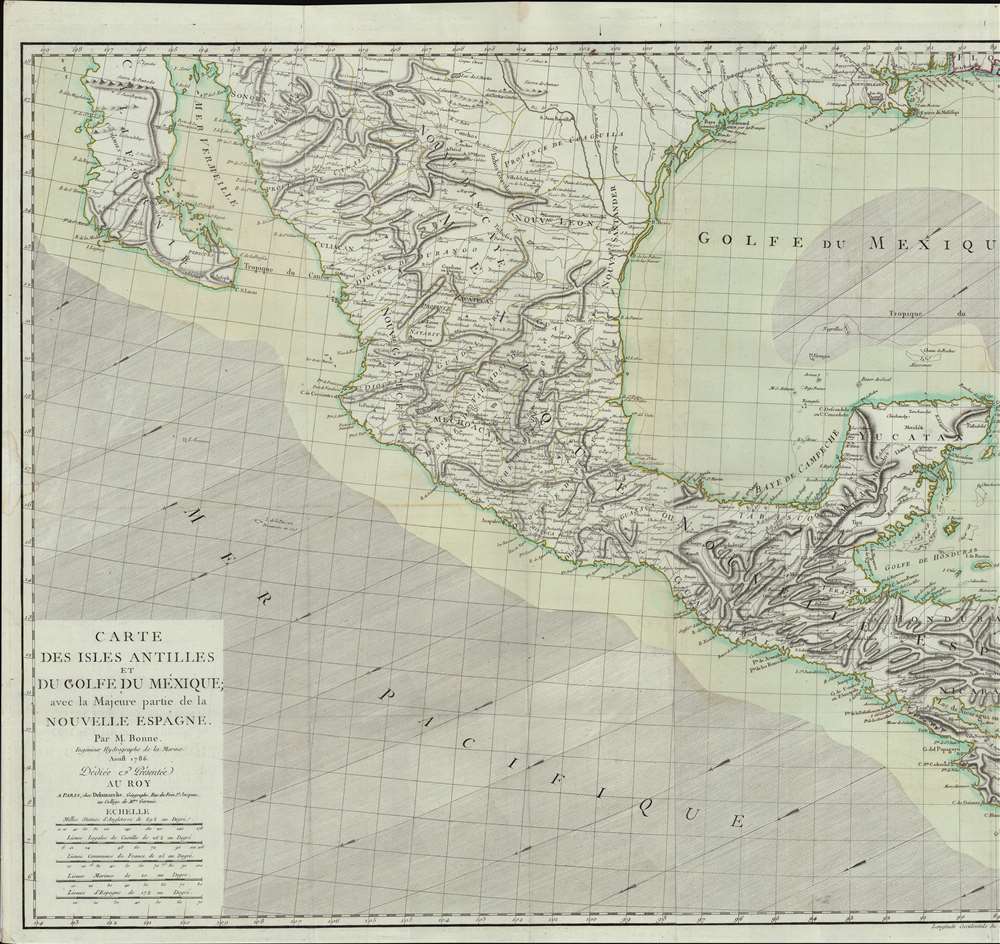 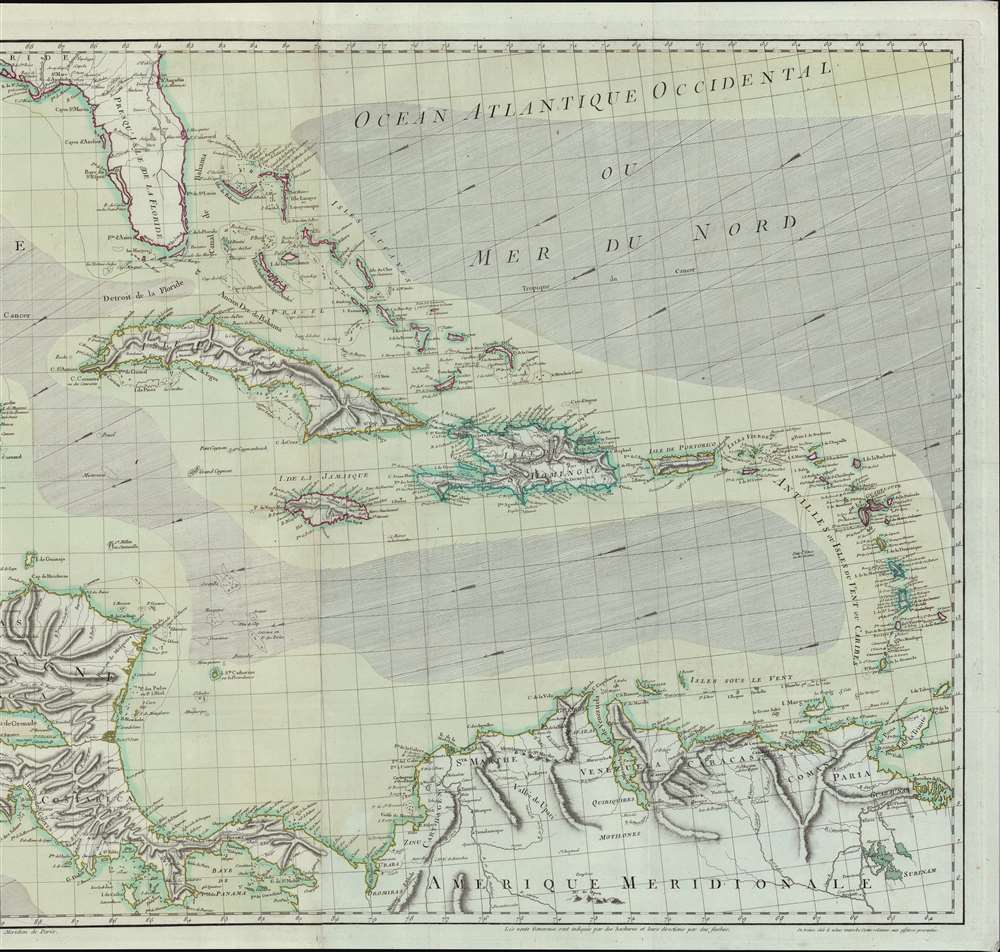 1786 Bonne Map of the Florida, the West Indies, and the Gulf of Mexico

A spectacular large-scale 1786 Rigobert Bonne map of Florida, the West Indies, the Gulf of Mexico, and the Caribbean. This finely engraved and enormous map represents the best and most detailed general map of the West Indies to appear during and shortly after the American Revolutionary War (1775 - 1783). Coverage extends from Baja California and the Pacific to Barbados, and from northern Florida to the Gulf of Panama, including all of Central America, Mexico, parts of the Spanish Main, and the Greater and Lesser Antilles. The map includes a finely engraved illustration of the prevailing winds - important information for regional maritime commerce. Tiny anchors mark safe anchorages. Colonial claims are color coded, with the British represented in red, The Spanish in yellow, and the French in blue.

Some inland detail is included, particularly in Mexico and the Greater Antilles, where inland provinces, cities, river systems, and topography receive a full treatment. Even Florida - at a time when the interior was mostly unknown, has some interesting inland content, with the Native American villages of Suglia, Dest, Cacena, Mayaco, and Yameses, among others, noted.

The map is printed on fine laid paper with a distinctly blue tint. Blue paper appear in Europe as early as the 15th century, but rose exponentially in popularity in the second half of the 18th century. At the time, paper mills collected used rags, which were then broken down into fibers and processed into paper - hence the term 'rag paper'. Blue dies were popular in the European fine-textile industry - particularly among the elite who used blue fabrics for table linens, bed linens, and clothing. Blue dies were less fugitive than other colors, and so were preserved through the paper making pulpification process. Papermakers began experimenting with adding small amounts of blue pulp to bleached white pulps, to even out color and tone - often leading to fine papers with a striking bluish cast - as here. During the French Revolution (1789 - 1799), the linen closets of the nobility were raided with many of the fine textiles finding their way into paper mills. This led to a surplus of blue scrap cloth and consequently, blue paper. Most printing on blued paper dates to this period. Nonetheless, by the end of the 18h century, the fashion for blue paper declined considerably in favor of more traditional white. Today, maps produced from French Revolution blue paper are highly desirable.

This map was drawn by Rigobert Bonne and first published by Jean Lattré in 1780. A second issue by Lattré appeared in 1782. Subsequently, the plate passed to Charles-François Delamarche, who issued the present 1786 edition. The map is quite scarce. The OCLC notes examples at 7 institutions, including Harvard, the Library of Congress, and Getty Research Library. Of this specific edition, we note only a single example, at the Library of Congress.