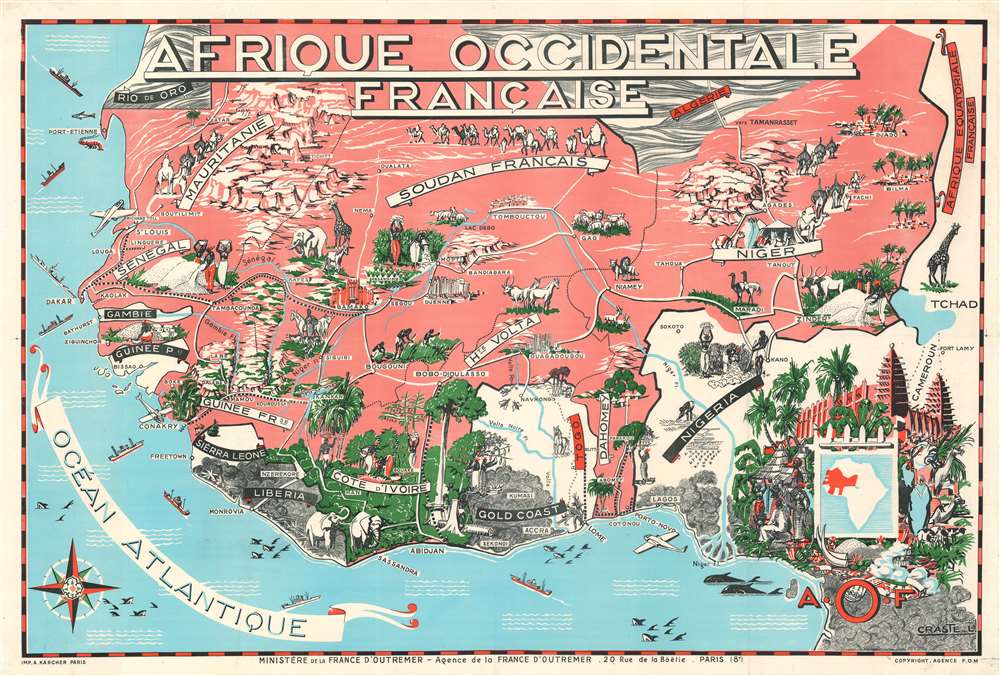 This is a 1951 Léon Craste pictorial map of French West Africa. The map depicts the region from the Atlantic Ocean to Chad and Cameroon in French Equatorial Africa and from Algeria to the Atlantic Ocean. French West Africa is shaded a dark salmon color and includes the colonies of Mauritania, French Sudan, Senegal, the Ivory Coast, French Guinea, Dahomey, Upper Volta, and Niger. Not only are the French colonies in West Africa identified, but so are Portuguese Guinea (modern-day Guinea-Bissau), Gambia (then a British colony and protectorate, today the independent nation of The Gambia), the Gold Coast (then a British colony, today the independent nation of Ghana), Togo, Liberia, Sierra Leone, and Nigeria. Cities throughout the region are identified, including Ouagadougou (the capital of Burkina Faso) and Timbuktu, both of which are marked by city views. Accra, Lagos, Abidjan, Freetown, Monrovia, Dakar, Bamako, and Djenne are also labeled. Both the Senegal River and Niger River are illustrated. Craste evokes the contrast in landscapes between the upper portion of the map, home to nomads, camel trains, and oases, with the lower portion, where lush jungles abound. Animals, both domestic and wild, are drawn, with lions, giraffes, and elephants appearing. Ships ply the waters of the Atlantic among whales and sharks. An inset map in the lower right quadrant, set among stereotypical and racist imagery of an African village, situates French West Africa on the continent.

This map was created by Leon Craste, printed by the Imprimerie Alfred Karcher, and published by the French Ministry of Overseas France in 1951. No examples are recorded in the OCLC and it appears on the private market from time to time.

Leon Craste (1887 - 1970) was a French artist. Craste is largely remembered for his pictorial travel maps of French West Africa.


The Imprimerie Alfred Karcher (1911 - 1999) was a French publishing firm founded by two Alsatian brothers,Jules and Alfred Karcher, in the 10th arrondissement of Paris.