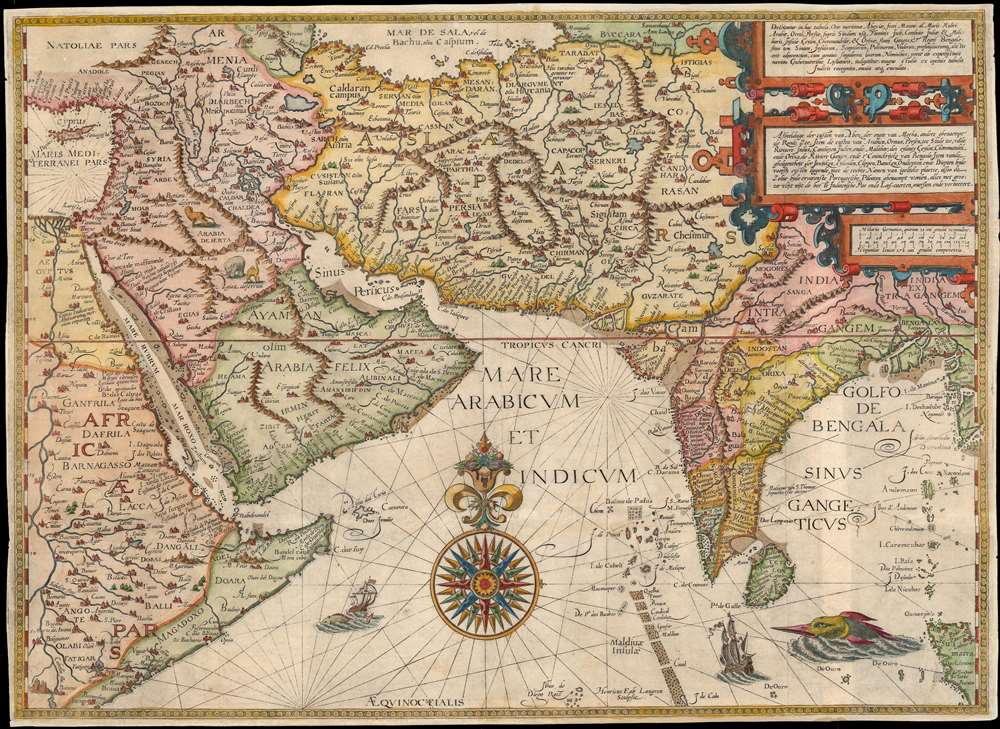 This is Jan van Linschoten's seminal 1596 map of the lands abutting the Indian Ocean, with coverage extending from the Arabian Peninsula to Sumatra. This map represents a significant advancement in accuracy and detail over any prior printed map of the region, setting the standard for most subsequent maps of the near east and south Asia for the remainder of the 16th and throughout the 17th century. Moreover, it exposed preciously guarded secrets of Portuguese maritime geography, paving the way for the Dutch seizure of the East India trade, thus spurring the Dutch Golden Age.

With respect to its treatment of Arabia, map historian G. R. Tibbets commented:

The surprising fact about the representation of the (Arabian) peninsula is the close resemblance of the outline to that of a modern map when compared with other engraved maps of the time.

Linschoten, between 1583 and 1589 a secretary to the Archbishop of Goa, was in a unique position to collect information pertinent to the Portuguese empire, which upon his return to the Netherlands he promptly published. His Itinerario's description of the lands of the East, and the different peoples his employers encountered, their costumes, religions and customs, represented the bulk of his work. However, his copying of Portuguese sea charts, sailing instructions, and guides from port to port represented a thunderbolt for the Dutch, who would swiftly take advantage of the new information to seize control of the lucrative spice trade. Linschoten's book is scarcely rivaled in its historical impact: without Itinerario, the Dutch would have been far less able to break the Portuguese monopoly on the East Indian trade, and the Dutch Golden Age would likely not have occurred.

A Most Beautiful Engraving

Linschoten's engraver belonged to the van Langren dynasty of Antwerp/ Amsterdam engravers, whose expert work captured the unique beauty of the portolan charts upon which they were modeled. The map's central compass rose especially captures the style of the map's sources.

This map was engraved by Hendrick van Langren for inclusion in Linschoten's 1596 Itinerario, and it was retained in later editions of that work. No changes in state have been recorded. We see eleven examples of the separate map listed in OCLC, with the full work somewhat better represented in institutional collections.

Jan Huyghen van Linschoten (1563 - February 8, 1611) was a Dutch merchant, cartographer, and historian active in the late 16th century. He was born in Haarlem, the son of a public notary but moved to Enkhuizen shortly thereafter. In 1576, at 14, Linschouten relocated to Spain, to apprentice as a merchant under this older brother, Willem van Linschouten, then active in Seville. He remained until 1580, when he took work in Lisbon, Portugal, under another merchant. He was in this position only briefly before Willem introduced him to the Archbishop of Portuguese Goa, Dominican Vicente da Fonseca, to whom he was appointed secretary. Accompanying Vicente da Fonseca, Linschoten arrived in Goa in September of 1583. He remained under Vicente da Fonseca for the next four years, often traveling with the Archbishop to far of locations such as China and Japan. During that time, he became fascinated with Asian cultures and their interaction with Europeans. With access at the highest level, he copied numerous maps and other documents, as well as records on sea routes to and from Goa, and trade agreements. When Vicente da Fonseca died in 1587, Jan Huyghen boarded a ship back to Holland, but was waylaid en route by a pirate attack and shipwreck in the Azores, where he remained until 1592. Back in Holland, Jan Huyghen joined the 1594 expedition of Willem Barentsz to the Kara Sea, north of Russia, in search of the fabled Northeast Passage to Asia. The Barentsz expedition was a failure, but Jan Huyghen survived and back in Holland with the support of Cornelius Claesz, he published an account the voyage. He also published a journal of his travels in Asia, in the process revealing a wealth of Portuguese trade secrets which ultimately influenced Dutch and English attempts to take over the East Asia trade. Among these he revealed was the ‘key’ to unlocking the Portuguese grip on passage through the Malacca Strait. He suggested traders approach the East Indies through the Sunda Strait, thereby circumventing Portuguese patrols in Malacca. This passage eventually became the main VOC thoroughfare into Southeast Asia and led to the Dutch colonization of the East Indies. In 1595 he married Reynu Meynertsdr Seymens, also of Enkhuizen. He remained with his family in Linschoten died in Enkhuizen, where he had worked as town treasurer until his death in 1611. Learn More...


Hendrick Florent van Langren (1574 - 1648) was a member of the van Langren dynasty of Dutch engravers, map publishers, and globe makers. Initially settled in Antwerp, the family moved to Amsterdam and would be instrumental in the early map trade. Hendrick and the elder Langren, Jacob, engraved many of the maps of Jan van Linschoten's Itinerario, thus creating the images attending one of the most influential travel works published. Learn More...