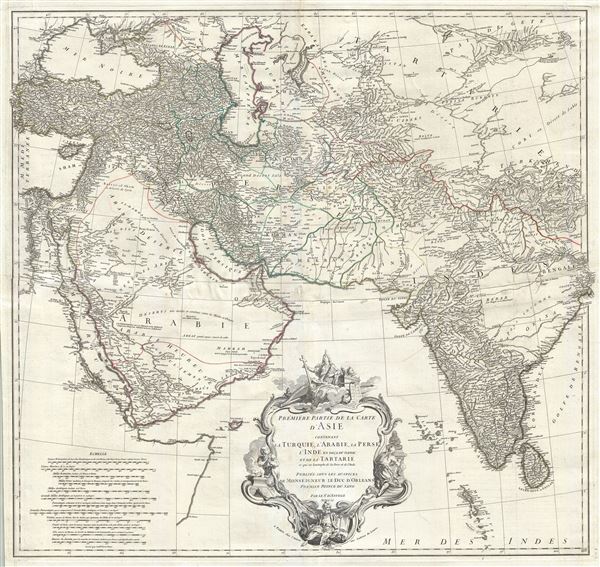 A foundational map of Persia, Arabia, and India.

A monumental and highly detailed 1751 map of India, Persia, and Arabia by the French cartographer Jean Baptiste Bourguignon d'Anville. Centered on Persia, this map covers from Istanbul to eastern India and Tibet, and from the Black Sea to the Maldives. It offers excellent coverage of the central Asian portions of the Silk Route naming the centers of Samarkand, Bukhara, Lop Nor, and others. At the bottom center there is a large decorative title cartouche including stylized Christian, Muslim Zoroastrian, and Buddhist elements.

Persia at this time was itself experiencing the waning years of the short lived Zand Dyansty who ruled from the capital city of Isfahan - identified here. Within 50 years of this maps issue, in 1794, Aga Muhammad Khan would overthrow Loft Ali Khan, last Shah of the Zand Dynasty, and relocate the capital to the new city of Terhan. The subsequent era, the Qajar Dynasty, witnessed numerous military conflicts with the rising powers of Imperial Russia and the loss of much of Persia's territory.

India meanwhile was quickly falling under the control of the British East India Company who, from a few coastal outposts, were rapidly asserting their authority over most of the subcontinent, leaving only the Sultanate of Mysore, under Tipu Sultan, independent. In 1784, Tipu Sultan negotiated the Treaty of Mangalore following the Second Anglo-Mysore War. Though it only gave Tipu Sultan a short reprieve, the treaty was considered a victory for the people of Mysore. Nonetheless, the Third and Fourth Anglo-Mysore Wars were soon to follow and by 1799 Tipu Sultan had been defeated and all of India fell under the at least nominal control of the British east India Company.

D'Anville prepared this map in 1751. Like most D'Anville maps it was an independent issue and included in various made-to-order atlases on a case-by-case basis. It was engraved for D'Anville by Guillaume Delahaye.