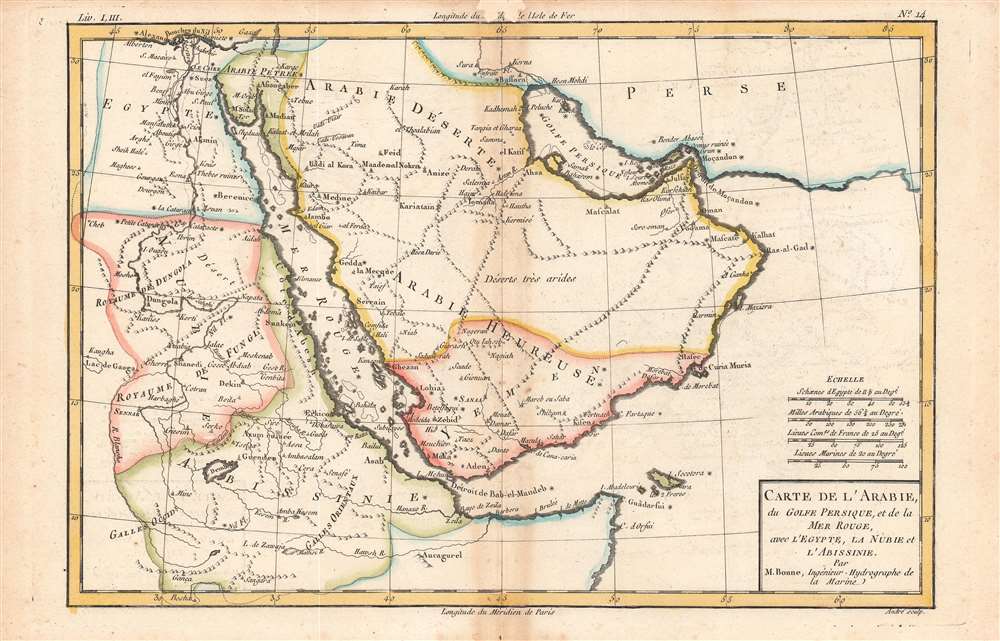 Bonne's beautiful representation of the Arabian Peninsula and environs.
$175.00

This is Rigobert Bonne and Guillaume Raynal's 1780 map of the Arabia and Abyssinia (Ethiopia). It covers from the Nile Delta south as far as the Horn of Africa and west to Persia, fully or partly inclusive of the modern-day countries of Ethiopia, Egypt, Sudan, Eritrea, Djibouti, Somalia, Saudi Arabia, Yemen, Oman, Kuwait, and the United Arab Emirates.

This map offers surprising detail considering that this part of the world was largely unknown to Europeans at the time. Towns, rivers, some topographical features, ports, and political boundaries are identified, while dangerous reefs and other undersea hazards that historically hindered trade in the Red Sea and the Persian Gulf are tentatively ghosted in.

Some of the nomenclature used here requires explanation. The kingdoms of Dungola and Fungl in Nubia refer to Dongola, an ancient religious and commercial center, and the Funj Sultanate or the Sultanate of Sennar, respectively. The Sultanate of Sennar had been the dominant power in Nubia since the 16th century but had declined in power by the time this map was made. In the 19th century, these areas were conquered first by Muhammed Ali Pasha, then by the British. Arabie Pétree, Arabie Déserte, and Arabie Heureuse refer to the Romans' division of the Arabian Peninsula, the first of which was a province of the empire from the 2nd century CE.