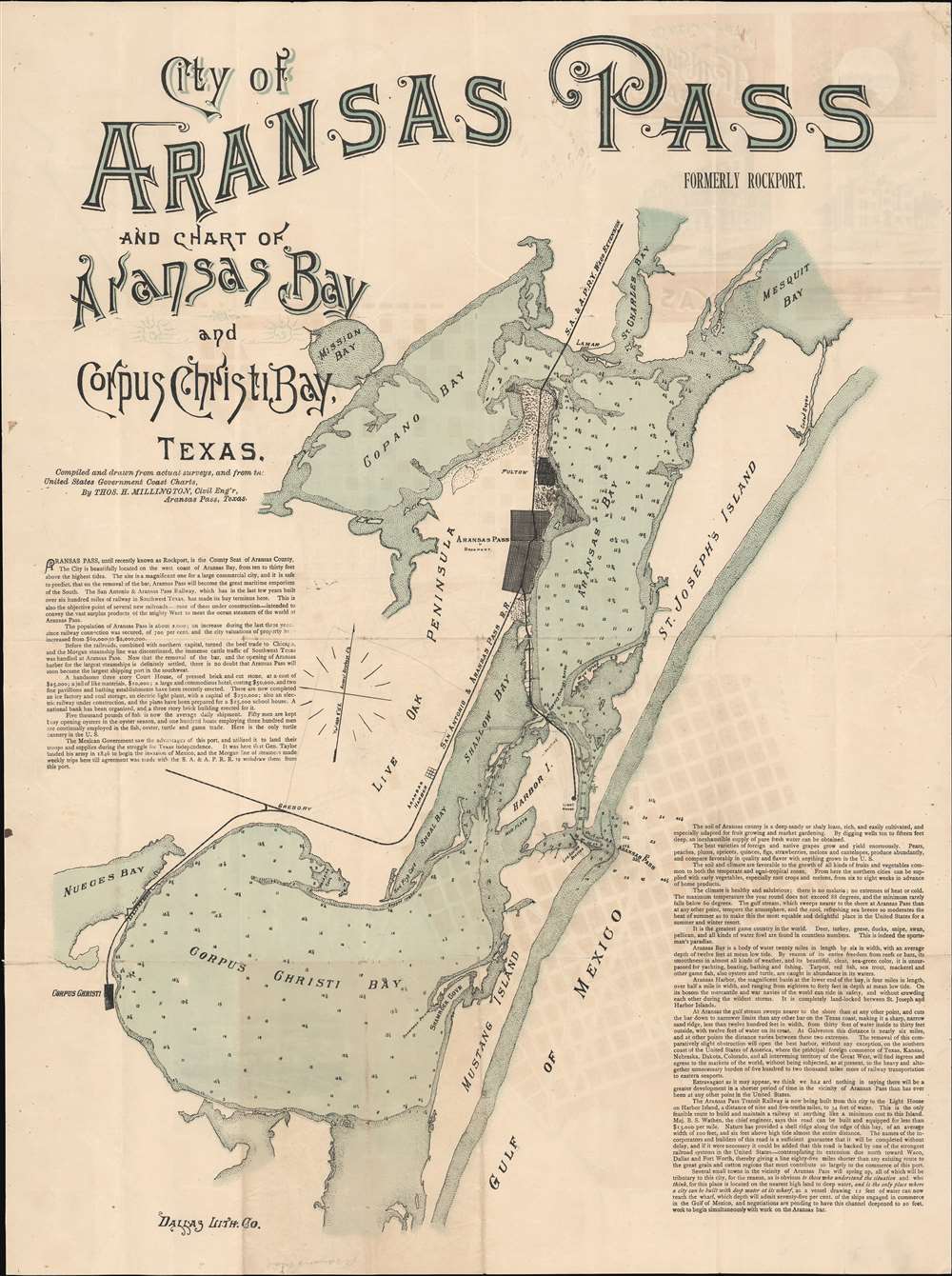 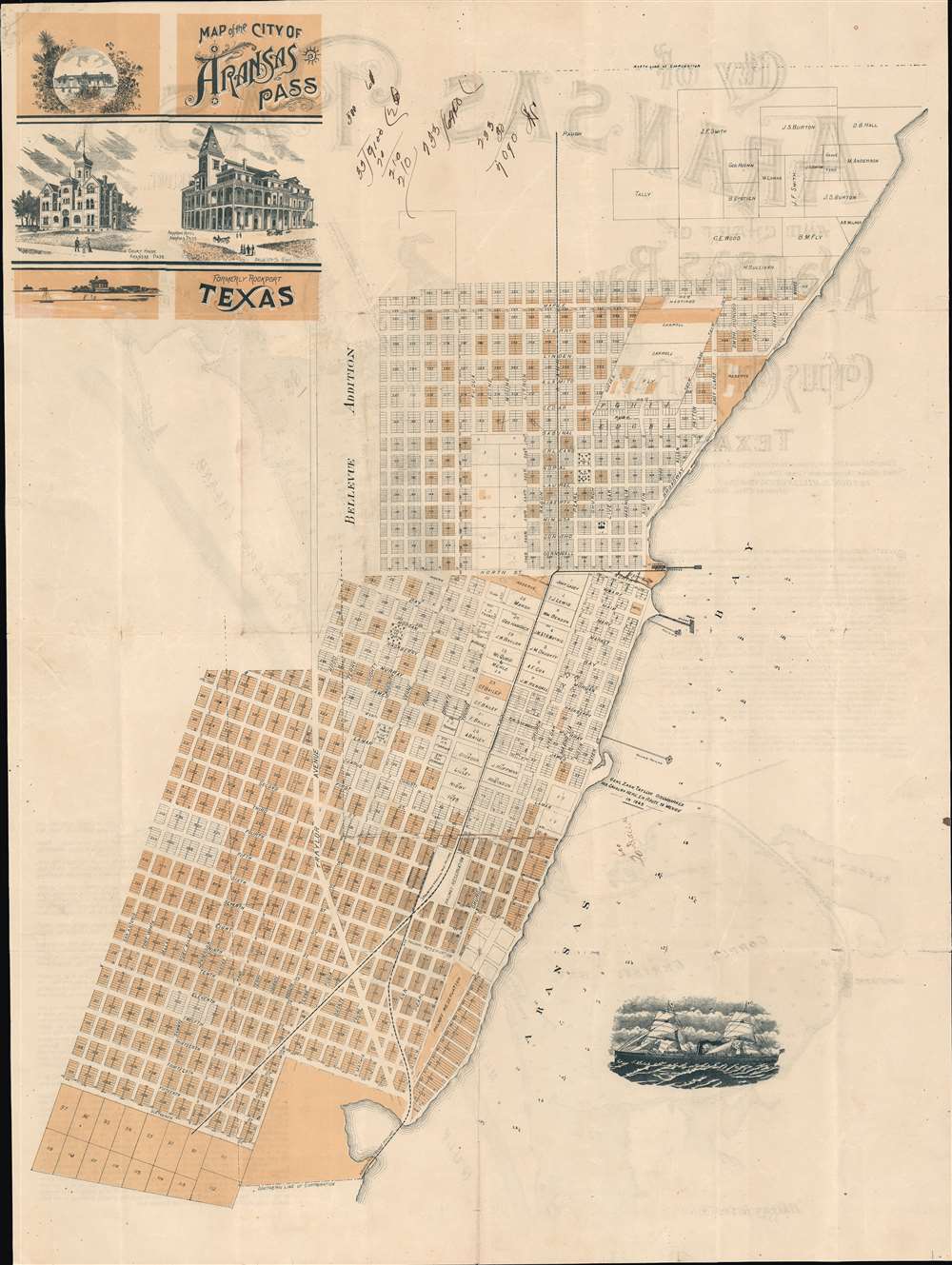 This is a large and impressive c. 1890-91 Thomas Millington real-estate broadside highlighting Rockport, Texas and the San Antonio and Aransas Pass Railway (SAAP) attempts to rebrand Rockport as Aransas Pass. The SAAP, whose hub was located there, planned for Rockport to become the largest deep water port on the Gulf Coast, and thus a major shipping and tourism hub. The map was issued in the last days of the SAAP's independence - before the railroad ran into insolvency was taken over by the competing Southern Pacific and sidelined.

Aransas Pass Praised on the Map

The site is a magnificent one for a large commercial city, and it is safe to predict, that on the removal of the [sand] bar, Aransas Pass will become the great maritime emporium of the South. The San Antonio and Aransas Pass Railway, which has in the last few years built over six hundred miles of railway in Southwest Texas, has made its bay terminus here. This is also the objective point of several new railroads -- some of them under construction -- intended to convey the vast surplus products of the mighty West to meet the ocean steamers of the world at Aransas Pass

Rockport was founded in 1867 as a cattle-slaughtering and packing town. The sheltered port was set up as a wharf for the Morgan Steamship line - which specialized in shipping packaged meat products. For a time, the town prospered until the meatpacking industry collapsed with the Panic of 1873. At the time, there were an assortment of plans for developing a major deep-water port in the area and Aransas Bay / Rockport were serious contenders. With that in mind, in 1888, the San Antonio and Aransas Pass Railway developed a line connecting San Antonio with Corpus Christi and Waco via a central hub at Rockport. With the railroad, tourists began to discover the attractive bay and sea breezes. Eager to shed Rockport's reputation as a dirty cattle town, the San Antonio and Aransas Pass Railway began a propaganda campaign to rename Rockport 'Aransas Pass'. They also encouraged the construction of resort hotels to accommodate tourists. Attempts to turn Rockport into 'Aransas Pass' were ultimately derailed when a major train wreck forced the SAAP into insolvency. Then, in 1919, a major hurricane devastated the entire region. Around this time, Rockport developed a lucrative shrimping industry, but dreams of it becoming the 'great maritime emporium of the South' ended. The true Aransas Pass, further south, is noted on the map and remains the current site of the city of that name.

The San Antonio and Aransas Pass Railway (SAAP) was founded by Uriah Lott (1842 - 1915) to connect San Antonio with Aransas Bay on the Texas Gulf Coast, where a deep water port was in development. Lott had passion, but no funds for the railroad, and its early days were defined by his scrappy can-do approach, as described in a 1901 article in the St. Louise Globe Democrat,

South Texas is full of strange things. From South Texas came a man who built 600 miles of railroad with a five-dollar bill and faith, and the bill was a borrowed one. He moved to San Antonio from Corpus Christi with his possessions heaped on a two-wheel cart. He got a charter to build the railroad from San Antonio to Aransas Pass. He graded a mile of it, throwing a great deal more than one shovel full of dirt with his own hands. The receiver of another railroad loaned this indefatigable builder enough old rails for a mile of track. In a distant part of the State was purchased an engine which had been condemned six years before and sent to the shop to be wrecked for scrap iron. Two old cars were picked up somewhere at a bargain, and that old engine, drawing these old cars steamed into San Antonio. On this engine and cars, in bold lettering, was printed in lamp black 'S.A. and A.P.' With one mile of old rail track and with the equipment of the old engine and the two old cars, Uriah Lott started the Aransas Pass System.

Lott was a dogged promoter and with additional financing from businessmen in San Antonio, construction began in earnest in 1885 and the first trains rolled out a year later in 1886. The railroad operated some 688 miles of track and provided South Texas with a new outlet to the Gulf of Mexico and international trade. By the fall of 1887 the SAAP had completed the 71-mile branch line to Kerrville. Nine months later a branch line from Corpus Christi to Rockport was completed. By early 1889 the SAAP completed the line to Houston followed immediately by a line into Waco. A horrific train wreck in 1890, high cost of track maintenance, and rapid expansion forced the SAAP into insolvency and by 1890, unable to pay its investors, it went into receivership. In 1892, it was sold to the Southern Pacific. It continued to operate under the SAAP brand but with SP management until 1925.

This map was drawn by Thomas H. Millington and likely published by the San Antonio and Aransas Pass Railway. It was printed in Dallas, Texas, by the Dallas Lithographing Company. The map is not dated, but we can infer the date with considerable accuracy based upon the content. It notes that the Aransas Pass Transit Rail to Harbor Island is under construction - this railroad was chartered in 1890 and constructed in 1890 -1891. It also mentions that the map was made three years after the 1888 arrival of the SAAP in Rockport. We thus feel confident dating it to 1890 - 1891. This is the only known example.

Thomas H. Millington (1819 - 1888) was an English-American civil and railroad engineer active in South Texas in the late 19th century. Millington was born in Prees, Shropshire, England. While it is not clear when he emigrated to the United States, he is recorded as a railroad engineer with the Nashville and Northwestern Railroad in 1856. He served the Confederate cause in the American Civil War, attaining the rank of colonel in charge of fortifications under General Pierre Gustave Toutant-Beauregard (1818 - 1893). After the war, he became chief engineer of the Memphis and Knoxville Railroad. Working with various railroad lines, Millington played a significant role in planning numerous railroad towns in the American southwest. Millington Tennessee is named after him. He was also briefly chief civil engineer for San Antonio, Texas. Four of his sons, George H Millington (1848 - 1931), Charles Alfred Millington (1850 - 1923), Joseph Millington (1852 - ????), and Frederick Alfred Millington (1853 - 1939) were also civil engineers. Learn More...


Dallas Lithograph Company (1883 - 1901) was a commercial lithography and chromolithography firm active in Dallas, Texas in the late 19th century. When founded in 1883 or 1884, it was the first lithographic press in Dallas. The founders were Isaac Monteaux, J. Booker, Nate Starke, and Thomas L Townsend (1851 - 19??). The company incorporated in 1885. They were early adaptors to the Steam Lithographic Press, capable of issuing large-scale lithographs in color and quantity. In 1890 they build an impressive three-story building at 176 Elm Street. In 1901 the firm was acquired by the Exline Printing Company. Learn More...

Good. Some wear on old fold lines with very minor loss at centerfold intersection. Even overall toning. Some pen marks.