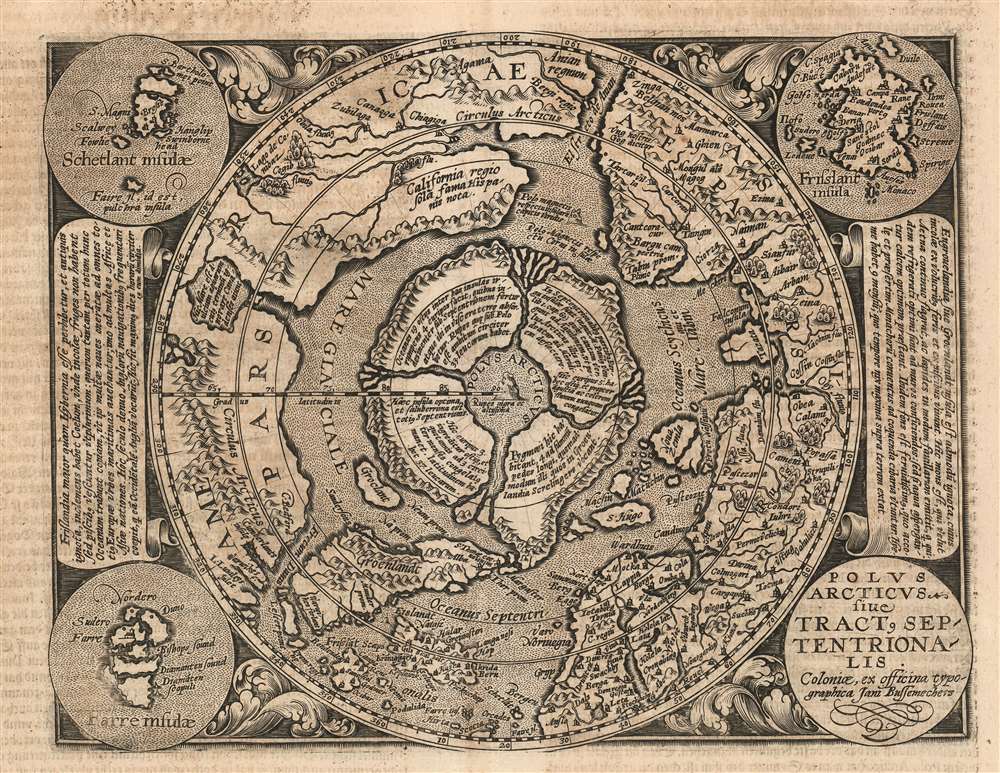 This is a scarce 1600 Matthias Quad map of the Arctic, a beautifully engraved reduction of Gerard Mercator's seminal 1595 Septentrionalium Terrarum descriptio. The timing of the engraving is of great importance: Quad's model was not the relatively ubiquitous 1606 edited version of Mercator's map, but the extremely rare 1595 first state. Although the smaller size of Quad's copperplate necessitated the excision of some place names in Greenland, Norway and Russia, the central Arctic details of the map are very faithfully preserved from the Mercator original - thus making a virtually unobtainable map's cartography available to the more casual collector. Despite the flaws of many of Mercator's sources, his map (and Quad's faithful rendition of it here) presents a fascinating portrait of the best 16th century European conceptualization of the north parts of the world.

Gerard Mercator's famous projection was a superb means of depicting regions near the equator and in temperate zones, but at the expense of grossly distorting regions close to the poles. Consequently, Mercator compensated by producing the polar projection map - first as an inset to his famous wall map, and later as the single sheet included in his 1595 Atlas which provided Quad his model.

The Northern Edge of European Experience

In depicting regions so remote to European experience, Mercator had few sources upon which to draw, resulting in some of the astonishing geographical information revealed here. Mercator had derived his map's distinctive Arctic islands, its rushing rivers and maelstroms, and the North Pole's Rupes Nigra from medieval accounts of legendary Arthurian explorations, combined with the reports of 14th century Norse travelers. The mythical island of Frisland is drawn from the Zeno Map, composed in 1558 by Nicolò Zeno the Younger based on the alleged 14th century exploration of his ancestors Nicolo and Antonio Zeno. Despite the strong likelihood that the Zeno brothers never voyaged at all, Nicolò Zeno the Younger's map remained one of the only efforts to map the remote northern Atlantic available to Mercator. Frisland continued to appear on maps well into the 16th century. Details in Siberia reveal the contributions of some of the earliest western Europeans to describe Muscovy and the lands beyond. In North America, Mercator's 1595 map included details of the northern parts of America not included in his 1569 wall maps, such as the 'Lago de Conibaz' and the Arctic bay it empties into (likely sourced from Cartier, via Thevet. This is therefore one of only a handful of rarities - Mercator's Arctic, the 1575 Thevet America, and the 1593 De Jode North America - to preserve this fascinating geography.

Matthias Quad engraved this map for inclusion in his Geographisch Handtbuch, published in 1600 by Johann Bussemacher in a single edition. We see twenty six examples of the book listed in OCLC; only seven copies of the separate map are so listed. While not as rare as the 1595 first state of its Mercator source, Quad's map is nevertheless an order of magnitude scarcer than the later, Hondius-edited state of Mercator's map.

Matthias Quad (1557 - October 29, 1613) was Dutch engraver active in Cologne during the late 16th and early 17th centuries. Quad was born in the Netherlands and studied engraving under Johannes van Deutecum (fl. 1552 - 1606) of Deventer and Hendrick Goltzius (1558-1616) of Haarlem. Around 1580 he relocated to Heidelberg or Cologne where he primarily engraved geographical texts in conjunction with fellow publisher Johann Bussemacher. In 1608 he published an atlas, Fasciculus Geographicus, with Bussemacher in Cologne. In 1609, another major work, his Teutscher Nation Herligkeit, a historico-cultural regional study of Germany, was published by Wilhelm Lutzenkirchen . Learn More...


Johann Bussemacher (fl. c. 1580 - 1613) was a German publisher, engraver, art dealer, and bookseller active in Cologne in the late 16th and early 17th centuries. He was trained as a copper engraver in Dusseldorf, where he was born. Around in 1583 he established his own imprint and a publishing concern in Cologne. Bussemacher was for a time the largest and most successful publisher in Cologne. He is commonly associated with producing engraved images of saints and noble personages, but he also issued several maps in conjunction with Matthias Quad. Learn More...