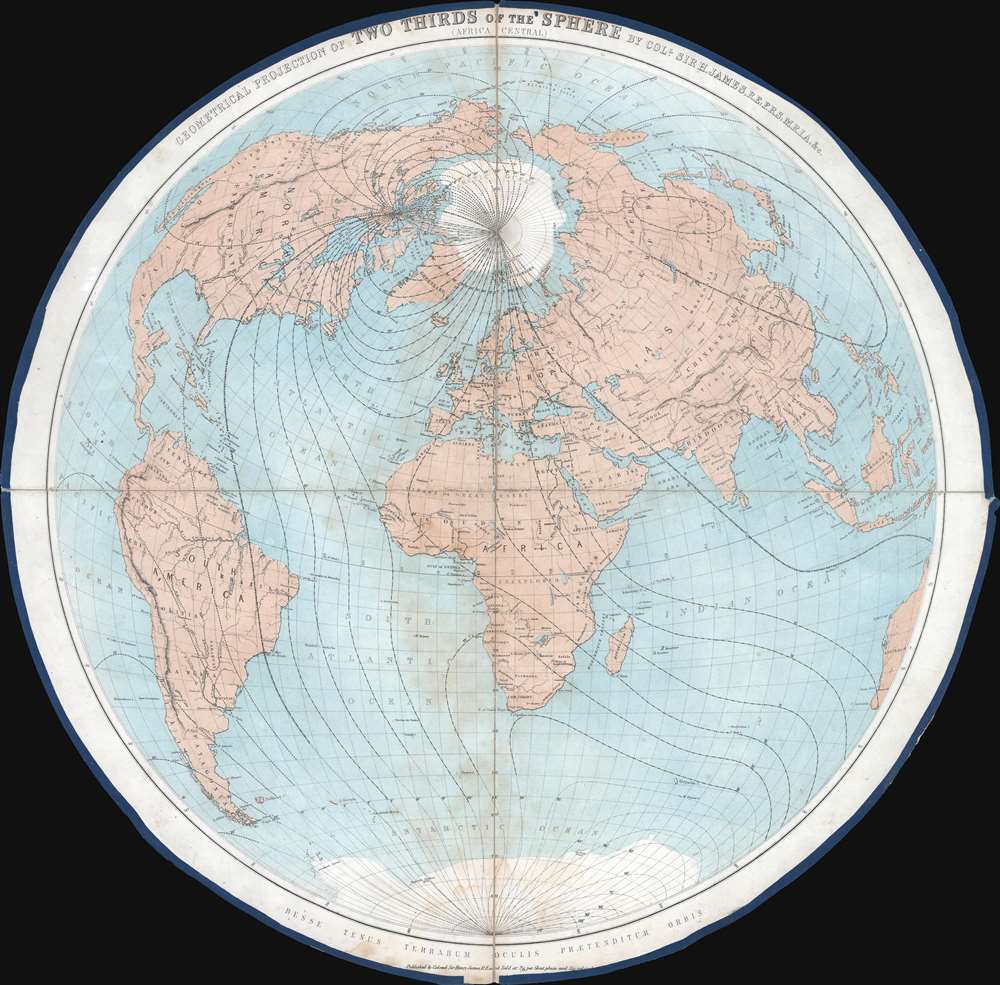 Highlights the 'Terrestrial Hemisphere' on a newly-conceived projection.
$750.00

This is an 1860 Henry James geometrical projection circular map of two-thirds of the world, focusing on the 'terrestrial hemisphere'. Centered on northern Africa, the world appears as if on the inside of a sphere. Dashed lines represent lines of longitude. Some countries, although not all, are labeled. A handful of cities are identified as well, including the major meridian cities: London, Paris, Rome, New York, and Washington, D.C.

In 'Paper XVI. On the Geometrical Projection of Two-thirds of the Sphere', then Lieutenant-Colonel James succinctly explains the inspiration behind the creation of the map, the unusual projection, and its execution.

Sir John Herschel, in his 'Outlines of Astronomy,' says: 'It is possible so to divide the globe into two hemispheres, that one shall contain nearly all the land, and the other being almost entirely sea. It is a fact, not a little interesting to Englishmen, and, combined with our insular station in that great highway of nations, the Atlantic, not a little explanatory of our commercial eminence, that London (or more exactly Falmouth) occupies nearly the centre of the terrestrial hemisphere.'

In verifying this interesting fact on a globe, it occurred to me to enquire what would be the central point of the projection which should embrace all the land in Europe, Asia, Africa, and America, and I found that this point would be in latitude 23° 30' north, that is, on the northern tropic, and in longitude 15° east of Greenwich. This point is about 650 miles south of Tripoli, near a place called May Yan, in Africa.

But to make a projection of the sphere which should embrace so large a portion of the surface, I found that it would be necessary to make it as if we were looking into a hollow sphere, and seeing the continents as if they were on the internal surface. Then by taking the point of projection in the prolongation of the axis of the great circle whose pole was in the central position, and at the distance of half the radius from the surface of the sphere, I found that I could project on the plane of the circle drawn parallel to the above great circle, and at 23° 30' from it towards the point of projection, exactly seven-tenths, or rather more than two-thirds of the surface of the sphere.

This projection, which is strictly geometrical, has the great advantage of giving a good perspective representation of the surface, and it represents the different parts of the globe with little distortion, more especially in the central and circumpolar regions. I have used this same projection for representing the Pacific Ocean and the South Polar Regions by simply turning it upside down.

It is especially well suited for the representation of all such scientific facts as require to be exhibited on a large portion of the surface of the globe for properly comprehending them, such for example as the isothermal and isobarometrical lines, the lines of equal magnetic declination or the geological structure of different parts of the globe, the currents of the ocean, etc. It is more especially suited for maps of the stars, to which purpose, and for the representation of the lines of equal magnetic declination, I am now applying it.

This map was created and published by Henry James in 1860. Three cataloged examples appear in OCLC and are part of the collections at the National Library of Scotland, the University of Manchester, and the British Library.

Sir Henry James (1803 - 1877) was the director-general of the Ordnance Survey, the mapping agency of the British government, from 1854 to 1875. He studied at the Royal Military Academy and was commissioned as a second lieutenant in the Royal Engineers on September 22, 1826. He joined the Ordnance Survey in 1827 and spent the majority of his career there, except for a brief stint at the Admiralty. He became Superintendent of the Ordnance Survey in 1854. Upon taking over the Ordnance Survey, he became involved in the 'battle of the scales'. It had long been debated which maps should be made and what scale would be the most useful. Sir Henry was a firm believer in the 1 : 2500 scale, and, due to his position, imposed this belief upon the Survey despite the less than full approval of his superiors. Sir Henry created a photography department at the Ordnance Survey in 1855 as a means of reducing the scale of maps. He claimed to have invented photozincography, a photographic method of producing printing plates. However, the process had in fact been developed by two members of his staff. Nonetheless, James was the driving force behind using the process to create and publish a facsimile of the Domesday Book in the 1860s. He also used this photozincographic process to preserve historic manuscripts. Learn More...

Good. Dissected and mounted on linen in four sections. Exhibits wear along original linen fold lines including slight loss to linen at edges and at center fold intersection. Silk edging loose in places.

James, H., 'On the Geometrical Projection of Two-Thirds of the Sphere' Papers on Subjects Connected with the Duties of the Corps of Royal Engineers, New Series, Vol. VII. (Woolwich: Jackson) 1858. OCLC 316425800.
Looking for a high-resolution scan of this?