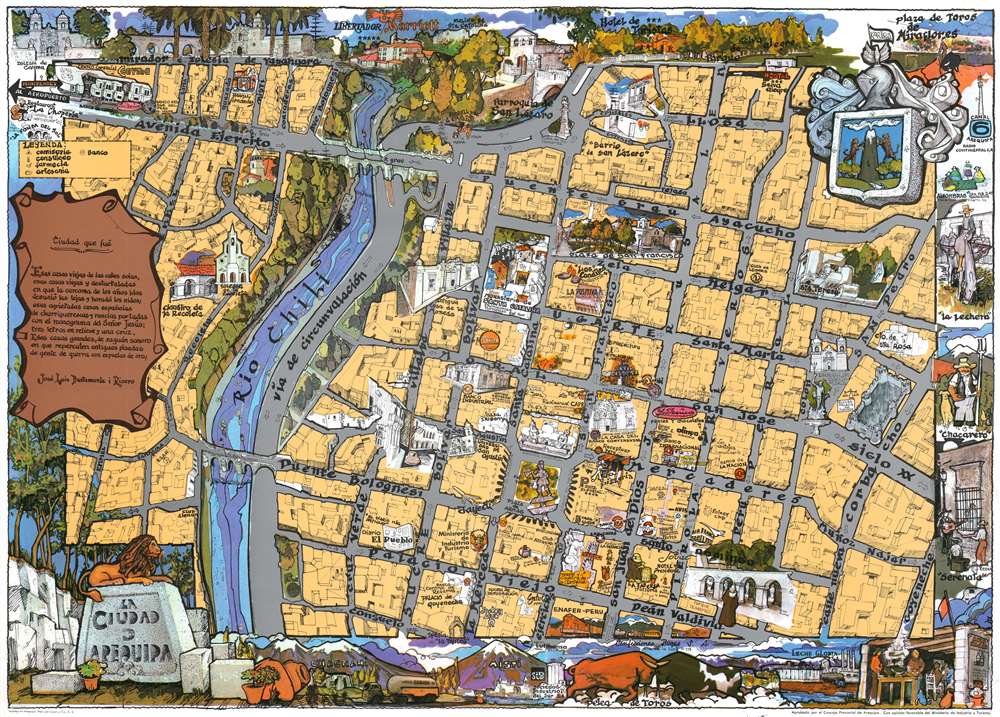 This is a c. 1975 pictorial tourist map of Arequipa, one of Peru's most beautiful and historic cities. Pictorial vignettes highlight important buildings throughout central Arequipa, including the cathedral, the Plaza de San Francisco, the Banco Central de Reserva (Central Reserve Bank), and the Parque Duhamel. Hotels, banks, restaurants, and other businesses are identified as well. Numerous airline offices, including Aire France, Aerolineas Argentinas, and Lufthansa are also labeled. A stunning pictorial border encircles the map on three sides highlighting the Andes, bullfighting, and hotels.

Arequipa was founded on August 15, 1540, and formally named by Spanish king Carlos on September 22, 1541. Arequipa held an outstanding economic position during the viceregal period. During the Republican Era, Arequipa has seen civic, popular, and democratic rebellions. Today, Arequipa is the second most populous city in Peru and the seat of the Constitutional Court, for which it is known as the 'legal capital of Peru'. Its historical center, some of which is illustrated here, has been declared a UNESCO World Heritage Site.

This map was approved by the Concejo Provincial de Arequipa (Arequipa Provincial Council) with input from the Ministerio de Industria y Turismo (Ministry of Industry and Tourism). It was printed in Arequipo by Cuzzi y Cia. c. 1975. An example bearing the same title is cataloged in OCLC as part of the collection at the University of Amsterdam.

Juan Antonio Cuzzi Morales (19xx - XXXX) was a Peruvian printer and publisher. He founded Cuzzi y Cía., S.A., as a small printing house in 1951 in Arequipa, Peru. Since the beginning, Cuzzi has set itself apart by the high quality of its printing and its excellent service. Mario Álvaro Cuzzi Cuadros (19xx - XXXX), the founder's son, updated the firm's technology and elevated its already lofty reputation for high quality products. The press soon became the most important printing press in Arequipa and eventually became known in Lima, the capital of Peru. In 1979, Cuzzi began printing and binding luxury books and in the early 1990s it became known as a company that specialized in printing and finishing high-quality graphics. From 1994 to the present, Cuzzi y Cia. has received 11 international awards for its work in the industry. Learn More...