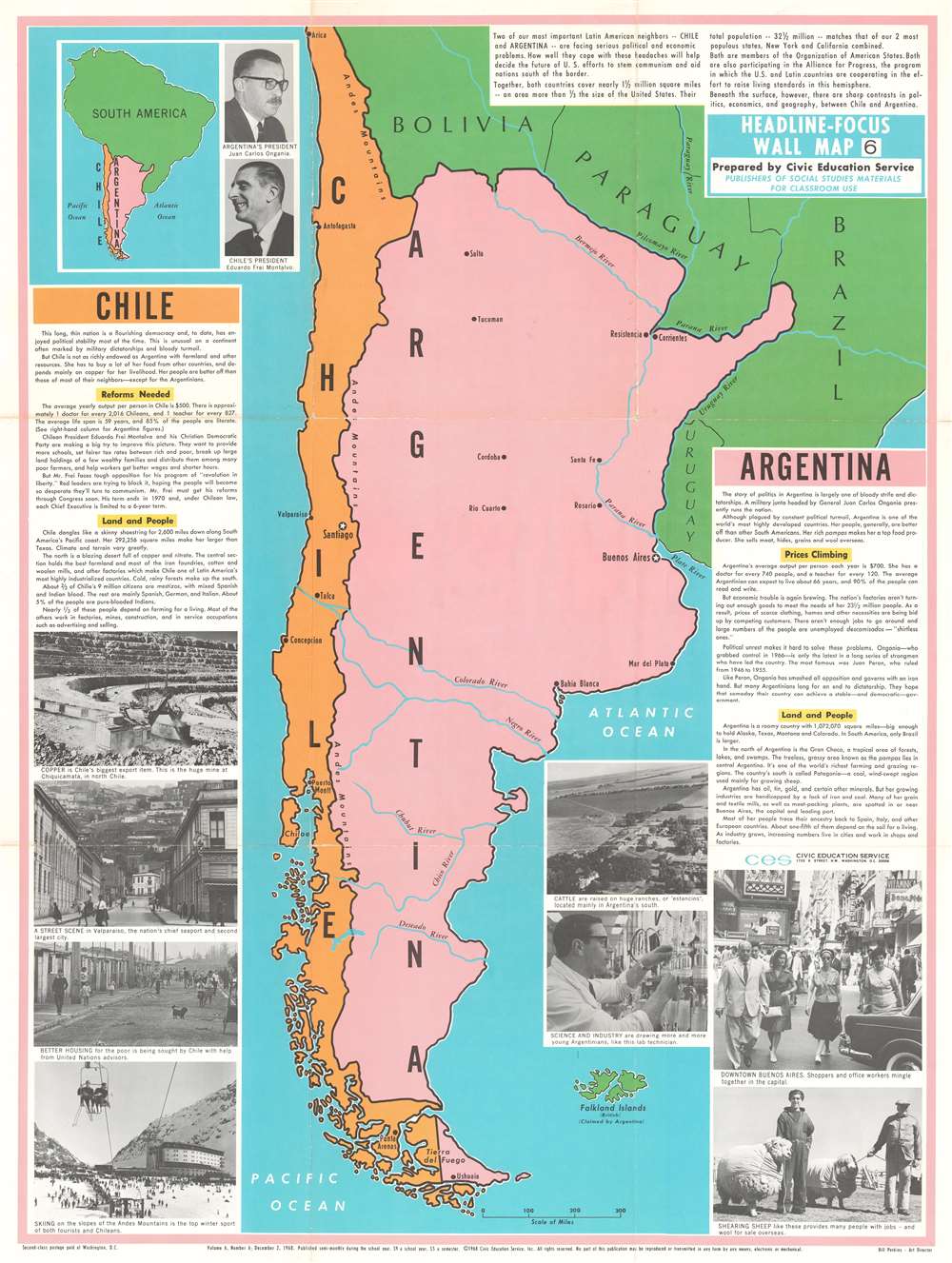 Chile's political stability is questioned while the military junta in Argentina is supported since it was an ally of the United States.

This is a 1968 Civic Education Service map of Argentina and Chile. This map focuses less on the geography of the region and more on its political, social, and economic realities. Cities are labeled throughout both countries, as are rivers and the Andes Mountains, which make up most of the border separating them. A text in the upper right corner summarizes the similarities between the two countries, while text boxes on the left and right sides focus on Chile and Argentina, respectively, shed light on the differences between the two nations.

Chile and This Map

Chile, shaded orange, was led by Eduardo Frei Montalva, the 28th president of Chile, who, per the map, was trying to implement reforms to improve the lives of Chileans. His party, the Christian Democratic Party, tried to open more schools, set a fairer tax rate, and redistribute land from a few large landowners to poor farmers and called this move a 'revolution in liberty'. Of course, this being 1968, reference is made to the possibility that after Montalva was constitutionally bound to leave office in 1970, the country could fall to the dreaded Communists. Later, a few years after this map was published, the Christian Democratic Party supports the military coup that ousts Montalva's successor, Salvador Allende, in 1973. Mantalva later became a vocal opponent of Augusto Pinochet's regime in Chile and was assassinated on January 22, 1982. Both integrated into and below the short political summary provided on the map, the text includes information concerning the Chile's economy and population. Statistics focus on literacy, life span, average income, number of doctors and schools, and the main economic outputs of the country's differing regions. Printed photographs at the bottom of the text box illustrate the 'huge' copper mine at Chiquicamata, a street scene in Valparaiso, and skiing in the Andes Mountains.

Argentina and this Map

The information provided about Argentina focuses on the same social phenomena and allows for a comparison between the two countries with respect to literacy, life span, average income, and number of schools and doctors. Less emphasis is placed on the political situation in Argentina, most likely because a military junta, led by General Juan Carlos Ongania, that had the support of the U.S. government. More emphasis is placed on the economic issues facing Argentina, including the large number of unemployed, and the lack of industrial strength based on small reserves of iron and coal. Photographs capture life in Buenos Aires, the capital, a cattle ranch in southern Argentina, a young chemist at work in a laboratory, and sheep, which are, per the map, 'grown' in Patagonia.

This map was created and published by the Civic Education Service in 1968. This map is not catalogued in the OCLC and we have been unable to locate any other examples on the private market.

The Civic Education Service (fl. c. 1963 - 1972) was a publishing firm based in Washington, D.C. that produced maps and other visual material for academic purposes. Learn More...

Good. Exhibits wear along original fold lines and slight loss at some fold intersections. Verso repairs to fold separations. Blank on verso.
Looking for a high-resolution scan of this?