1948 Pictorial Tourist Map of Northwest Arizona Printed on a Napkin 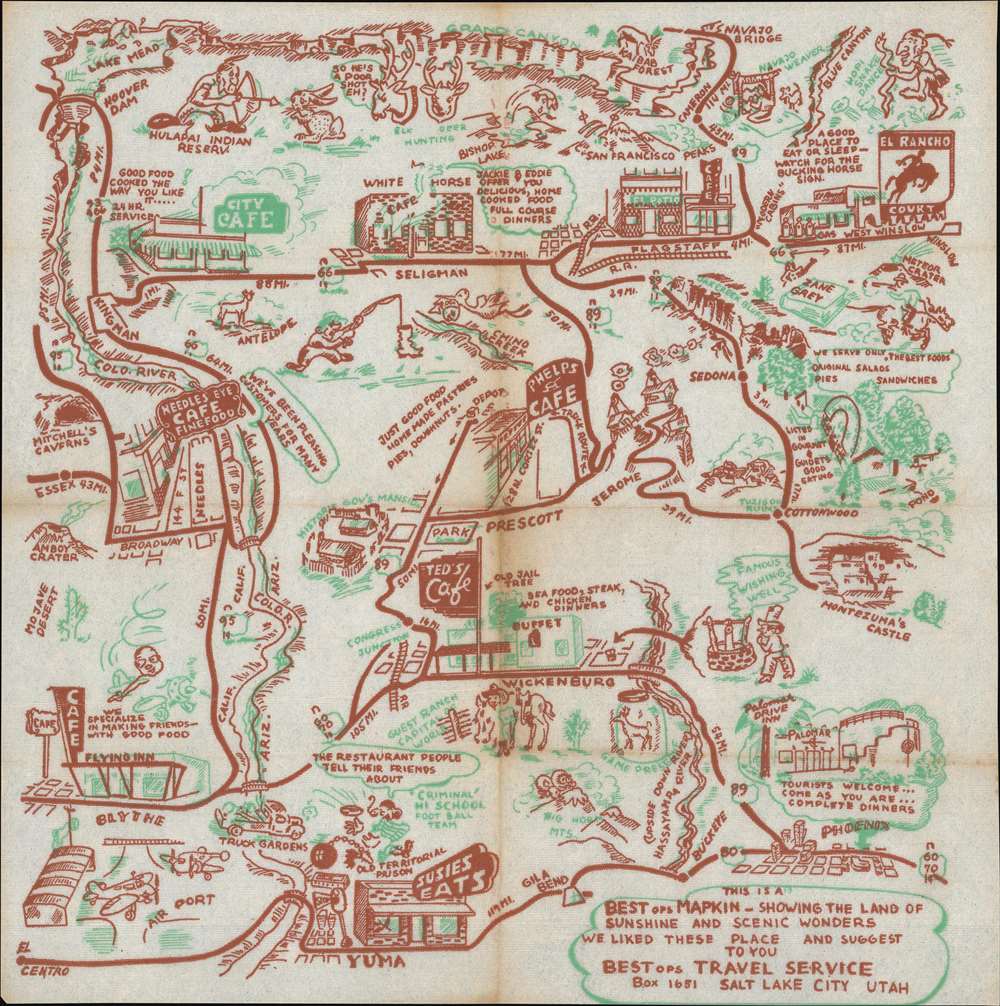 1948 Pictorial Tourist Map of Northwest Arizona Printed on a Napkin

A rare survival: a 1948 map of northwestern Arizona, printed in two colors on a diner napkin. This 'Mapkin' represesnts a pictorial icon of the pre-interstate Arizona road trip, focusing specifically on the region encompassed by Yuma and Phoenix, Arizona in the south, up to the Grand Canyon in the north.

Get Your Kicks On...

Route 66 - variously known as the Will Rogers Highway, the Mother Road, and The Main Street of America features prominently, highlighting the Arizona towns of Winslow, Flagstaff, Seligman, Kingman, and Needles, California. U. S. Route 80, also known as the Broadway of America and the Ocean to Ocean highway, forms the southern border of the map. U.S. Route 89, running from Phoenix Flagstaff, makes one connection between the two great roads. Throughout this area are interspersed a charming array of iconic travelers' destinations - historical sites and monuments, natural landmarks, and recommendable eateries to support the hungry tourists en route from each to the other.

The Business At Hand

The 'mapkin' was intended as an advertising work, not a nostalgia piece, so consequently the businesses named on it were ones that were in operation at the time. Therefore, despite the piece's lack of a date, we can make an estimation based on its content. Flagstaff, Arizona's 'El Patio' café opened in 1948; a date much earlier than this appears unlikely. The White Horse Cafe of Seligman went up for sale in 1947, reopening in 1950 under different ownership than the 'Jackie and Eddie' praised on the map, suggesting a date no later than 1949. The Needle's Eye Cafe suffered the loss of owner/operator Rosalind Swanson in 1947, and it seems unlikely to have long survived that blow; between that, and the presence in Sedona of the 'Rainbow's End Café' (opened 1948) we are confident in positing a publication date of 1948 for this piece. Many of the other attractions shown here were similarly short-lived: El Rancho Court in Winslow had opened in 1947 only to sell, and reopen as Flamingo in 1954. Yuma's 'Susie's Eats' may have opened sooner, but was advertising 24-hour service in 1946; it was still in operation as late as 1950. Wickenburg's 'Ted's Cafe' ran newspaper ads assiduously from 1945 to 1948. A notable exception to this parade of culinary ephemera was the venerable 'City Cafe' on Route 66 in Kingman: opening in 1939, it remained a going concern until the turn of this century, when it was renamed Hot Rod Cafe (alas, closing in 2008 to be replaced, we hear, by a Walgreens. Sic Transit Gloria Mundi.)

the Grand Canyon forms the northern border of the map, but it is not alone in depicting the natural wonders to be found. The Colorado River winds down the left-hand part of the map, which also shows Mitchell's Caverns, Amboy crater, and the Mojave Desert. The meteor crater is shown as well as the Big Horn Mountains between Phoenix and Yuma.

American tourists were drawn by the scenery, but also by the exoticism of the people within it; dating back to the Harvey Houses of the late 19th and early 20th century, the Native Americans of the southwest were a reliable tourist draw. The Mapkin features the Hulapai Indian reservation, a depiction of a Navajo weaver and a Hopi snake dancer; the Tuzigoot pueblo and the misnamed 'Montezuma's Castle' also appear.

In Prescott along Route 89 the Historic Governor's Mansion - now the Sharlot Hall museum - appears prominently. The old Territorial Prison is named in Yuma. Blythe Airport - during World War Two a training base - is shown in the lower left. In the upper left, the modern marvel of Hoover Dam holds back Lake Mead (in which a fish jumps.)

The mapkin was, it tells us, produced by the BESTops Travel Service of Salt Lake City, Utah. We are unable to find any reference to this firm - beyond the existence of two other 'mapkins' of Southern California and the Salt Lake City region. Beyond these three unique examples of separate maps, we have found no others. None are listed in OCLC. Given the purpose and general life expectancy of the diner napkin, as a form, the scarcity of these objects is perhaps unsurprising.