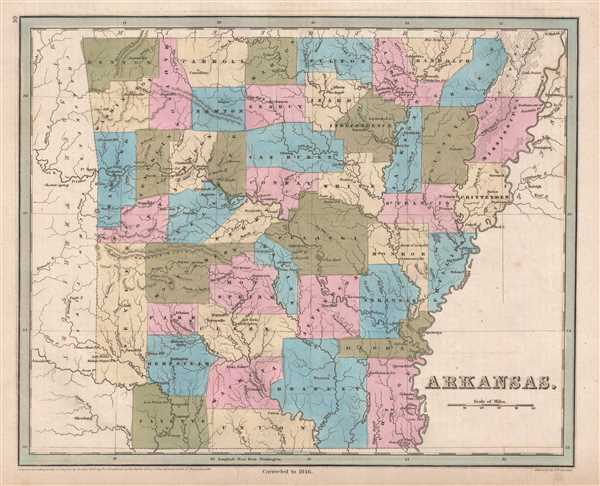 Published only ten years after Arkansas became a state.
$300.00

This is an 1846 Thomas G. Bradford map of Arkansas. The map depicts the region from Oklahoma, labeled here as the 'Missouri Territory', to the Mississippi River, Tennessee, and an unlabeled portion of northern Mississippi, and from Missouri to the Arkansas-Louisiana state line. Counties are illustrated, labeled, and shaded different colors to allow for easy differentiation. Towns and villages are labeled throughout the state are labeled, with Bradford stating, 'Arkansas contains no considerable towns or even villages, the small population being chiefly distributed in scattered settlements'. A highly detailed, yet sparse map, Bradford renders explicitly apparent the lack of urbanization and modern methods of transportation in the state. Railroads and canals are not present, as none had been built in Arkansas at the time. As Arkansas was only admitted into the Union in 1836, it neither had the population centers or the industry to drive the construction of these forms of transportation.

Slavery was a major point of contention when Arkansas petitioned the Federal government for statehood. Geography played an outsize role in the debate over slavery in Arkansas, as owners of cotton plantations in southeastern Arkansas strongly supported the 'peculiar institution', while those surviving on subsistence farming in northwest Arkansas, the 'hill country', opposed slavery. Debate over Arkansas's constitution lasted for twenty-five hours, when finally the decision was made to admit Arkansas as the twenty-fifth state and the thirteenth slave state on June 15, 1836.