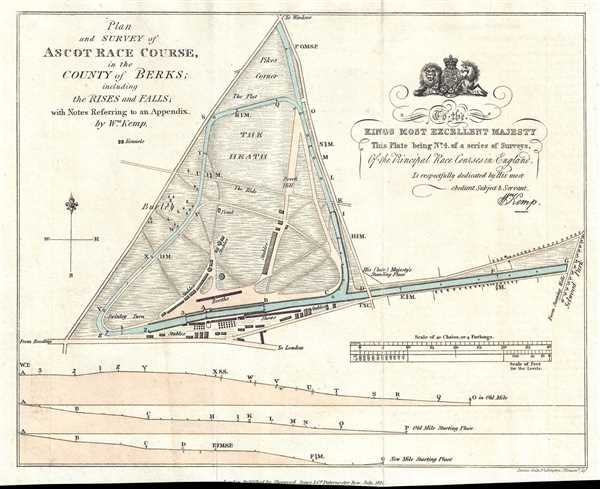 One of a series of surveys created to help owners of race horses select the courses where they wanted to race their horses.

This is a charming 1824 William Kemp map or plan of Royal Ascot Race Course in Berkshire, England. The map depicts the entire race course, which is shaded blue. Along the bottom border, three different profile views of the race course are included, allowing for a more complete understanding of the course. The booths, stables, and shows on the grounds are labeled, along with other locations around the course. Per an advertisement for the first survey in this series, Kemp undertook the creation of the series

to enable the votaries of the Turf to select, with facility, those which are best suited to the properties of their respective horses. This being accomplished by an accurate survey of the ground, and profile representations of the various rises and falls of its surface, take by a spirit-level, accompanied with minute details of the distances from one principal point to another; so that, according to the qualities of the horse, whether of speed, strength, or bottom, the nicest calculations may be made of his power on any particular ground, and the sportsman thereby confide in his own judgment, formed on unerring and systematic principles. By means of these surveys, aided by a good stop-watch, the owner may ascertain, with the nicest precision, the moment when his horse will be at any particular point of the course, whether at the top, bottom, middle, rise, fall, or flat, on hard or soft ground, etc., etc., and thereby successfully calculate his odds, knowing his horse's, and also those of his opponents, power and adaptation to the ground they are upon…These surveys not only describe the position and distances round the middle, the inside, and the outside of the course, but they distinguish the hard and soft ground, the rise and fall of its surface, its boundaries, whether of hedge, bank, post, and rails, single posts, or ropes, and the sites respectively of the stands, weighing machines, starting, distance, and winning posts, etc. as also those of stiles, gates, and buildings and what footways, or horse and carriage-roads, intersect, or are any way connect with, the course.

This survey was produced by William Kemp and published by Sherwood, Jones, and Company. These surveys are quite rare, as very few have ever appeard on the market.

Osher Map Library, 14081.
Looking for a high-resolution scan of this?