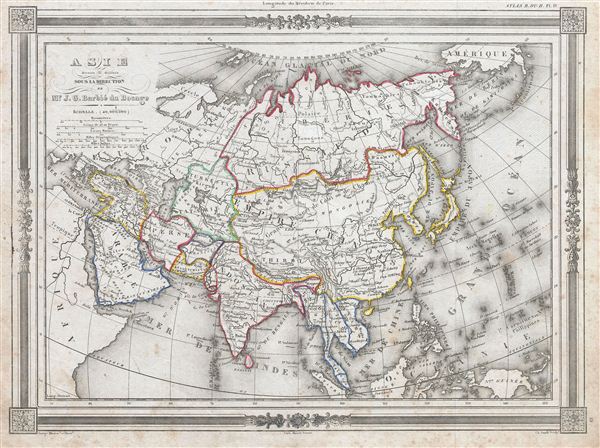 An uncommon and attractive 1852 map of Asia by J. G. Barbie du Bocage. Covers from the Arabian Peninsula and Turkey eastward as far as Kamchatka, Japan, the Philippines and New Guinea. Shows Arabia, Persia (Iran), Hindostan (India), the Chinese empire (including Tibet), the Russian empire, Turkey (in europe and Asia), Beloochistan, Afghanistan, Indochina (Burma, Thailand, Vietnam), Malaysia, Japan, etc. Throughout, the map identifies various cities, towns, rivers and assortment of additional topographical details. As this map was drawn, Imperial China wilted under the weak Qing Dynasty while the Russian attained the height of its pan-continental expansion. Turkey and the Middle east were under Ottoman rule. The map features a beautiful frame style border. Prepared by A. Vuillemin for publication as plate no. 19 in the 1852 Maison Basset edition of Atlas Illustre Destine a l'enseignement de la Geographie elementaire.