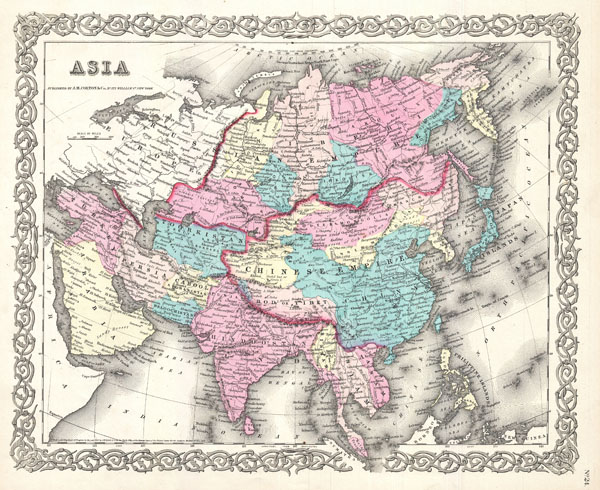 A beautiful 1855 first edition example of Colton's map of Asia. Covers from the Mediterranean to Siberia and from the Arctic to Singapore. Color coded according to regions. Includes Tibet, Korea and Ladak in within the borders of the Chinese Empire. Identifies both the Great Wall and the Great Canal in China. Taiwan or Formosa is mapped vaguely, representing the poor knowledge of the region prior to the Japanese invasion and subsequent survey work in 1895. Afghanistan is divided into Cabool and the southern province of Beloochistan (Baluchistan). Throughout, Colton identifies various cities, towns, rivers and assortment of additional topographical details. Names Singapore, Hong Kong, Macao, Beijing, Shanghai, Edo (Yedo or Tokyo), Mecca, and countless other important cities. Surrounded by Colton's typical spiral motif border. Dated and copyrighted to J. H. Colton, 1855. Published from Colton's 172 William Street Office in New York City. Issued as page no. 24 in volume 2 of the first edition of George Washington Colton's 1855 Atlas of the World.