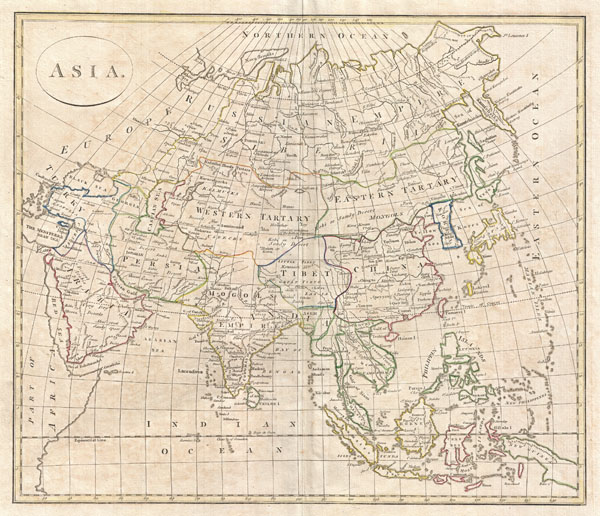 A fine 1799 map of Asia by the English map publisher Clement Cruttwell. Cruttwell's map covers the entire continent from Turkey to Japan and from the Arctic to the East Indies. Our survey of this remarkable continental map begins in the northern regions, which exhibit a primitive yet ephemeral understanding of Arctic geography particularly in Siberia and the extreme northeast where traces of Tschirikow and Vitus Bering's explorations are in evidence. The map centers on the vast stretch of land between the Sea of Korea and Kamchatka and the Caspian Sea, known for most of the 18th century as Tartary. This area was once part of the vast Mongol Empire consolidated under Genghis Khan around 1206 AD. Although the empire of the Great Khan had long since disintegrated into constituent states by the time this map was made, this little known and largely inaccessible region held a special fascination for western Europeans who were reared on legends of the dreaded Mongols or Tartars and their leader, the terrifying Scourge of God. Consequently, much of the geography of Central Asia represented here references these early conquests. Genghis Khan's largly abondoned capital at Kara Koram is noted, as are the silk route trading centers of Samarkand, Bokara, and Kashgar (Cashgar). Further south, the better known regions of Arabia, Persia, India, Tibet, Southeast Asia, the East Indies, Japan and Korea are relatively well mapped. Between Japan and Korea the 'Sea of Korea' or Sea of Japan is noted. Today scholars in both countries are arguing over this sea's proper name, making it an issue of national pride, with each insisting it be named after their own country. Japan itself is only roughly mapped according to a very ancient convention orienting the main island on an east-west rather than north south axis. Hokkaido, here called Yesso, is not attached to Japan but is rather joined to Eastern Tartary or Mongolia. Tibet its worth noting as it includes a much larger area than typically seen on maps of this period, with its northern borders extending well into the Gobi. In Southeast Asia and the East Indies the Straits of Sincapor (Singapore) are noted as is the empire of Siam or Thailand – which is shown to incorporate Laos and Cambodia. Vietnam is divided between the northern and southern kingdoms of Tonkin and Cochin, respectively. India is well mapped reflecting the work of Rennell and others in the region. The entire subcontinent is here shown to be attached to the vast Mogol Empire, which ruled from Delhi. This curiosity suggests that Cruttwell referenced outdated sources, for by the late 18th century the British had conquered most of the region. Outline color and fine copper plate engraving in the minimalist English style prevalent in the late 18th and early 19th centuries. Mountains and topographical other detail shown by profile. Drawn by G. G. and J. Robinson of Paternoster Row, London, for Clement Cruttwell's 1799 Atlas to Cruttwell's Gazetteer.