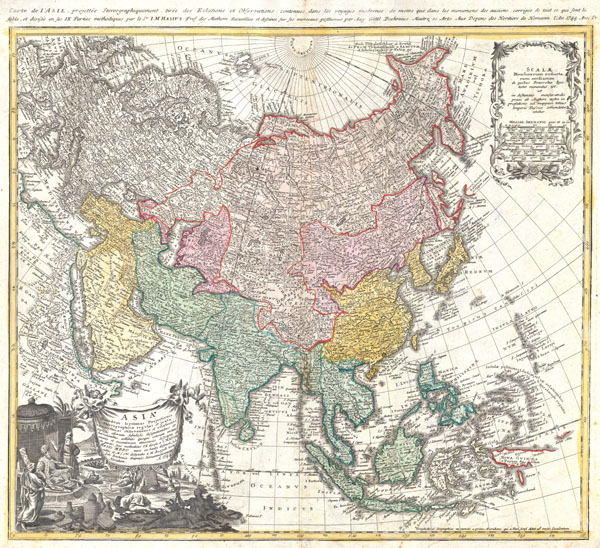 A fabulously detailed 1744 Homann Heirs map of the Asian continent, including the East Indies. Extends from Europe and Africa eastward through Arabia and India to include the East Indies, Siberia, the Philippines, and a partial New Guinea ( Nova Guniea ). The superb detailing of China's interior probably references the work of early Jesuit missionaries to this region. The Kamchatka peninsula has been updated from earlier Homann work to more accurately reflect its actual size. The region of Siberia remains quite primitive in conception and is clearly based on Russian survey work from the 1730s. In Japan, Hokkaido ( Terra Eso, Yedso, Yesfo ) is wildly distended in form and attached to the Asian mainland. To the west of Hokkaido appears a curious partial territory labeled 'Terra Societatis Batavicae' which though considerably deformed, can only be a primitive strike at the archipelago that runs from Hokkaido to Kamchatka. Upper right quadrant features a decorated scale of miles. Lower right quadrant features an allegorical title cartouche depicting an Asian king enthroned and, curiously, what appears to be an American Indian female with a bow, an arrow, and feathered headdress. Along the top of the map, an alternate title reads: Carte de l'Asie, projettée stereographiquement, tirée des relations et observations Atlas compendiarius quinquaginta tabularum geographicarum Homannianarum. This map was drawn by J.M.Haas & Gottlieb Boehm for inclusion the 1752 Homann Heirs Maior Atlas Scholasticus ex Triginta Sex Generalibus et Specialibus…. Most early Homann atlases were 'made to order' or compiled of individual maps at the request of the buyer. However, this rare atlas, composed of 37 maps and charts, was issued as a 'suggested collection' of essential Homann Heirs maps. A fine copy of an important map.

Phillips, Lee Philip, A List of Geographical Atlases in the Library of Congress, Page 157. Yeo, Julie, Mapping the Continent of Asia, Singapore: Antiques of the Orient, 1994, No. 129. Tibbetts, Gerald Randall, Arabia in Early Maps: A Bibliography of Maps Covering the Peninsula of Arabia, Printed in Western Europe from the Invention of Printing to the Year of 1751, New York: Oleander, 1978.
Looking for a high-resolution scan of this?