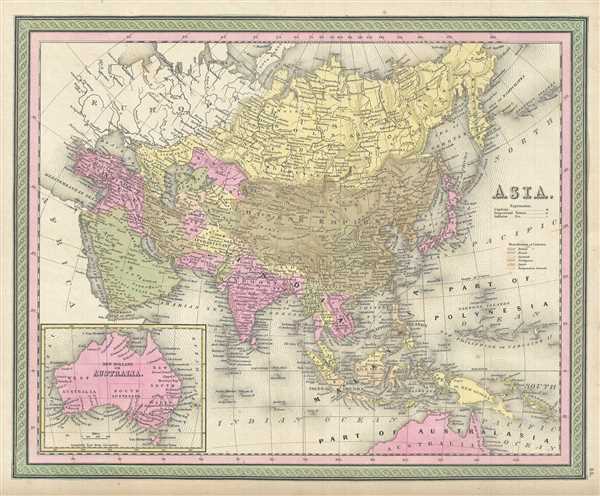 This is a beautiful example of the legendary American map publisher Samuel Augustus Mitchell's 1849 map of Asia. This map covers from the Arabian Peninsula and Turkey eastward as far as Kamchatka, Japan, the Philippines and New Guinea. It includes the Empires of Hindoostan (India), China (includes Tibet), Toorkistan, Persia (Iran), Cabool, Beloochistan (Afghanistan), Birma (Burma), Siam (Thailand), Anam (Vietnam), Malaysia, Japan, etc. Tibet, Korea and Ladak are included within the borders of the Chinese Empire. Identifies both the Grand Canal and the Great Wall in China. An inset map in the lower left quadrant details Australia. This map also identifies various cities, towns, rivers and an assortment of additional topographical details. Map is color coded according to political boundaries with elevation rendered by hachure.