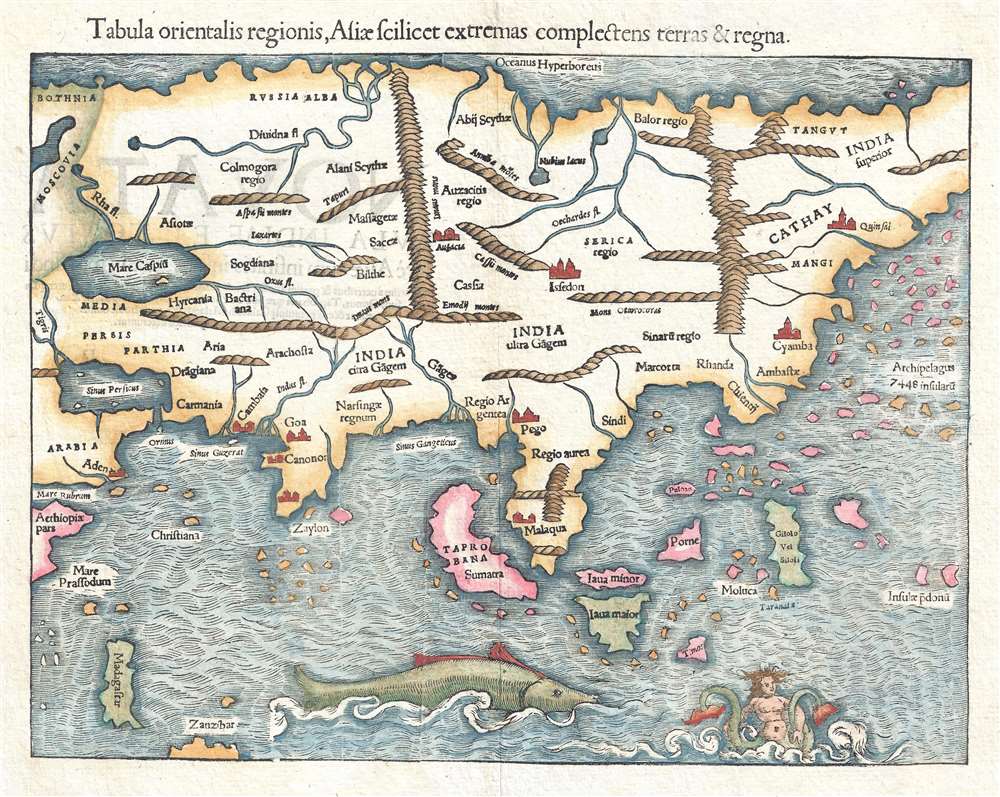 The first printed map of Asia.

This is a c. 1550 Sebastian Munster map of Asia, the first specific printed map of Asia and the earliest obtainable map of the continent. The map depicts the Asian continent from the Caspian Sea and the Persian Gulf to the Pacific Ocean and from the Arctic Ocean to the Indian Ocean. Though based heavily on Ptolemy's work, Munster also blends in information gleaned from recent discoveries made by Portuguese traders and adventurers, including Vasco da Gama. Both the Portuguese outposts of Goa and Calicut, on the Indian subcontinent, are labeled, and the depiction of India is improved, moving closer to a truly accurate depiction, although it is still undersized. The inclusion of Sri Lanka (Zaylon) as an island is also an improvement, though Munster misattributes the historical name for Sri Lanka, 'Taprobana' to Sumatra, which is also placed to the west of the Malay peninsula.

The Portuguese trading post of Malaqua in Southeast Asia is also present. Munster's depiction of Southeast Asia is recognizable, with a few missteps. Java is split in two, illustrated here as Java Major and Java Minor, and Munster keeps Marco Polo's assertion of a vast archipelago in the Pacific made up of 7,448 islands. Munster's depiction of China (Cathay) is also consistent with Marco Polo's writings. Another curious aspect of Munster's map is the continuation of the continent off the page, which is perhaps his way of not committing to whether or not Asia was connected to North America, even though his own map of North America illustrates it as a separate continent.

This map was first produced for inclusion in Münster's modernized Ptolemy in 1540, and was included in all editions of that work. Starting in 1544 it was included among the foretext maps in Münster's Cosmographia, appearing in each edition of that successful and ubiquitous tome until 1578. In various editions it is well represented in institutional collections. The map appears on the market with some regularity, so the collector should be selective in terms of condition.