1867 Hughes Map of Turkey or Asia Minor (Anatolia) in Antiquity 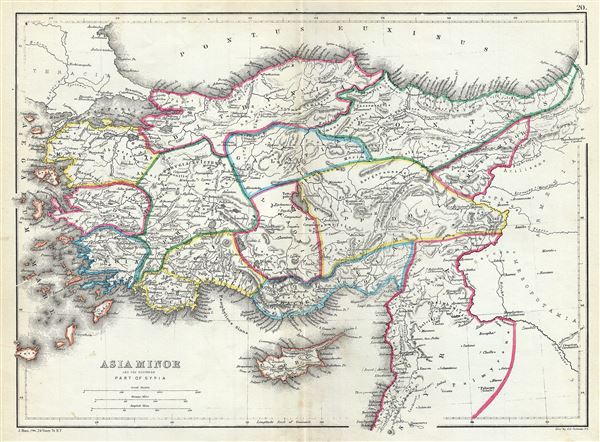 1867 Hughes Map of Turkey or Asia Minor (Anatolia) in Antiquity

This is a beautiful 1867 map of Turkey or Asia Minor in antiquity by William Hughes. It covers from the Aegean Sea to Mesopotamia and from the Black Sea (Pontus Euxinus) to Cyprus and Lebanon. The map shows the ancient Kingdoms of Asia Minor, many of which were Greek colonies or heavily influenced by Ancient Greek culture. These include Lydia, Lycia, Caria, Mysia, Pisidia, Lycaonia, Phrygia, Cappadocia, Bithynia, Pontus, Armenia Minor and others. This region saw the development of currency, the conquest of Troy, as well as the construction of three of the Ancient World's Seven Wonders. This map was created by William Hughes, printed by J. Bien and engraved by G.E. Sherman, for issued as plate 20 in Sheldon and Company's An Atlas of Classical Geography.