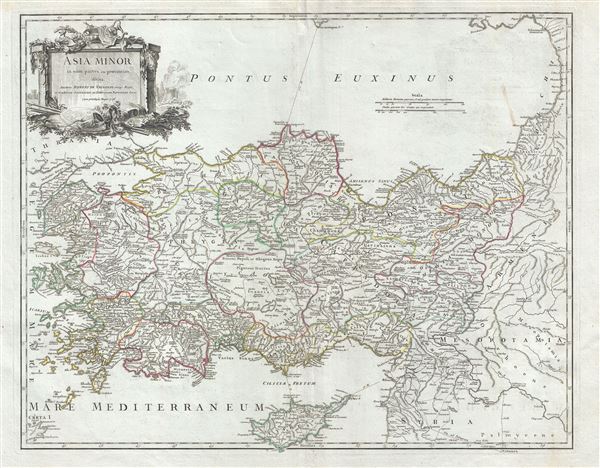 This is a scarce 1756 map of Asia Minor or Turkey by Robert de Vaugondy. It covers from the Aegean Sea to Mesopotamia and from the Black Sea to Cyprus. The map notes the ancient Kingdoms of Asia Minor, many of which were Greek colonies or heavily influences by Ancient Greek culture. These include Mysia, Hellespontus, Lycia, Pisidia, Cilicia, Phrygia, Bithynia, Cappadocia, Armenia Minor, Pontus and others. This region saw the development of currency, the conquest of Troy, as well as the construction of three of the Ancient WorldÂ's Seven Wonders.

Rumsey 3353.011. Pedley, Mary Sponberg Belle et Utile: The Work of the Robert de Vaugondy Family of Mapmakers, 386 state 2.
Looking for a high-resolution scan of this?