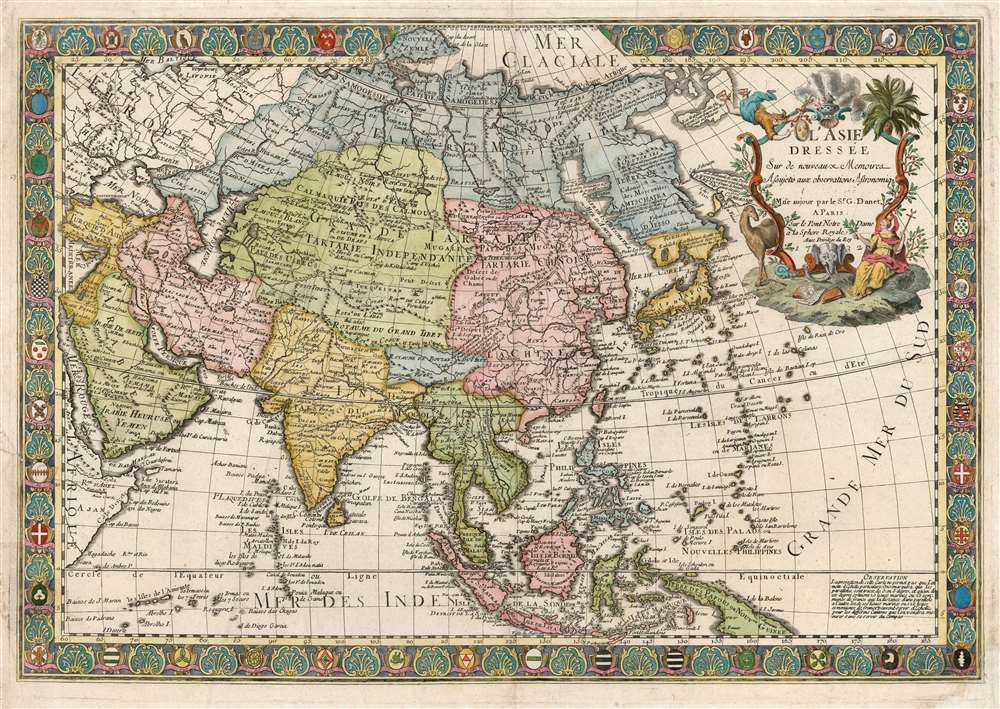 This is a separately-issued 1732 Guillaume Danet map of Asia. While drawing on the decorative tradition of mapmaking exemplified by Danet's father-in-law De Fer, the map's geographical information reflects the work of another great Parisian mapmaker, Guillaume De l'Isle (1675 - 1726). Danet's map is not a slavish copy of De l'Isle: the Parisian's mapping of Asia, as late as 1723, still relied on Nicolaes Witsen's cartography. Danet instead draws on Strahlenberg's cartography - in fact, relying on the versions of that unfortunate cartographer's lost first map that preceded his return to Europe from captivity in Russia.

The map spans from the Arabian Peninsula to the Kuril Islands as found by Maerten de Vries; and from Nova Zembla to Java. Danet's map draws heavily on Guillaume De L'Isle's 1720 map of Asia, particularly for the points from 45 degrees north and below. This is particularly apparent in the mapping of the Caspian Sea and the areas father east. The delineation of Japan and the naming of the Sea of Korea can also be ascribed to De l'Isle.

Danet's treatment of Kamchatka and the Asian northeast does not derive from De l'Isle, but from the work of Philipp Johann Strahlenberg, based upon his own travels and his translation of Abu Al-Ghazi Bahadur's Genealogical History of the Tartars. Moreover, the delineations here do not resemble Strahlenberg's revised, 1730 work, but rather Otten's iteration (circa 1726 - 1730) based on Strahlenberg's stolen and thereafter plagiarized 1715 map of central and northeastern Asia. The text annotations appearing here on the Chuchki peninsula, the north Pacific islands, and Kamchatka are closely paraphrased from the Ottens map. Virtually all cartographic elements north and east of lake Baikal can be traced via Ottens to Strahlenberg. Although Kamchatka remains conflated with Hokkaido (Yesso), the map does name Russian colonies.

Just off the coast of Kamchatka there are several speculative island groups, including Terre da la Compagnie, a mismapping of the Japanese Kuril Islands Kunashir and Iturup (Terre de la Compagnie) based upon the 1643 explorations of Dutch navigators Maerten de Vries and Cornelis Jansz Coen. These last do not appear on the derivatives of Strahlenberg's first map. While they do appear on De l'Isle's maps, they do not do so in the form presented here (with an oblong Terre de Compagnie.

The map's engraving is evocative and attractive. The borders are embellished with a stylized shell motif, interspersed with thirty-nine armorial medallions. These represent Asian empires and cities. Most of those referenced are Japanese, and include the arms (mon) of Japanese noble houses. These latter are derived from the 1715 Adriaan Reland map of Japan.

The allegorical title cartouche evokes the exoticism of the east. The frame of the cartouche itself is intertwined with vines, possibly intended to be nutmeg, but certainly a spice bearing plant. A seated woman in silks, bearing a scepter topped with a crescent and holding a laurel branch, represents Asia. A camel, and an elephant - or perhaps just an elephant head - accompany her. At her feet are books filled with unintelligible scribble, possibly a European impression of Chinese. The cartouche is surmounted with a smoking incense burner. Flying into view from the left (thanks to his winged helmet and sandals) is Mercury, the messenger of the gods and patron of commercial enterprises. He bears not only his cadeuceus, but the royal arms of France, which he points at with his free hand. The French, this says, should benefit from the India trade.

This map was engraved by Jan L'Huillier on behalf of Guillaume Danet for separate publication in 1732. An earlier state of this map, bearing L'Huillier's imprint in the cartouche, is in the collection of the Bibliothèque National de France. In the present example, the engraver's imprint has been excised. We are aware of two later states: one in 1751 under the imprint of Desbois, and another heavily reworked in 1766 by Desnos. The prior state appears only in the Bibliothèque National de France. The amended 1766 Desnos edition is similarly rare. Examples of the present map have appeared on the market from time to time over the past forty years.

Guillaume Danet (1670 – 1732) was a Paris based French bookseller and map publisher active in the late 17th and early 18th century. Danet married Marguerite-Geneviève De Fer becoming the son-in-law of the cartographer and map publisher Nicolas De Fer (1626 – 1720). Along with his brothers and brothers-in-law, Jacques-François Bénard (Besnard) Danet (husband of Marie-Anne De Fer and engraver to the King of Spain) and Remi Richer (an engraver who sold portion of the De Fer business to his brothers in 1721), Guillaume Danet inherited a portion Nicolas De Fer's publishing business in 1720. Both Danet and Bénard used the De Fer name and signage concurrently. Danet maintained a book and map shop on the Pont Notre-Dame. After Danet's own death in 1732, the business was continued by his widow, Marguerite-Geneviève, until about 1746. Marguerite-Geneviève died in 1746 after which many of the De Fer / Danet plates were acquired by Louis Charles Desnos. Learn More...


Jan Luillier, also L'huillier (fl 1655-1731) was a Dutch engraver - or quite probably a family of engravers, given the longevity implied by the spread of dates associated with the name. 'J. Lhuillier' and 'J. Luillier' appeared on maps in both Amsterdam and in Paris from as early as 1655 to the first decades of the eighteenth century: this imprint appears on the maps of Sanson, DuVal, De Wit, Mariette, and Danet. Despite the long anf prolific spread of the Luillier name, virtually nothing is recorded about Luillier's (or the Luilliers') life and work. Learn More...