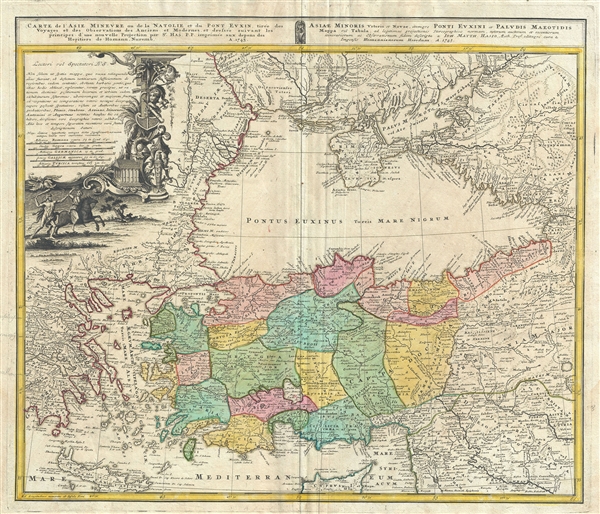 This is an attractive 1743 map of Asia Minor by the Homann Heirs. The map depicts Turkey and the regions surrounding the Black Sea including parts of modern day Crimea, Romania, Russia, Ukraine, Georgia and Greece. Centered on the Black Sea, extends south to Cyprus and Crete and north to include the Sea of Azov. Notes the ancient Kingdoms of Asia Minor, many of which were Greek colonies or heavily influenced by Greek culture. These include Mysia, Lycia, Pisidia, Cilicia, Phrygia, Pontus, Lydia, Caria, Thynia, Phrygia Minor, Cappadocia, Armenia Minor, etc.

This region saw the development of currency, the conquest of Troy as well as the construction of three of the Ancient World’s Seven Wonders. Highly detailed, it notes important cities rivers, mountains and a host of other topographical features. A large decorative cartouche in the upper left quadrant includes a description with illustrations of a temple, two warriors and other medieval and classical accents.

This map was drawn by Johann Matthias Haas and issued by Homann Heirs in 1743.


Johann Matthias (Matyhias) Haas (Hasio, Haase) (Latinized as Johannes Hasius) (January 14, 1684 - September 24, 1742) was a German mathematician, astronomer, and cartographer. Haas was born in Augsburg but is known to have held academic positions in Nuremburg, Leipzig and Wittenberg, where he was a professor of mathematics. He produced several maps for the Homann Heirs firm in addition to several publications of his own. Today is memorialized by a crater on the Moon - Hase Crater. Learn More...