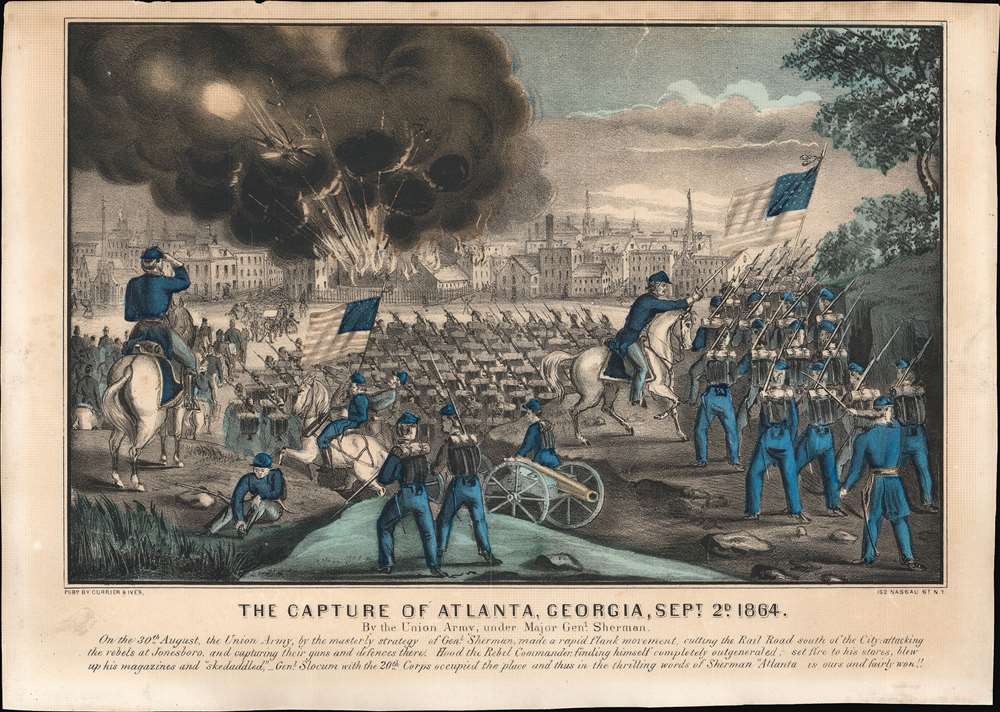 This is a nice example of Charles Currier and James Ives' print depicting the 1864 capture of Atlanta by Gen. William Tecumseh Sherman's forces during the U.S. Civil War. The battle was a key victory in Sherman's 1864 Georgia campaign, which culminated in the 'March to the Sea' and the capture of Savannah. Having seized the rebels' rail hub, destroyed their supply lines, and quite literally cut the Confederacy in half, the campaign was decisive in ensuring the Confederacy's ultimate defeat.

This print shows Union troops marching into the city of Atlanta on September 2, 1864, just after its abandonment by Confederate forces under Gen. John Bell Hood. The exploded Confederate magazines, an act of scorched earth warfare by Hood, are depicted prominently near center. A group of civilians stands near the outskirts of the city with a flag of surrender. The officer on horseback near center may be a representation of Gen. Henry Slocum, mentioned in the description below the image.

The Battle of Atlanta

Gen. William Tecumseh Sherman's capture of Atlanta in July-September 1864 and the subsequent 'March to the Sea' are often seen as the 'nail in the coffin' of the Confederacy. Following Union victories at Gettysburg and Vicksburg the previous summer, momentum had shifted against the Confederacy, but the war's conclusion was far from certain. Gen. Ulysses Grant was put in command of Union forces in March 1864 and pursued a multi-pronged attack on the Confederacy, leveraging the Union's superiority in manpower and materiel. Sherman, one of Grant's most trusted generals, took on Grant's previous role as commander of the Western Theater.

Although still a relatively small city at the time, Atlanta was the rail hub of the Confederacy, and, along with Sherman's 'March to the Sea,' the capture of the city effectively cut the Confederacy (which was also embargoed by the Union Navy on three sides) in half. After evacuating the city of civilians and just before embarking on the march to Savannah, Sherman's forces burned Atlanta to prevent it being used again as a supply hub. Hood's army escaped but was later decisively defeated in Tennessee in the closing weeks of the year. The capture of Atlanta was a major morale boost to the Union cause and came just a month before the 1864 Presidential Election, helping Abraham Lincoln easily win reelection.

This print was published by Charles Currier and James Ives in 1864 or early 1865. Although their images of the Civil War are iconic, original Currier and Ives prints are difficult to come by. We are only able to locate institutional holdings of this print with the Boston Athenaeum, the American Antiquarian Society, and the Museum of the City of New York.

Charles Jacob Currier (February 8, 1819 - December 4, 1887) was an American publisher, lithographer, and engraver active in New York during the second half of the 19th century. He was born in Roxbury, Massachusetts. Currier is often overshadowed by his older brother, Nathaniel Currier, of the Currier and Ives firm. While Charles Currier is sometimes associated with Currier and Ives, and with Nathaniel Currier separately, he also published independently under his own imprint. It was Charles Currier who introduced Nathaniel Currier (1813 - 1888), to his brother-in-law James Merritt Ives (1824 - 1895), who eventually partnered in 1857 to found one of the predominate graphic publishing firms in American history, Currier and Ives. He died in Brookline, Massachusetts and is buried in Greenwood Cemetery, Brooklyn. Learn More...

Good. Some chipping to margins away from printed image. Uneven toning from previous mounting. Light foxing in the margins. Printed on thick paper.