1864 U.S. Secretary of War Map of Atlanta, Georgia during the Civil War 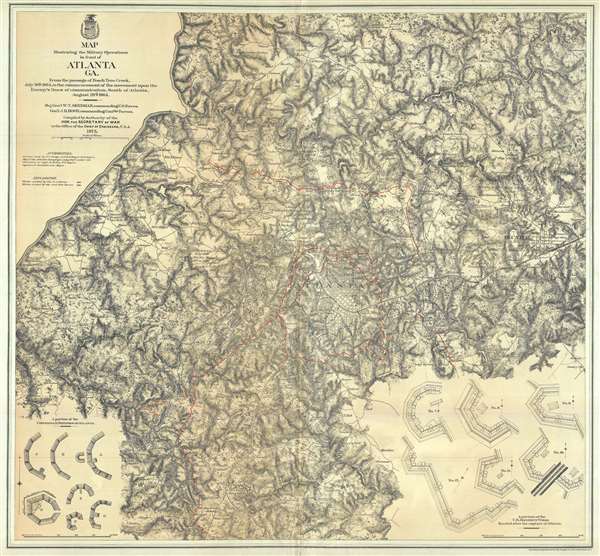 1864 U.S. Secretary of War Map of Atlanta, Georgia during the Civil War

This is a rare separate-issue 1874 map of Atlanta, Georgia, and the area roughly five miles around. The large format map was issued by the War Department in 1874, but depicts Atlanta from surviving war records as it appeared shortly before and during the Battle of Atlanta (July 22, 1864 - September 2, 1864). It is, thus, the most highly detailed map of the Atlanta region, then as now a fast-growing city, during the American Civil War.

This is the best map and most highly detailed map of Atlanta and vicinity to have been published as of 1874. The coverage of the map, extending roughly five miles around Atlanta, all of which is today part of the urban center, is incredibly detailed, with topography, roads and rivers, and individual buildings identified. Even individual home owners and businesses are noted: saw mills, academies, cemeteries, cabinet makers, and more. The focus is, nonetheless, on Civil War activity. Military encampments and fortifications of both the Union and Confederate forces are noted with red and blue color coding.

The Battle of Atlanta was a major battle in the Atlanta Campaign (May 7, 1864 - September 2, 1864) and a pivotal moment in the American Civil War. Atlanta, at the time, was an important Confederate railroad and supply center. With most of the action occurring just south of the city center, Union forces, under William Tecumseh Sherman, engaged Confederate forces commanded by John Bell Hood. Both sides constructed earthen batteries and fortifications, which are noted on the map with blue representing Union lines and Red Confederate lines. (The remains of some of these fortifications, illustrated in the lower left and right quadrants, still exist.) Under Sherman, Union forces ultimately overran Confederate positions and the city surrendered on September 2, 1864. Sherman continued on his famous March to the Sea ultimately capturing Savannah.

The capture of Atlanta had significant political ramifications. Lincoln, a Republican who supported the war, was then up for re-election, running in a tight race against the Democrat George B. McClellan. McClellan ran on a peace platform and advocated a truce with the Confederacy. The victory in Atlanta, which was heavily celebrated by northern newspapers, significantly boosted Union morale and correspondingly Lincoln's campaign, causing him to be re-elected with a public mandate.

There are at least two states of this map. The initial engraving is probably the work of Julius Bien of New York, but it was issued simultaneously by the Graphic Company, which specialized in photo-reprographics in the 1870s. Both Bien and the Graphic Company received a variety of government contracts and, aside from the imprint, the maps are indistinguishable. The present edition, by the Graphic Company is often referred to as the 'Facsimile Edition' because the term is used in the lower right imprint, but in fact, both identical two-color photolithographs. This is a significant piece and is rare on the market, a must for serious Civil War and Atlanta collectors.

Graphic Company (1872 - 1890), or The Graphic Company, was a New York City based printing house based in New York City in the latter half of the 19th century. The company was founded by the brothers James H. Goodsell and C. M. Goodsell. The Goodsell Brothers were born in Michigan and for a time ran a printing business in Chicago which they lost during the 1871 Great Chicago Fire. They moved to New York in 1872, drawing investors and founding The Graphic Company with $500,000 USD in investment capital, much of it from Canada where the company was traded. Among their investors were the prominent Republicans Alexander Robey 'Boss' Shepherd and General Benjamin Franklin Butler. It was originally created as a newspaper, The Daily Graphic, but quickly expanded to other forms of printing. In 1873, they concocted a publicity stunt to build a giant branded balloon to send aeronauts John Wise and Washington H. Donaldson across the Atlantic in just 60 hours – an attempt which ended in disaster in a Connecticut farm field, just 120 miles from its starting point. By 1874, The Graphic Company advertised as general lithographers, engravers, and power press printers, with specializations in commercial lithography (stock certificates, checks, notes, etc), presentation cards, chromolithography, and photo-lithography. Within a year they had become a large and successful printing house, largely due large government printing contracts that may have been dubiously obtained, possibly through investors Sherman and Butler. In 1878 they introduced an additional periodical, The Weekly Graphic. The Goodsells sold their shares in The Graphic Company by at least 1886. By 1888 the company had changed its name to the American Graphic Company. In 1889 it advertised as the Graphic Publishing Company. For most of its time in operation the company was located at 39-41 Park Place, New York. The firm was dissolved by court order in March of 1890. The Goodsell Brothers were also, from 1872, publishers of the Financier, a successful financial journal based at 156 and 158 Broadway, and the Insurance Spectator.