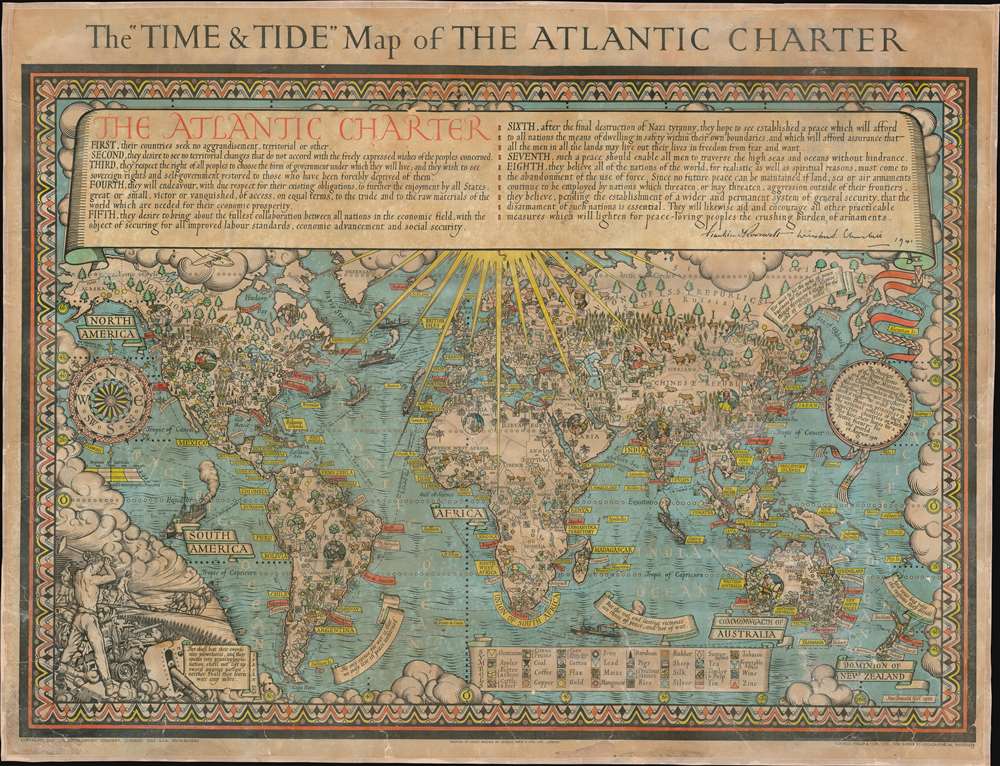 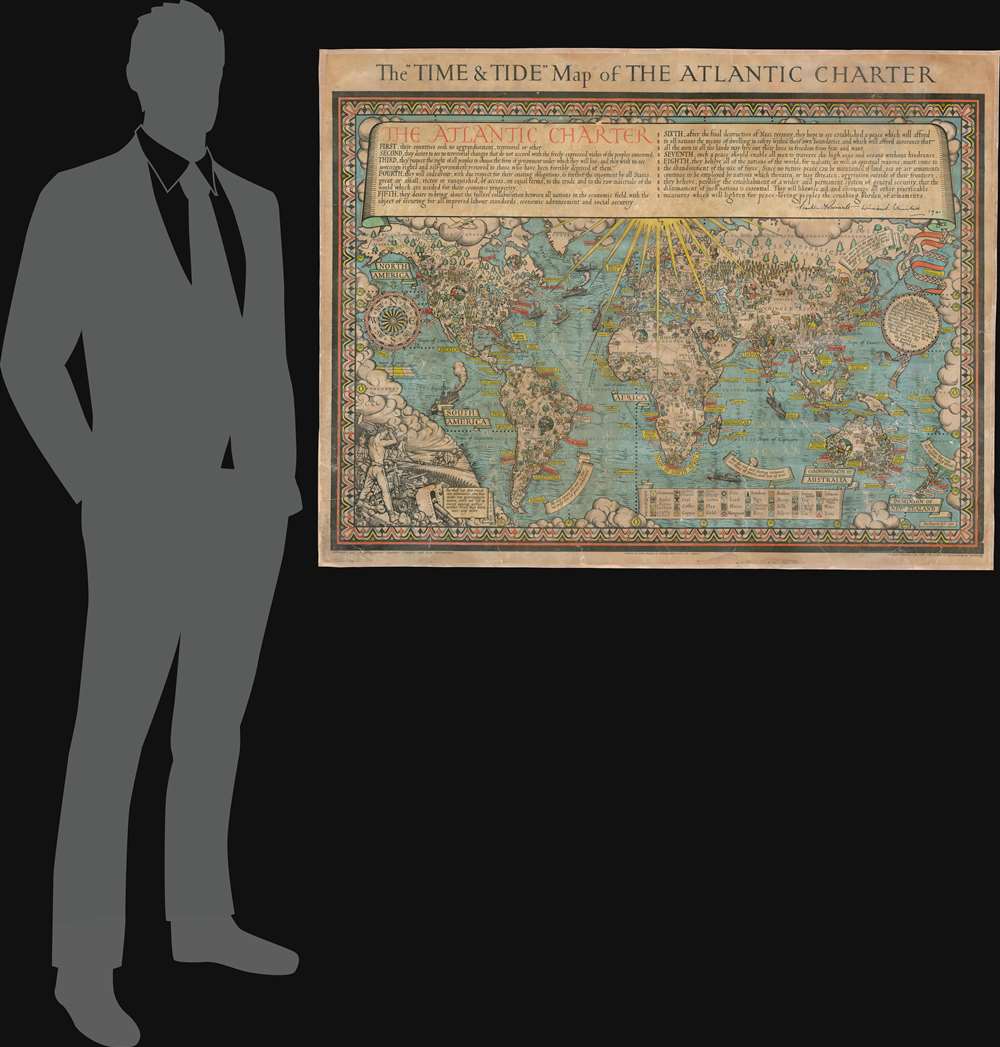 This is a 1942 MacDonald Gill pictorial map of the world celebrating the announcement of the Atlantic Charter, a statement of joint American and British goals for the world after World War II. The map depicts the world using Gall's stereographic projection and places Europe and Africa at center with the Americas to the left and Asia to the right. Pictorial symbols highlight resources, giving the map an air of strategic importance, since natural resources were key to the global conflict then raging. Circular vignettes provide insight into the daily lives of people from walks of life, including a Canadian lumberjack, an American farmer, an Arabian trader, and an Australian rancher. Countries are labeled, as are cities and towns, some with banners, others with text.

The text of the Atlantic Charter is included along the top of the map, proclaiming the eight points agreed upon by President Roosevelt and Prime Minister Churchill, with their signatures at the end. These were real signatures that appeared on the original copy of this work, written on slips of paper and attached before printing. A short declaration opened the Charter with the eight points following. This 'explanation' appears along the right border and is attached to the Charter by a ribbon. The Charter is printed verbatim, just as it was issued by Roosevelt and Churchill. Five other quotations by respected figures such as Cicero, Aristotle, and Ralph Waldo Emerson, also appear. An illustration in the lower left corner depicts a man in the foreground 'beating' armaments, such as field guns and tanks, into plowshares, for the farmer who appears in the background.

The Atlantic Charter was a joint statement made by U.S. President Franklin D. Roosevelt and U.K. Prime Minister Winston Churchill concerning the goals of both their governments for a post-war world. Roosevelt and Churchill discussed the Charter during the Atlantic Conference in Placentia Bay, Newfoundland, ( August 9th and 12th, 1941), which also happens to be the first time Churchill and Roosevelt met. Issued on August 14, 1941 from U.S. Naval Base Argentia, the Atlantic Charter was a statement, meaning that there was no formal, legal document called 'The Atlantic Charter'. When it was first released, the formal title of the statement was 'Joint Declaration by the President and the Prime Minister', or simply the 'Joint Declaration'. The Daily Herald, a London newspaper, coined the term 'Atlantic Charter', but it was not until Churchill used it in Parliament on August 24, 1941 that it became commonplace.

Impact of The Atlantic Charter

The Atlantic Charter was seen as a basis for a just and peaceful world. Once the United States entered the war four months later, the Charter was seen as a statement of Allied war aims. Its focus on self-determination caused particular consternation among the world's colonial powers. Some have pointed to the Charter as influencing the wave of decolonization in the 1950s and 1960s. In its eighth point, the Charter calls for the creation of international organizations, and on January 3, 1942, twenty-six nations signed a 'Joint Declaration of the United Nations' endorsing the Charter's aims. This, and the Charter more broadly, inspired the creation of organizations such as the UN, NATO, and international trade organizations.

Time and Tide was a British weekly political and literary review magazine. Founded by Margaret, Lady Rhondda in 1920 and appearing through 1986, the magazine began as a supporter of left wing and feminist policies and served as the mouthpiece of the feminist Six Point Group. Over the course of its existence, the content of the magazine moved to the political right as the views of its owner changed. Several prominent literary figures published work in the magazine, with C.S. Lewis, George Orwell, D.H. Lawrence, George Bernard Shaw, and Virginia Woolf among its contributors. After Lady Rhondda died in 1958, control passed to Rev Timothy Beaumont and John Thompson. The magazine was never profitable, and was sold in 1962 to Britain Publishing Company, which began publishing it monthly in 1970 and closed in 1979. The title was later purchased by Sidgwick and Jackson, which published it quarterly from 1984 until 1986.

This map was created by MacDonald Gill for the magazine Time and Tide. The separate issue maps were published by George Philip and Son in Great Britain and Denoyer-Geppert in the United States. Several different editions were issued, some in Spanish. We note examples of the present edition cataloged in the OCLC as being part of the institutional collections at Western Michigan University and the University of Illinois at Urbana Champaign.


The Denoyer-Geppert Company (1916 - 1984) was a Chicago-based publishing firm that dealt in maps, atlases, and spherical cartography (globes). For 68 years, the company played a critical role in the education of the world’s students. Founded in 1916 by Otto E. Geppert (the salesman) and L. Philip Denoyer (the cartographer/editor). Denier was born in Milwaukee in 1875 and was a high school principal by the age of 32. He was also completing graduate work at the University of Chicago at the same time. He was appointed the first Professor of Geology and Geography at the State Teacher’s College - La Crosse (University of Wisconsin) in 1909. Legend has it that Denoyer met Geppert while teaching one of his classes, when the latter came up from Chicago to sit in on one. Geppert was working as a salesman for A.J. Nystrom and Company, which today self-identifies as ‘the United States’ older publisher of wall maps and globes for classroom use.’ Geppert was there to sell Denoyer on joining the team at Nostrum, believing that his expertise could benefit the company. Three years later they founded the Denoyer-Geppert Company, and within six years had moved from a 500 square foot space into the 50,000 square foot Swedish-American Telephone Building. By 1922, their catalogue consisted of ‘1,200 maps, charts, globes, and associate aids in teaching geography and history and 800 brilliantly illuminated biological charts and anatomical models.’ In 1967, Denoyer-Geppert was contracted by NASA to build the first official and accurate ‘lunar globe’, based on information gathered by Apollo 10 astronauts. The company made 200 of these globes, the first of which was presented by the astronauts of Apollo 10 to President Nixon. Rand McNally, one of their major competitors, bought out their inventory of maps and globes in 1984. Denoyer-Geppert left the Swedish-American Telephone Building and reinvented the company as the Denoyer-Geppert Science Company, which specializes in anatomical models for classrooms. The Swedish-American Telephone Company has been named a historic landmark and was remodeled into loft apartments. Learn More...