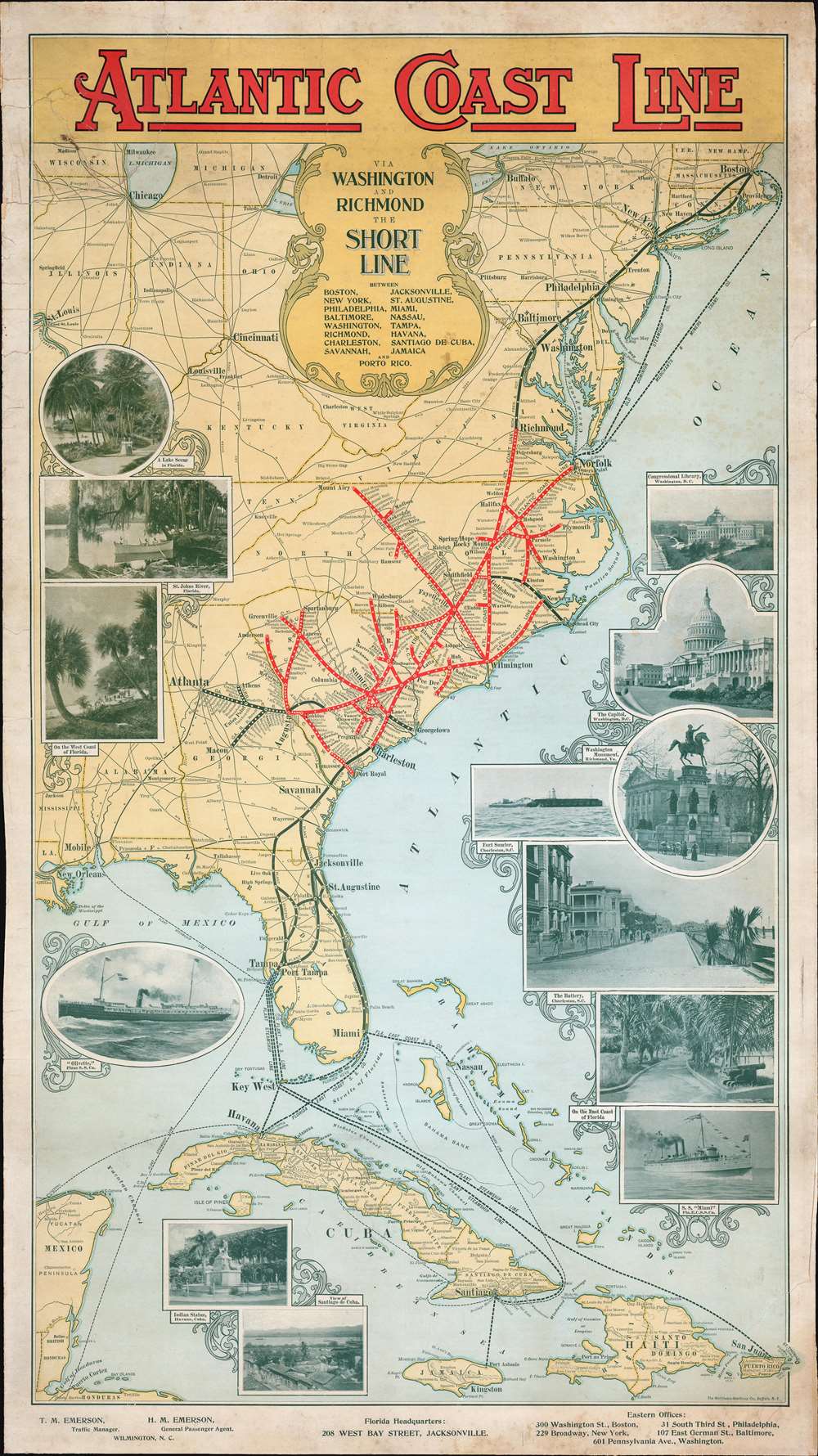 Railroads in Florida and the U.S. East Coast.

An outstanding c. 1898 Matthews-Northrup railroad broadside map of the eastern United States. Depicting the region from Boston to Jamaica and from St. Louis and New Orleans to the Atlantic Ocean, major railway lines throughout the country are illustrated and labeled, along with steamship lines between Florida and Cuba, Puerto Rico, and Jamaica. Thick red lines highlight the route of the Atlantic Coast Line, with white dots marking every station stop. Much less detailed thick black lines illustrate important connecting railroads, including the Plant System from Charleston to Tampa and the Florida East Coast Railway from St. Augustine to Miami. The rest of the extensive rail network in the eastern U.S. is traced by thin black lines bearing the names of their respective railroads. Photographs adorn the left and right borders and promote Florida's mild climate and the history of the American South to a Northern audience.

The Plant System was a network of railroads and steamship lines owned by Henry B. Plant. Plant bought the bankrupt Atlantic and Gulf Railroad on November 4, 1879, and reorganized it as the Savannah, Florida, and Western Railway. Over the following twenty-three years, Plant leased, bought, and built railroad lines throughout the southeastern part of the United States and expanded his railroad system. The entire system was acquired by the Atlantic Coast Line Railroad in 1902.

Dating the Map: the Miami

A photograph of a steamship printed along the right border depicts the S.S. Miami of the Florida East Coast Steam Ship Company. The Miami was launched from William Cramp and Sons of Philadelphia on October 23, 1897. She was 239.2 feet long and had a gross weight of 1,741 tons. Her first trip between Miami and Nassau left Miami on January 17, 1898, making the earliest possible year that this map could have been printed 1898. That is likely the publication year because company's tended to promote their newest and latest acquisitions.

This map was created and published by Matthews-Northrup c. 1898. This is the only catalogued surviving example.

Good. Exhibits slight foxing and toning. Mounted poster style on heavy linen.
Looking for a high-resolution scan of this?