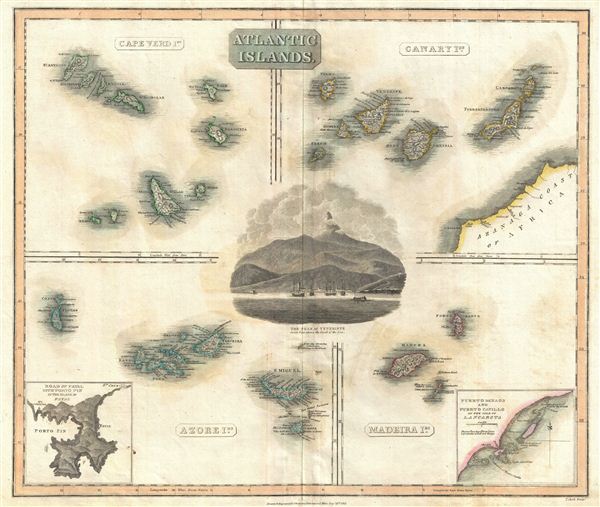 This lovely hand colored 1814 map depicts the Atlantic islands of Cape Verde, the Canary Islands, Madeira, and the Azores, with insets the ports of Fayal and Lancarota (Lanzarote). Though visited mostly for touristic purposes today, in the 19th century and before these island groups were essential stepping stones on the trans-Atlantic shipping lanes between Europe and America.

A large central graphic depicts Tenerife, the largest of the Canary Islands. In the early 19th century Tenerife loomed heavy in the minds of the British, whose national hero, Admiral Horatio Nelson, died in a bold 1787 attempt to seize the island.

The whole is beautifully engraved in the minimalist English style pioneered in the early part of the 19th century. Thomson maps are known for their stunning color, awe inspiring size, and magnificent detail. Thomson's work, including this map, represents some of the finest cartographic art of the 19th century. Relief is shown by hachure with towns, cities, and major topographical features identified.