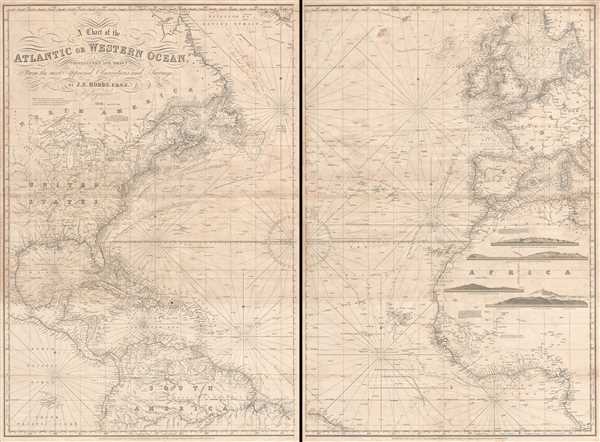 Depicts the Gulf Stream - a current along the coast of North America that effects the climate in the eastern United States and Europe.

This is an exquisitely composed 1855 John Stratton Hobbs nautical chart or maritime map of the Atlantic Ocean. The map, comprising two sheets, depicts the region from central North America and the Galápagos Islands to Sweden, the Baltic Sea, Sicily, and central Africa and from Hudson's Strait, southern Greenland, the Shetland Islands, and Scandinavia to the Galápagos Islands, the mouth of the Amazon River, and the mouth of the Congo River. A highlight of this chart is the illustration of the Gulf Stream along the coast of North America from the Bahamas to the North Atlantic, an ocean current that has a direct effect on climate in both the Europe and the East Coast of the United States. An incredibly detailed chart, myriad depth soundings (measured in fathoms) populate the coastlines of North, Central, and South America, Europe, and Africa, along with the islands of the West Indies, the Canary Islands, the Cape Verde Islands, and the Azores. The soundings are perhaps the densest in the English Channel and St. George's Channel. Coastal locations throughout both sheets are labeled, along with state capitals in the United States and cities and capitals in all the countries of Europe. Several cities are also labeled in Africa, such as Fez, Tangiers, Algiers, Tunis, and Timbuktu. Rivers and lakes in all illustrated regions are also depicted, including the Missouri and Mississippi Rivers and the Great Lakes in North America, the Amazon in South America, the Congo and the Niger Rivers in Africa, and the Loire, Seine, Rhine, Danube, and Elbe Rivers in Europe. Four profile views of islands are included in the vast empty expanse of inland Africa, illustrated Madeira, Corvo and Flores, Palma, and Tenerife, all of which are part of one European country or another.

This chart was originally compiled by John Stratton Hobbs and published by Charles Wilson in 1855.